Forgotten citizens along the Nepal-India border 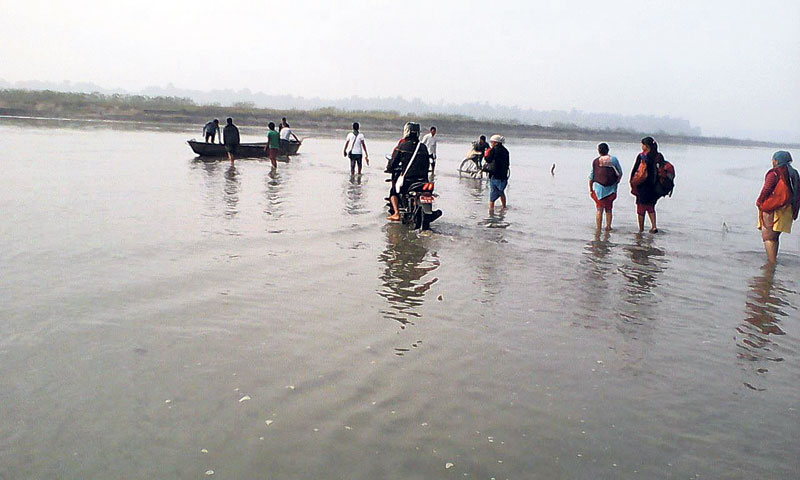 Residents of villages along Nepal-India border in Dang, crossing through the Rapti River to get to the Indian side in this recent picture. (Devendra Basnet/ Republica)

DANG, Nov 23: Seventeen-year-old Sita Pariyar of Bhauwa checkpoint along the Nepal-India border got bitten by a snake on Saturday morning. Subsequently she became unconscious right in the bedroom where she was bitten and breathed her last while being rushed to hospital.

This remote village does not have a health post nearby. The nearest one either in Nepal or India is at least eight hours of walk. Pariyar was being taken to Sirshiya, India as the way to reach there is relatively better for riding cycle than the one in Nepal.

The deceased’s neighbor, Amrit Khadka, feels that her death was due to lack of timely medical attention. “As the hospitals, in Nepal or in India, are not near, we had to first decide which one would be more accessible. After weighing in both options we decided to rush her to India. But she passed away while on the way,” Khadka said adding that if they had a health facility nearby, she would have been alive today.

Kaushila Chaudhari of Bhaisaha Khutti suffered from postpartum hemorrhage, loss of excess blood after childbirth, a few months ago. Though she needed immediate medical attention, her family could not afford it. And by the time they arranged resources for taking her to a hospital in Nepalgunj, it was too late. She succumbed to the excess loss of blood, on her way to the hospital.

“We were carrying her on our back to Nepalgunj hospital in a bamboo basket. It’s a very long walk from here. She died on the way,” said the deceased’s neighbor Mohan Khadka.

“All villages along the Nepal-India border are not connected with proper roads and neither have been provided with medical or educational facilities.”

Dang district shares 82 kilometers of border with India. Within this, there are 26 border points. And it is common for the locals in those villages to meet the fate of the likes of Chaudhari and Pariyar. In emergency cases, patients dying on the way to hospital or succumbing to the condition at home is a common story, locals say.

“Just a few weeks back, two other people had died in our locality. They had committed suicide by consuming poison. They could have survived if they had received treatment on time. So, even though they committed suicide, we feel they died in lack of treatment,” Khadka said.

“Let alone the case of suicide, there are thousands of people in villages along the Nepal-India border who want to live but die just because they don’t receive medicine and doctor when needed.”

In lack of nearby health posts, pregnant women are among the hardest hit. They require medical attention during pre and post delivery period. And some times these needs are urgent. “There has been a serious lack of health facilities in our area and because of that many pregnant women have died untimely,” he said adding that there have been equal number of deaths of children too. “Many newborn have died too. And some die while still in womb.”

These hardships have made the locals feel being neglected by the government. “The Nepal government is not concerned about our needs. And since we are Nepalese, the Indian government would not care for us. We are the forgotten citizens.”

Even though some villages have Nepali hospitals nearer than Indian, they prefer the latter due to better roads. As they have to literally walk all the way to reach Nepali health posts.

“That’s the case. But then, it is not easy going towards India either. It takes long hours to reach Indian health centers though we use cycles,” Khadka informed.

“Regular check up of pregnant women, treatment of cold, fever and so on is done in health posts. In severe cases, patients indeed have to visit better places,” said Pokharel.

Khadka stressed on the need to take immediate actions for availing basic facilities to residents of bordering villages. “Until and unless the government takes serious and urgent measures to address the woes of people living in villages near the Nepal-India border, things are unlikely to change.”

Bhim Oli of Rajpur states that the lack of transportation facility is the actual major problem. If that alone is addressed, people won’t be dying untimely, he said.

“The demand of the people in the border sides is roadways. We are suffering mainly due to the lack of roads,” Oli said. “There are no road networks in 26 border points connecting India,” he said.

I would not say there is anti-India sentiment among the people. But this sentiment is certainly prevalent in certain sections... Read More...

Nepal-India border in Kanchanpur to be sealed for local election

KANCHANPUR, June 13: Nepal-India border points in Kanchanpur district are to remain closed for 48 hours during the upcoming local-level... Read More...