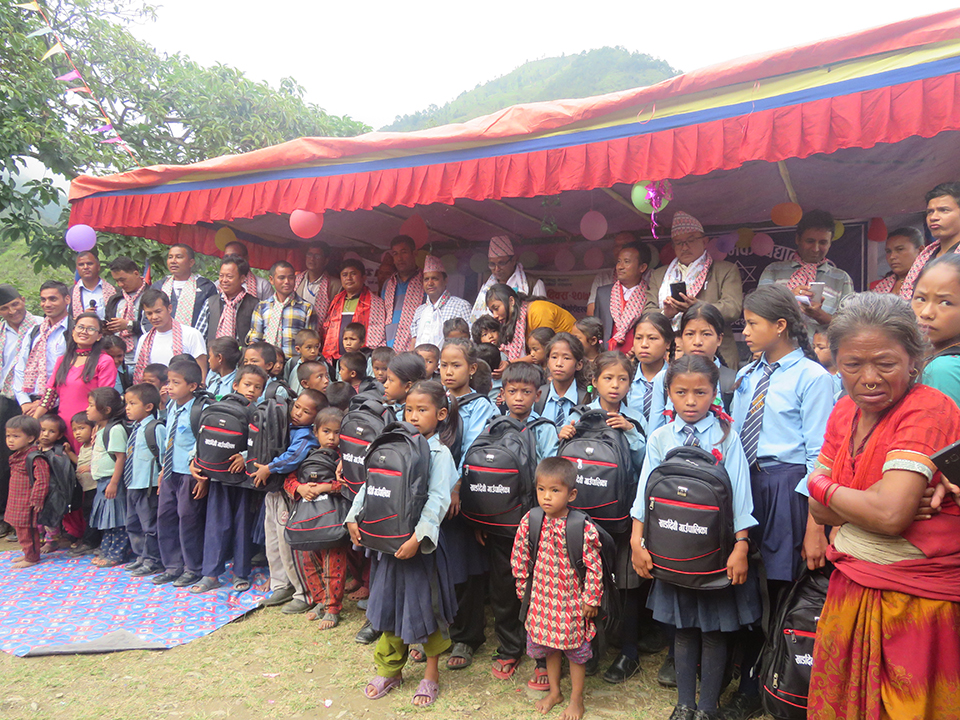 Students belonging to the Thami community pose for a group photo after receiving education materials from local body officials in Khadadevi Rural Municipality, Ramechhap district on Friday. The materials were distributed as part of rural municipality’s plan to increase enrollment and decrease dropouts of Thami students. Photos: Manju Upreti/Republica

RAMECHHAP, Sept 17: When Urmila Thami of Khadadevi Rural Municipality was a small child, something would grip her attention quite often. She liked seeing little kids like her clad in uniform. Later on she understood that that the children in uniforms went to school carrying books in their school bags. She thought her turn would also come one day. However, that never came. She got married at 18 and now at 24, she is a mother of two children. Not only is she unhappy of being deprived of education, but also is equally worried that her children may not be able to continue their education for long.

"I was not able to receive education but I feel good that my children go to school. However, I do not know for how long they will be able to continue their education," said Thami. "Everything in your life is easy if your family is well off. For poor people like us, we have to think of surviving first," she added.

According to Kul Bahadur Karki, principal at the Krishna Secondary School, Thami children attend school up to standard one or two. After that, they start assisting their parents in household chores. Only a very few Thami children continue their education until fifth standard.

"Higher the grade, rarer is the presence of students from the Thami community," Karki said. "This is a marginalized community and it will require a great deal of efforts to bring changes in their life," he added.

Karki stated that it is not possible in the village to find even single Thami child who has passed SLC. Finding even an 8th grader could be a challenge. "This village is home to a lot of Thami people. But if you try to find someone who has passed SLC among them, you won't find," he said.

Urmila reports that sending children to school was not a culture when she was a child, more so in case of girls. However, this has slightly changed over the years. Thami parents do have a sense that education is important. 'But it is not affordable'.

"When I was a child, my family never thought that it was important for me to study. I was never encouraged to go to school. I was never admitted to a school," Urmila said.

"Now I am a parent myself and I dream of our children study higher levels. But you don't get something just by dreaming about it. You have to be capable to fulfill those wishes," she lamented.

Her neighbor Thanaman Thami also shares her views. Thami parents cannot facilitate studies of their children and this is not going to change unless the living standard of the community members is raised. "When you poverty stricken and uneducated yourself, it is unlikely that your children will show interest in studies. And even if they get interested, you might not be able to fulfill their wishes," Thanman said. "There is hardly any elder in our community who is educated," he added.

Thanman is a daily wage labor. He works at construction sites whenever and wherever he gets th opportunity to do so. At other times, he works in his farms. His two children are in standard two and three.

According to a local Dilmaya Thami, a third grader, it is not easy for her in school. Her classmates behave rudely with her and she feels it maybe because she is poor and hails from a poor family.

"There is no one in our home who is educated. However, some of my classmates have educated parents. My friends sometime look down upon me and treat me rudely," she said.

Considering the very low rate of school enrollment and higher rate of dropouts among the Thami children, the local bodies have decided to invest budget for improving such trends. According to Prem Bahadur Tamang, chairperson of Khadadevi Rural Municipality, they have planned to help Thami children pursue not just school level but also higher-level education.

He said that the rural municipality will assist the Thami children to acquire lower and higher education by coordinating with government and non-government agencies for support. "We have shouldered the responsibility for educating every child in our rural municipality. We have pledged to ourselves of doing it. Our special focus will be on the Thami children," he said.

The rural municipality distributed books, stationeries and school bags to 66 Thami children by organizing a function at the school premises. 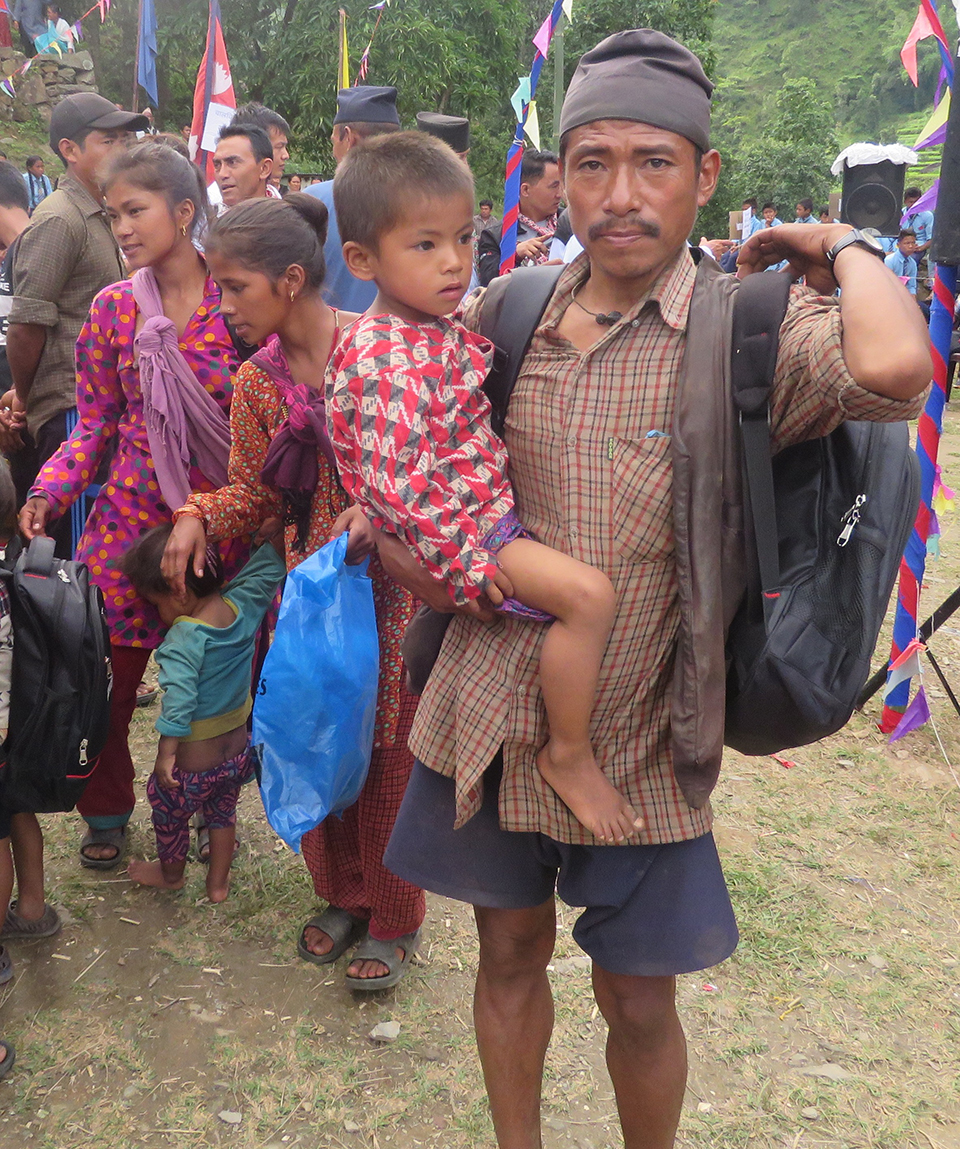 A parent from the Thami community with his child at the stationery distribution function on Friday.