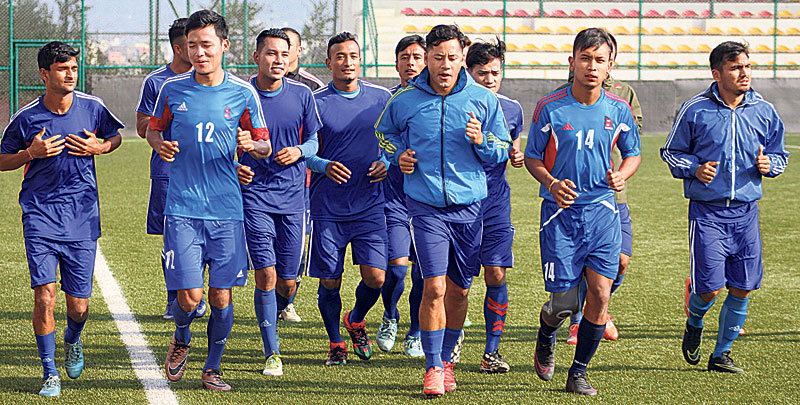 Members of the national football team during a closed camp training session at the artificial turf of ANFA at Satdobato, Lalitpur on Sunday. Photo Courtesy: Anfa

KATHMANDU, Oct 17: The Nepali National Football Team has started closed-camp training for the AFC Solidarity Cup 2016 from Sunday to prepare for the tournament to be held in Kuching, Malaysia from November 2 to 15.

Head coach Koji Gyotoku has called 30 players into the preliminary squad for the closed-camp session ahead of the tournament which came as a replacement to the AFC Challenge Cup that was scrapped by the Asian Football Confederation last year.

The final squad of 23 players will be announced a week ahead of the tournament.

Nepal has been drawn in Group A of the tournament alongside Brunei Darussalam and Timor Leste. The group consisting of Nepal was limited to three teams after two other South Asian nations Pakistan and Bangladesh withdrew from the tournament. Meanwhile, Group B consist of four teams including Sri Lanka, Macau, Mongolia and Laos.

Nepal, which is ranked at 186 in the FIFA rankings, will kick off the competition on November 5 facing 183-ranked Timor Leste at Negeri stadium. Similarly, Nepal will vie against Brunei Darussalam, which is 11 places behind Nepal in the FIFA rankings, on November 8 at Sarawak stadium.  Two teams each from both groups will advance to the semifinals of the Solidarity Cup.

The final match of the newly-launched tournament will be held on November 15 at Sarawak stadium, Kuching.

KATHMANDU, Nov 9: Nepal has entered into the semifinals of AFC Solidarity Cup with a 3-0 victory against Brunei in... Read More...

KATHMANDU, Nov 3: Head coach of the Nepali national football team Gyotoku Koji has said that his team is targeting to... Read More...