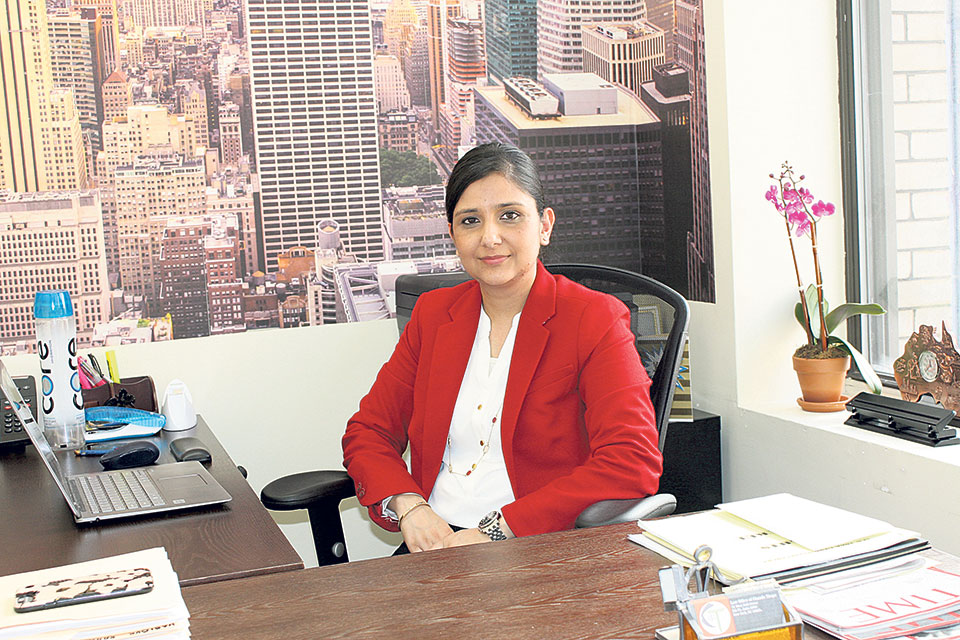 When Chanda Thapa was in school, most of her classmates either wanted to become a doctor or an engineer. And Thapa would often say that she wanted to pursue law, just to be different from her friends.

Even today, Thapa is unlike most of her contemporaries. She has been able to achieve what many Nepali women have only dreamt of. “After moving to the USA, I learnt that many inspirational figures in history such as Gandhi, Mandela, and Lincoln had all pursued legal education. This further stimulated my yearning to become a layer,” says Thapa who is now the first Nepali woman to set up her own law firm in New York.

Thapa has been practicing in areas of U.S. Immigration and Nationality Law, Family and Property Law for over 10 years now. She has served clients from various countries including Nepal and aspires to continue serving these communities in the future as well.

However, her journey of making this childhood fancy into an adult reality was not an easy one. “My first obstacle as a Nepali woman or rather as a foreign student in my pursuit of legal education was to get into law school,” says Thapa. She was told by many that it was not common and even impossible to get admitted to law school in a foreign student status for Juris Doctor (J.D.) program.

The general norm for foreign students in the USA is to apply for L.L.M. degrees after receiving their equivalent foreign law degree. But determined in making her dream into a reality, Thapa applied for a J.D program anyway, not knowing whether she would get in at all.

Luckily, she got into University of Arizona because they considered her local resident owing to the fact that she had attended two years of high school in Tucson, Arizona.

After graduation in 2007, she moved to New York because her brother was living there. Once she passed the New York bar examinations in October that year, she got a job at Chhetry & Associates, P.C. a firm run by Khagendra Gharti-Chhetry.

While working at that firm, she came across many Nepali people who needed legal representation. At the same time, she also learnt that there were no Nepali women attorneys providing legal service in New York and that she was the first Nepali woman to practice law there. “This made me stay in the States and work for immigrants and migrants who needed legal support and representation,” says Thapa.

While working with immigrants, the first barrier she faces on a day-to-day basis is of language. Many people don’t speak English fluently, so it’s a challenge for her to communicate with them. They do use translators to communicate, however, she often feels that many things get lost in translation.

“In some court proceedings when I’m representing clients who speak Nepali, Hindi or Urdu, I can understand what the court translator is saying and I can immediately raise objections to mistranslations. But that skill is not at my disposal when I represent clients from other countries and, at times, people can lose their case due to mistranslations,” says Thapa.

She also feels that having lived in a patriarchal society, some clients come with a pre-conceived notion that a female lawyer will not be equally competent which can sometimes be highly disheartening. But she knows that each lawyer’s job is to zealously represent her/his client. And for that she makes sure she is up to date with the changes in laws and regulations that would affect her clients.

Also, according to her, the paucity of women lawyers all over the world is due to the patriarchal mindset of our societies. She also feels that when it comes to the practice of law, it is a very challenging job especially for a litigator. “A lot of times you have to give time to prepare and present cases which can be extremely tedious. That can take toll on your family life and many women probably opt to salvage their marriages rather than their careers,” says Thapa.

Here, Thapa is quick to mention that her success is largely due to her very supportive family. “My parents placed a high premium on quality education. At no point did they dissuade me from pursuing a legal education even knowing that chances of getting into law school was very slim,” says Thapa. She also has a very supporting husband who has always pushed her to take up the challenges that come with her profession.

Talking about her experience at her own law firm Thapa says, “It has only been a month since I opened my own firm. The best part of the experience is that I’m my own boss now, which is a liberating feeling. I can control the cases I take and manage time according to my own will.”
According to Thapa, the flow of clients at her firm just by word of mouth without any official advertisement during its soft opening has been very encouraging. Though she feels a sense of heighted responsibility now after opening her own firm, she is also confident that she has made the right choice.

The current administration in the USA has changed a lot of policies that has made the lives of immigrant and migrant communities very difficult. This has also affected her work. “People who have lived in the States for decades and have family and economic ties to this country are being deported. I had a client who has lived in the States for over two decades and has a child who is a U.S. citizen but faces the specter of deportation and there are not many legal avenues to help them,” says Thapa. She feels that since clients face harder legal challenges these days, a lawyer’s work has also indubitably become more difficult.

But Thapa takes each case as more than just another assignment. She knows that these cases involve more than just pecuniary gains. Her client’s and their family’s future depends on the cases she handles. Handling each case with professionalism is what every lawyer does but a little compassion is also needed when entire families’ future is at stake. And this is where Thapa rises up to meet the challenge.

However, most law firms in the USA today, catering to the Nepali community, predominantly focus on immigration law. In the future, Thapa plans to expand her practice to estate planning and property law as well.

She also acknowledges the fact that it is difficult for women to succeed in the field of their choice but it’s definitely not impossible. Addressing other young Nepali women Thapa says, “Be bold, be confident and never fear your own smartness or success. There might be many who will want to pull you down. But, at the end of the day, you will need to stand up for yourself.”

Walking on the way, With new hopes and aspirations , Cheering  the life though it might be   Bliss or... Read More...