Environmental balance must be focused in development: PM Oli 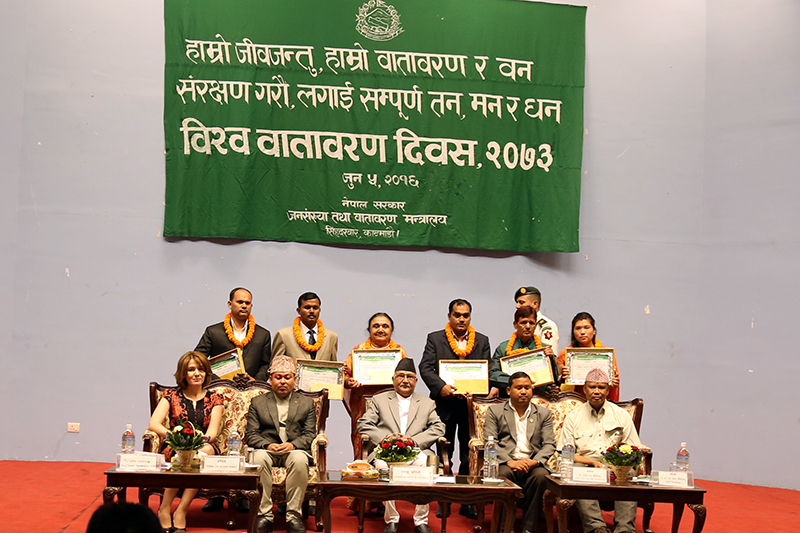 Addressing a programme organised by the Ministry of Population and Environment here today on the occasion of the World Environment Day, Prime Minister Oli said development works should be carried out only after completing a study of its impact on the environment.

"Efforts taken for environment protection are not sufficient," he added. Developed countries are responsible for large-scale carbon emission and subsequent steady rise in global temperature as a result of unnecessary exploitation of natural resources.

"People residing in the terrestrial lands are the most affected as a result of consequences of coastal pollution and snow melting, the Prime Minister said, adding that our efforts be focused on saving the Earth, the beautiful planet in the universe and its life."

President of the Environment Committee under the Legislature-Parliament Janakraj Chaudhary shared that the committee has directed concerned sector to work in relations to environment conservation and that it has been monitoring the progress.
Secretary at the Ministry of Population and Environment Dr Bishwonath Oli said that the issue of environment conservation should not only be connected to the day to observe it, instead be linked up with day-to-day lifestyle of people.

Deputy Country Director of the United Nations Development Programme Sophie Kemkhadze and Prof at the Tribhuvan University Dr Ram Prasad Chaudhary spoke about the negative impact of climate change and on working together to conserve environment.
On the occasion, various individuals and organisations contributing to conserving environment were honoured. RSS