Flora Expo to be held in Kathmandu from Friday 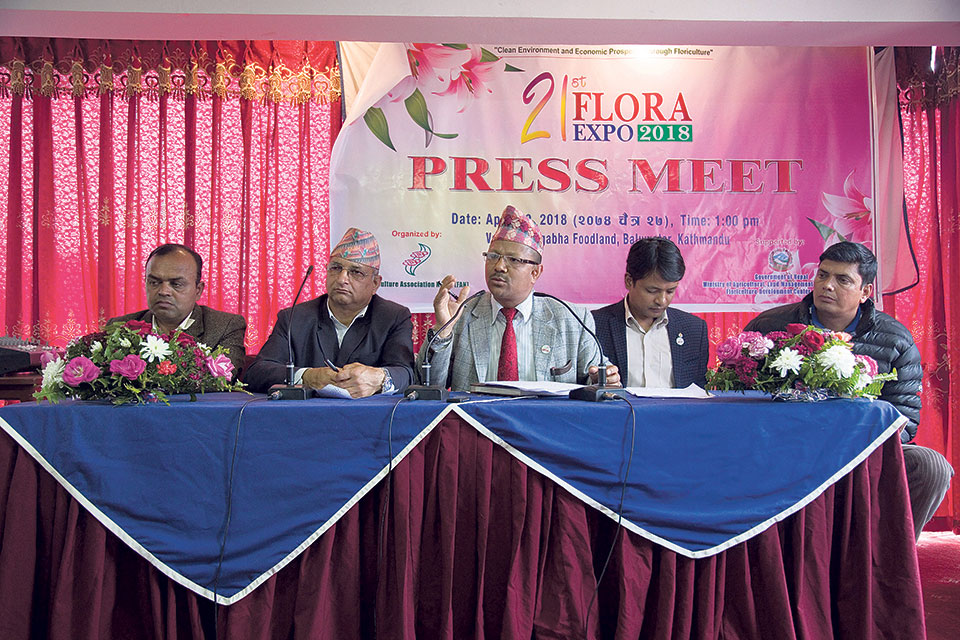 Minister for Agriculture, Land Management and Cooperatives, Chakra Pani Khanal, is scheduled to inaugurate the expo. The expo, which is being organized to promote and develop floriculture industry, will be organized till Monday.

Speaking at a media briefing on Tuesday, FAN President Kumar Kasaju Shrestha said that the expo will feature 82 stalls, including 22 informative stalls which will provide information about country's floriculture industry as well as including new technology and ideas.

“We aim to provide an insight to the public about the quality of flower produced in Nepal. We also want to demonstrate the technology that is available in the Nepali market,” said Shrestha. He added that the association we will be emphasizing production and technology in the floriculture industry this year.

According to event coordinator Ramji Prasad Timalsina, the association will also award florists who have contributed much to the flower industry of Nepal.

Talking to Republica, Shrestha lamented that the government was not acknowledging the contribution of florists. “This is why we are awarding best florists through a competition which will be organized on the sidelines of the expo.”

The expo will showcase 450 species of flowers from all seven provinces of the country.
FAN expects 60,000 flower enthusiasts to visit the expo and have a total transaction of of around Rs 7.5 million.

Total turnover of country's floriculture industry was at least Rs 1 billion last year. It is growing by 10 to 15 percent every year. Similarly, the industry employs around 43,000 people, according to the association.

The expo will be held at Bhrikuti Mandap Exhibition Hall.

KATHMANDU, April 14: Flora Expo 2018 has kicked off in Kathmandu. The 21st edition of the expo, organized by Floriculture Association... Read More...

KATHMANDU, March 30: The Department of Food Technology and Quality Control is organizing a two-day food expo at the Bhrikuti Mandap... Read More...

Nepal Open Taekwondo Championship is going to held in Kathmandu- 2017