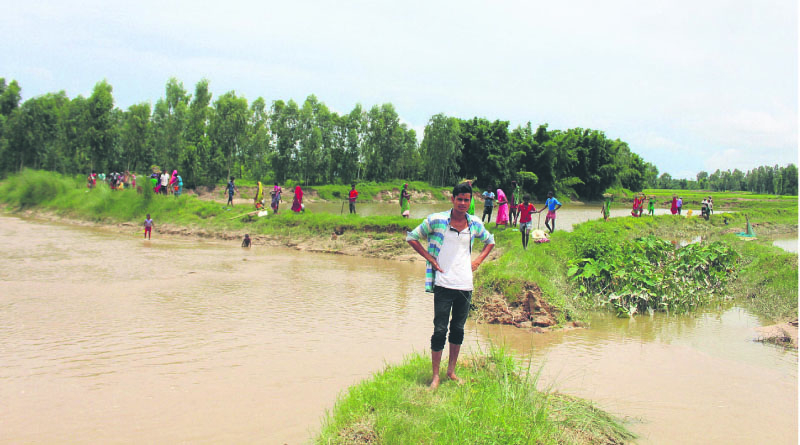 JANAKPUR, Aug 14: Incessant rains for the last three days have massively damaged the agricultural sector of the district. Paddy fields and fish ponds were most affected by the floods, according to District Agriculture Office (DAO) Dhanusha.

According to Badri Prashad Sah, crop development officer of DAO Dhanusha, rains and floods have completely destroyed 25 percent paddy fields of the district in the last three days.

“After the rainfall stopped on Monday, all of our agricultural officers have been deployed on the field to take stock of the damaged areas,” he said: “According to preliminary reports, almost 50 percent of the total planted area has been damaged and half of them have been covered by sand.”

The farmers, who waited for rains to irrigate their fields for paddy plantation, started planting paddy from mid-July using pump sets to supply water. But due to excessive rainfall, their growing crops have been ruined, according to a local farmer Mahendra Yadav.

Meanwhile, flood has swept away fishes from fish ponds spread across 100 bighas of land in Pakariya and Sakhuwa areas of Chhireshwornath Municipality of the district.

Amar Kishor Singh, a local fish farmer of Pakariya, claims that his losses amount to Rs 30 million. “Flood from Aurahi river swept away four million hatchery fishes and other ready-to-eat fishes from my ponds,” Singh said. His ponds were spread over six bighas of land. He said the flood swept away more than 10 tons of fish from his ponds.    Likewise, Rahul Sah and Khursed Rayin of Pakariya, who had partnered for fish farming, lost their fishes from their two bighas of fish ponds.

“While our friends went to foreign countries for labor, we stayed here hoping to do something,” Khursed told Republica. “We started fish farming, but now it has all gone in vain.”

Sah and Rayin have demanded that the government conducts a study of their damage and provides them compensation.

Meanwhile, Minister of Agriculture Ram Krishna Yadav reached the damaged area for the inspection on a helicopter. He has directed the district agriculture and livestock office to collect overall details of damages and make recommendation for compensation.

The minister, who inspected Dhanusha, Mahottari, Sarlahi, Siraha and Saptari districts from helicopter, said that the government is preparing to provide suitable compensation to the victims, in order to encourage the youth who have ventured into agriculture.
Minister of Drinking Water and Sanitation, Mahendra Yadav accompanied the agriculture minister to inspect the damaged areas of tarai. He said that his party, Nepali Congress, has mobilized all lawmakers and ministers from the tarai districts for rescue and relief of victims.

Plantation completed in 50% of paddy fields in 14 districts

KATHMANDU, July 4: Paddy plantation has been completed in 50 percent of paddy fields in 14 districts. According to the... Read More...

KATHMANDU, July 1: According to the officials, plantation has been completed in 20.2 percent of the rice fields so far.... Read More...

Eleven houses swept away by floods

MYAGDI, Sept 2: Eleven houses were swept away by floods in the Khahare river in Beg-6 of Myagdi. ... Read More...