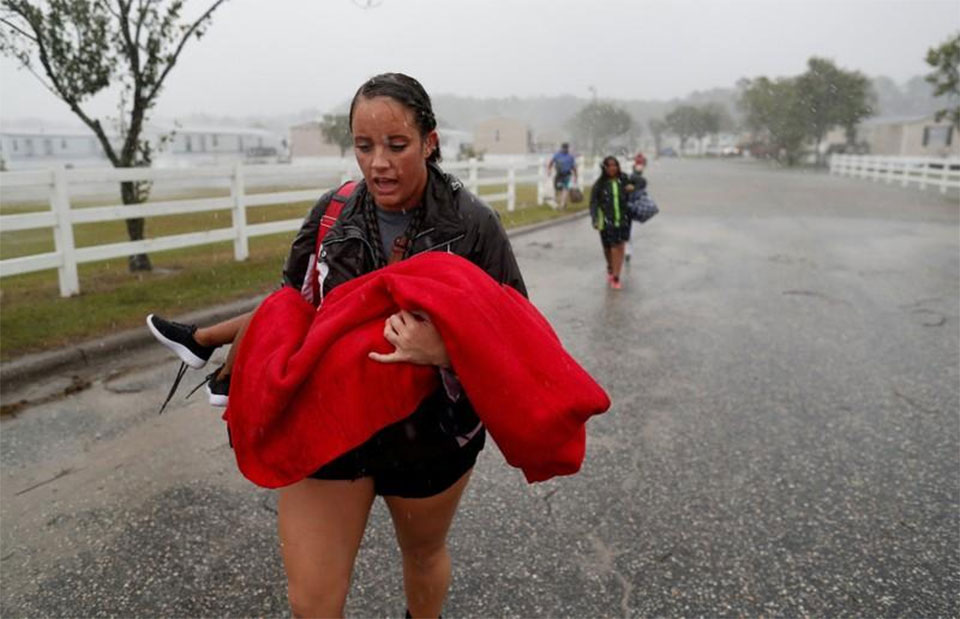 WILSON, N.C. Sept 16: Tropical Storm Florence dumped “epic” amounts of rain on North and South Carolina as it trudged inland on Saturday, knocking out power and causing at least eight deaths as flood waters that have devastated many communities kept rising.

Florence’s intensity has diminished since it roared ashore along the U.S. mid-Atlantic coast on Friday as a hurricane. But its slow march over the two states, crawling west at only 2 miles per hour (3 km per hour), is expected to leave large parts of the region deluged in the coming days.

“This system is unloading epic amounts of rainfall, in some places measured in feet and not inches,” North Carolina Governor Roy Cooper told a news briefing. His state has already endured record rainfall, with much more forecast to come. Rivers will continue to rise days after the rain has stopped, he said.

“This is a hurricane event followed by a flood event,” said South Carolina Governor Henry McMaster.

With flood waters advancing rapidly in many communities, stranded people were being rescued by boat and by helicopter, while tens of thousands of others hunkered down in shelters. Numerous roads were closed, and authorities warned of the risk of landslides, tornadoes and flash floods, with dams and bridges in peril as rivers and creeks swelled.

Utility crews worked to restore electricity. As of Saturday afternoon, about 752,000 homes and businesses were without power in North Carolina, along with 119,000 in South Carolina.

Helicopter crews have carried out dozens of missions in coastal North Carolina and helped in the rescue of 50 people and eight pets, said Petty Officer Michael Himes of the U.S. Coast Guard.

At 5 p.m. EDT (2100 GMT), the National Hurricane Center said Florence had maximum sustained winds near 45 miles per hour. It said it was located about 60 miles west of Myrtle Beach, South Carolina, and forecasters predicted a slow westward march.

The center said the storm would dump as much as 40 inches (102 cm) of rain along coastal areas of the Carolinas, as well as up to 10 inches in southwestern Virginia.

In Fayetteville, a North Carolina city of about 210,000 people about 90 miles inland, authorities told thousands of residents near the Cape Fear River and Little River to get out of their homes because of the flood risk.

“If you are refusing to leave during this mandatory evacuation, you need to do things like notify your legal next of kin because the loss of life is very, very possible,” Mayor Mitch Colvin said at a news conference.

Officials said there had been at least seven storm-related fatalities in the state.

Authorities in South Carolina reported one death, saying a woman was killed when her vehicle struck a fallen tree.

The storm made landfall on Friday near Wilmington, a city of about 120,000 squeezed between North Carolina’s Atlantic coastline and the Cape Fear River. On Saturday, its streets were strewn with downed tree limbs and carpeted with leaves and other debris. Electricity remained out for much of the city, known for its historic mansions, with power lines lying across roads like wet strands of spaghetti.

“The fact that there haven’t been more deaths and damage is amazing and a blessing,” said Rebekah Roth, walking around Wilmington’s Winoca Terrace neighborhood.

Florence has already set a North Carolina record for rainfall totals, exceeding that of Hurricane Floyd, which struck in 1999 and caused 56 deaths. Floyd produced 24 inches of rain in some parts of the state, while Florence has already dumped about 30 inches in areas around Swansboro.

In New Bern, about 90 miles northeast of Wilmington at the confluence of two rivers, Florence overwhelmed the town of 30,000 and left the downtown area under water. Some area residents described a harrowing retreat as the storm hit.

“It was pitch black and I was just scared out of my mind,” said Tracy Singleton, who with her family later drove through torrential rain and high winds from her home near New Bern.

More than 20,000 people were in 157 shelters in North Carolina, with nearly 6,000 in South Carolina shelters, officials said.

South Carolina authorities said law enforcement officers were guarding against looting in evacuated areas, while Wilmington set a curfew on Saturday evening in response to looting in one area.

Schoolteacher Leslie Ochoa said she and her family loaded up 10 adults, 5 children, 14 goats, 10 dogs, two cats and one guinea pig and evacuated from Jacksonville, North Carolina to Columbia, South Carolina last Tuesday. As her son fed the goats in a hotel parking lot, she said she might not be able to return home until the middle of next week.

“Our friend behind our old house, they have gators swimming in the water. So yeah, not safe,” Ochoa said.

As the United States dealt with Florence, a strong typhoon tore across the northern tip of the Philippines, killing at least three people, wrecking homes and triggering landslides before heading toward Hong Kong and southern China.

‘Big and vicious’: Hurricane Florence closes in on Carolinas

RALEIGH, September, 10: Florence rapidly strengthened into a potentially catastrophic Category 4 hurricane on Monday as it closed in on... Read More...

Fenella Fielding, star of ‘Carry On’ comedies, dies at 90

LONDON, Sept 12:  Fenella Fielding, a British actress who was the glamorous, velvet-voiced star of the “Carry On” comedies, has died.... Read More...