Flood victims to vote for those who'd provide 'safe housing' 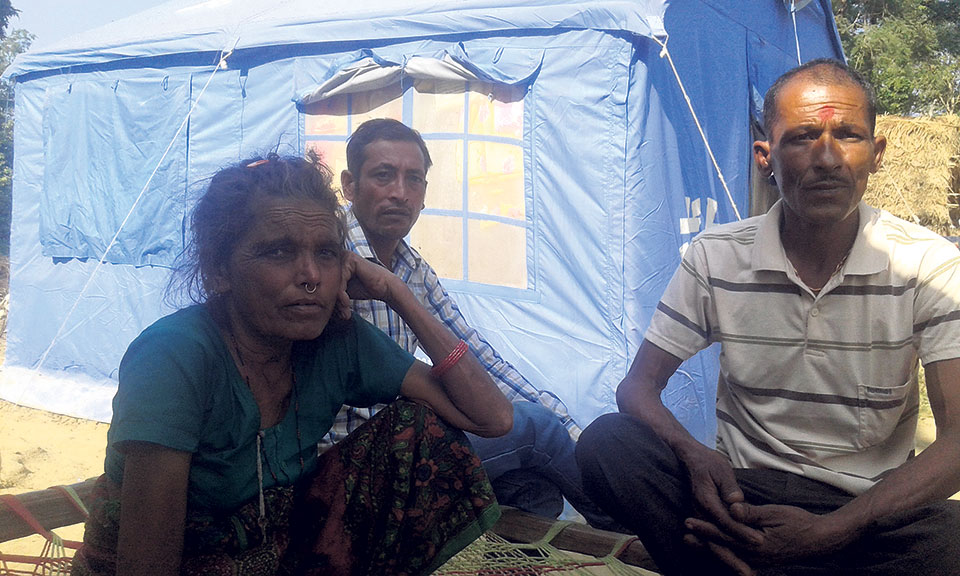 Sixty-five years old Hime Khatri and other flood victims outside their tent at Raptisonari in Banke district last week.

BANKE, Nov 6: Hime Khatri, an elderly woman of Raptisonari Rural Municipality-2 in Banke district, has been living under tarpaulins for the past two and a half years. As the election fever has gripped the whole country, she too knows that the upcoming parliamentary and provincial elections are being held on November 26 in the district. And her plan is to vote for that candidate who would ensure secure shelters for the displaced flood victims like herself.

“In the previous elections, many came to us making different promises which haven't been fulfilled. This time, however, we are going to vote for only that candidate who can guarantee safe shelters for us,” said the 65-year old.

Raptisonari Rural Municipality falls under constituency-1 of parliamentary elections and 1 (a) of provincial elections. The locals living there have elected different political parties at different times. For instance, they elected the ruling Nepali Congress (NC) in 1999 elections. Likewise, CPN (Maoist Center) had emerged victorious in 2008 elections while CPN-UML won the 2013 Constitution Assembly elections.

The rural municipality has long been affected by floods. However, the locals complained that none of the previously elected parliamentarians have made genuine efforts to address their age-old problem.

“I feel all my previous votes went to waste as none of the people we elected worked for our welfare. This time though, I'll vote for only those who can guarantee that our voices are heard,” added Khatri.

Candidates contesting the upcoming elections have already reached the villages in the district for their election campaigns. When they knock the doors of the flood victims, the victims share their problems with the candidates. This time, the victims said they have high hopes that their pleas would be heard.

Another victim, Anaraj Khatri said, “We do not need arable land. All we need for now is a safe shelter that can remain unaffected by floods in the Rapti River.”

RAUTAHAT, September 7: Last month, Rautahat faced the severest flood encountered in a number of years. Even after so many days,... Read More...

RAUTAHAT, Sept 5: Last month, Rautahat faced the severest flood encountered in a number of years. Even after so many days,... Read More...