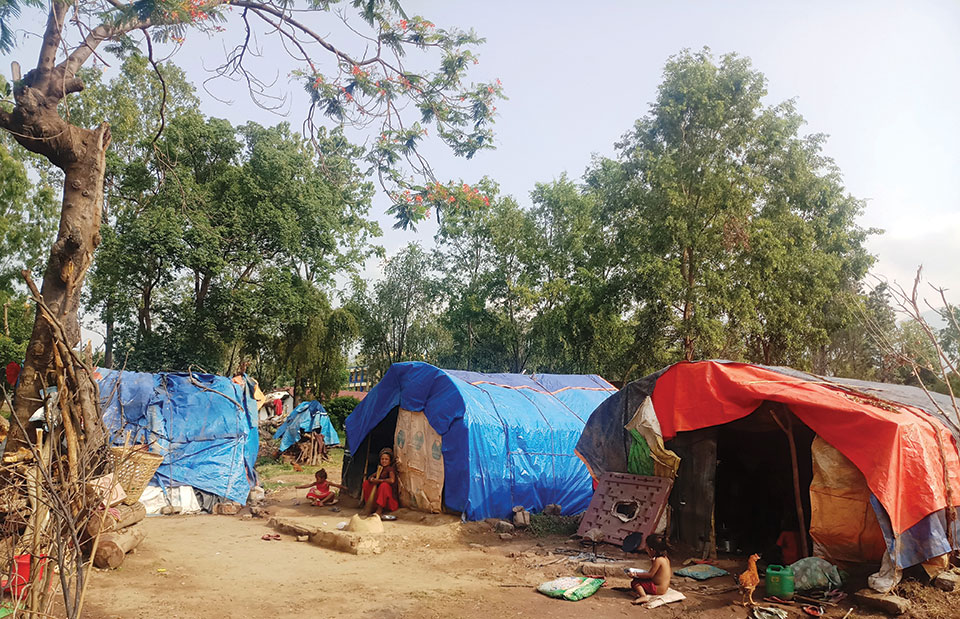 Flood victims living in temporary camps outside a training center in Birendranagar-6.

SURKHET, June 5: Four years ago, Sita Rokka's family of five got displaced by the massive flood originated from the Itram River. In the name of assets, all they had was a house built on 11-dhur land which got swept away. Her husband worked as a laborer to make their ends meet.

After losing their house to the flood, they were compelled to live in the open space of a nearby training center in Birendranagar-6. Two years ago, Sita's husband Nar Bahadur became paralyzed because of which he has not been able to move the left part of his body. As his wound started spreading, he was left with no option but to get both of his legs chopped off as per the doctors' suggestion.

Now, Sita and her elder son are toiling day and night to earn bread for their family. Two years ago, the government had offered the victims with Rs 50,000 which Sita used for her husband's treatment. The tarpaulins provided by the government and various organizations have already worn out. These days, they are having a hard time protecting their tents from heavy wind and rainfall.
Likewise, the flood in the Bheri River washed away the whole family of Sarjan Tamatta of Panchpuri Municipality-10. He was in India in course of employment when his wife, three sons, two daughter-in-laws, a daughter as well as two grandsons were killed by the flood. Since then, he has been sheltering in a tent nearby Galfa forest.

"Blue sky is clearly visible from the tent and I don't know how long will I have to live this way," he wonders.

The situation of Puja Gandrama of Hariharpur-4 is no different. The ravaging flood of August 14, 2014, didn't just wash her home but also killed her husband. After the horrible incident, she has been living in a temporary camp based in Girighat along with her two-year-old son, visually impaired father-in-law and mother-in-law, who is deaf.

It has been four years since the flood victims have been living in 18 different temporary camps of the district expecting help from the government. The deadly flood of August 13 and 14, 2014 displaced 2,329 households and killed 24 people in Surkhet alone.

As many as 91 people were missing in the flood but they too were declared dead by the government. Still, more than one thousand victims are managing their day-to-day life in dilapidated tents.

"We have been living under the open sky since four years. We saw the government change and also the new federal setup but we are still wondering when our miseries will come to an end," said Narendra Khatri, secretary of the Flood Victim Struggle Committee of Girighat.

"It is not possible to make an integrated settlement and hand it over to them in this fiscal year. So, we will have to wait till the next year," said spokesperson as well as minister for land management, agriculture and co-operative of the province, Bimala KC.

KATHMANDU, JULY 29: With various parts of the county severely affected by landslides and flooding, the victims struggle for survival... Read More...