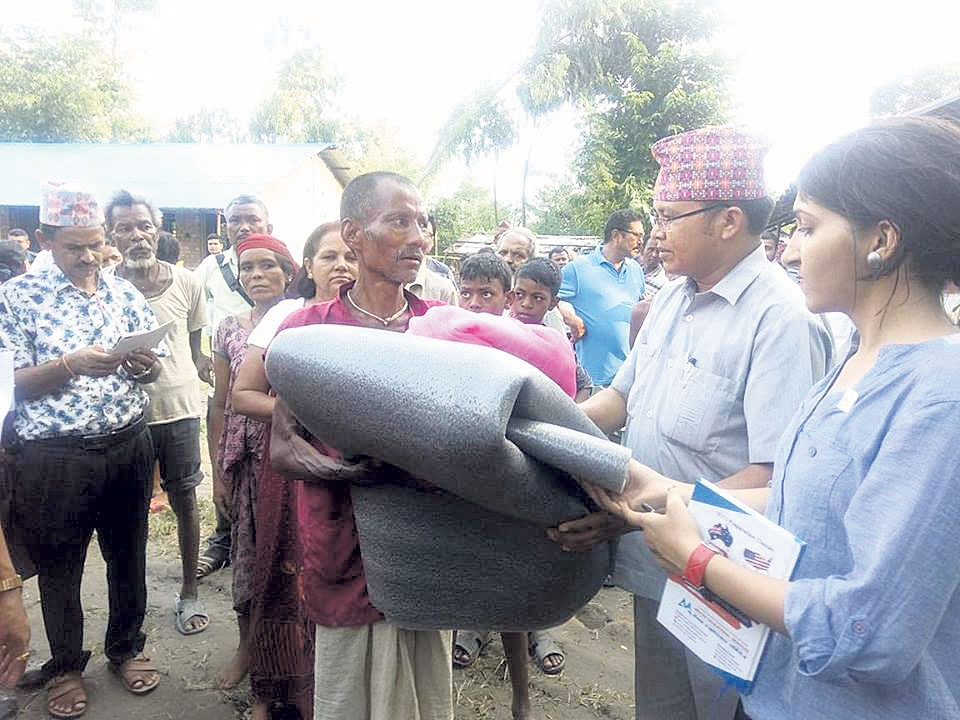 JHAPA, Aug 16: Flood victims in the past would always lament sheer delays in relief distribution and rehabilitation efforts. They would infuriate against the government for neglecting their pathetic situations. On the other hand, the government would feel equally helpless in extending support to them in lack of local representatives. This is the reality, even now, in most of the flood hit areas in Madhes where over 100 have been killed and thousands have been displaced by floods on Saturday. However, the case is different in Jhapa. And they credit local level office bearers for it.

“We had not seen local level representatives for many years. In fact, we had even forgotten how it feels to have them in office,” said Bipatlal Rajbanshi, a food victim from Jhapa Rural Municipality-2. “They have this time made us feel that it’s great when they are around. We are indeed feeling so much safer and cared,” he added.

Rajbhanshi had faced flood menace even last year. In fact, Jhapa is a flood prone district, according to him. “We are affected by floods every monsoon. Only the scale of impact is low or high. And getting food or shelter post flood was almost impossible in previous years,” he said. “But this time, we experienced different thing. Many organizations reached us on time with relief because of the local bodies’ effective coordination,” he added.

According to Rajbhanshi, it would take the government almost a week to provide beaten rice and other snacks. They would have to starve for days. Similarly, Rajbanshi has bitter memories of sleeping in wet clothes for days.

“We would not get anything to eat for five or six days. Even after that, they would come and distribute food unfairly. Some would get twice or thrice while some other would be left out,” he narrated. “Everything would be chaotic.

Poor and innocent would face real hard times during such crisis,” he added.
This time, Rajbanshi was provided snacks within 12 hours of the flood. This was surprising. “They even gave us cloths, blankets. We didn’t have to wear wet clothes for long,” he stated.

He said the receiving the relief on time has saved him and his family members from possible health issues. Last time, he and his neighbors had fallen sick as there was no dry place to sleep or dry clothes to wear for a long time after the floods. “I am seeing that victims are in far better condition now. Look at myself! I had fallen ill last time,” he said.

So far, 13 people have lost life to flood in Jhapa. Around 3000 families have been displaced. The victims report that most of them received relief within two day so the flood.

“I think almost all flood victims have received the relief materials. Most of us have received food that will suffice for at least few more days. Clothes have been provided to all, too,” Rajbanshi maintained.

Another flood victim, Ramesh Rajbanshi has no different view. The local of Birtamod-2 stated that there would be huge problem in relief distribution as senior officials would come to flood affected areas days after devastation. “The chiefs would stay in cities or towns. They would take time to come. Without their presence, relief distribution would not take place,” he explained. “But this time, they were here. As our representatives, they were one of us. So, rescue and relief was instant,” he added.

Ramesh said that local representatives did the needful to make relief distribution and rescue operations effective. “They appeared right after the floods. They called concerned officials without delay. Police, Red Cross, public servants reached here on time. And thus, action was taken as soon as possible,” he stated.

Floods were noticed in Jhapa from Friday though it was Saturday when it swept the areas and incurred severe damages in many parts of Madhesh. Rescue and relief teams were at spots already on Saturday morning, according to Ramesh. “There was flood on Friday. On Saturday morning, everything was being done to relieve the flood victims,” he said.

According to Somnath Karki, who has been involved in the relief and rescue team in the district for many years now, local representatives were on field right after the incident and that was quite remarkable. “They appeared right when the floods started ravaging Jhapa. And every possible thing was done to ease the plights of victims,” he said.

Earlier, the practice was so pathetic that the victims could not be sheltered in school or public property buildings without permission from higher authorities. Such lack of coordination between several bodies would cost dearly to the victims. “There would be empty school building. But, they would say, they need permission from concerned authorities to let the victims stay there. And we would wait for the permission,” he narrated.