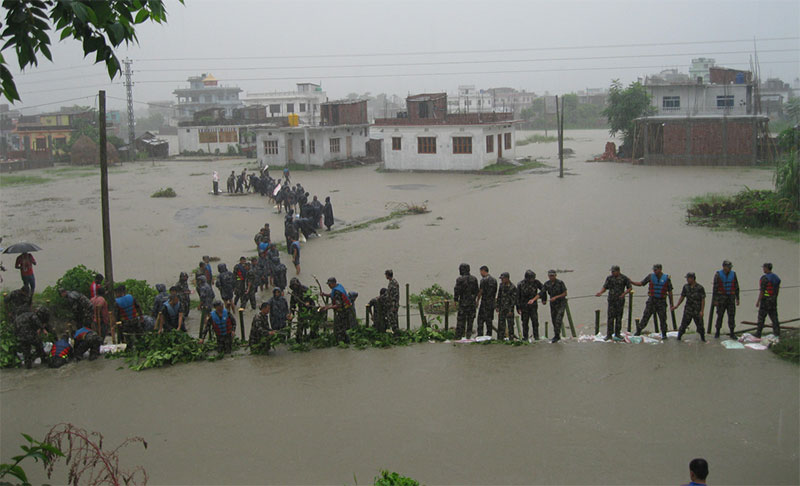 BIRATNAGAR, June22: Floods and landslides triggered by heavy rainfall have hit Morang, Jhapa and Sunsari, inundating more than 300 houses. Landslides in various places of Mahabharat VDC of Dhankuta have obstructed the Koshi Highway.

Swollen Bakraha, Nunshari, Bhokraha rivulets have deluged human settlements in Madhumalla, Hashandaha of Morang, Pakali of Sunsari and Bhadrapur of Jhapa according to Eastern Regional Police Office, Biratnagar. As many as 150 houses of Madhumalla-5 have been inundated by Bhokraha and Nunshari rivulets. Families of 25 houses who are displaced by the flood are being transferred to safe areas.

Over 20 houses in Hashandaha have been badly affected after overflowing Bakraha rivulet broke down a dam. Deputy Sub-superintendent of Police (DSP) Krishna Pangeni has said that Eastern Region Police office has mobilized a squad of security personnel to rescue the flood victims.  Flood in the Mechi River has also inundated over 100 houses based in Bhadrapur Municipality-4 and 5.

Likewise, Landslide in Mahabharat VDC has blocked the Biratnagar-Dhankuta road section of Koshi Highway. Police are trying to clear the blockage according to DSP Pangeni.