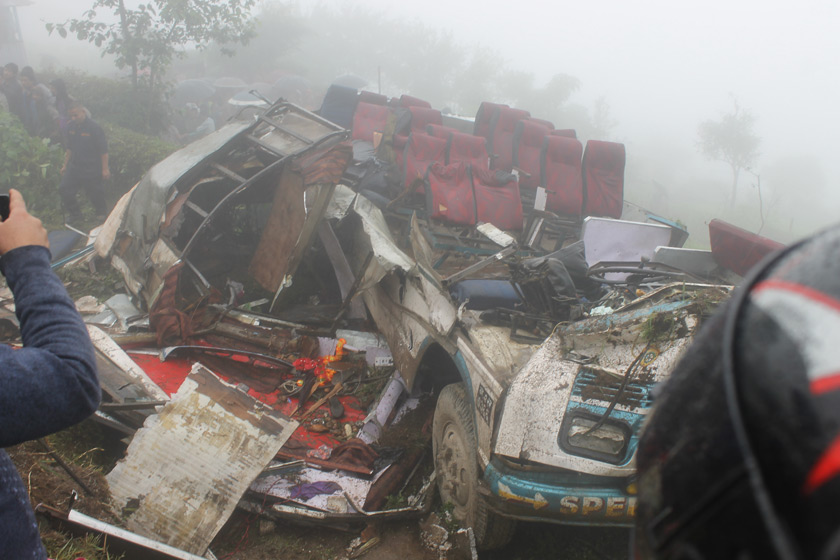 The wreckage of the bus that met with an accident near Sidhuwa Bazar in Dhankuta on Thursday. At least 13 people including former minister of state for finance Hari Raj Khewa died when the bus fell 80 meters from the road. The bus was en route to Dharan f

DHANKUTA, July 28: At least 13 persons, including former Minister of State for Finance Hari Raj Khewa, were killed and 28 others sustained injuries when a passenger bus (Ba 2 Kha 7366) skidded off the road and plunged some 80 meters from the road near Sindhuwa Bazaar of Dhankuta district on Thursday.

The bus, en route to Dharan from Sankhuwasabha, had 41 passengers on board. Brake failure and poor visibility due to fog have been blamed for the accident.

Seven among the deceased died on the spot while the remaining six breathed their last while undergoing treatment at BPKIHS, according to police.

Those who died on the spot include former state minister Khewa of Hatikharka VDC-6 of Dhankuta, Aatimaya Tamang, Khin Maya Bhattarai, Tara Devi Basnet, Tara's three-year-old daughter Reshma, all of whom are from Parewa VDC-7, and businessman Bedprakash Agrawal of Dharan Sub-Metropolitan City ward number 2.

Security personnel and locals had jointly carried out rescue work following the accident.

Locals here are in profound grief following the untimely death of Hari Raj Khewa, a noted politician and former minister of state for finance. His bus met with an accident at Sindhuwa Bazaar while he was returning home after visiting relatives at Marekatahare VDC, Dhankuta.

Known as a very humble leader in the eastern region, people remember him for his modesty and politeness. He was district president of the CPN (Maoist Center), Dhankuta. He maintained a clean image even after becoming a government minister.

Beside politics, he was also involved in literature. He had won the first prize for drama in a Radio Nepal contest and performed a dozen drama roles there. He earned his Bachelor's Degree from Dhankuta Multiple Campus. He is survived by his wife and two daughters.

3 killed, 5 others injured in bus accident

One killed, 12 injured in bus accident

KAWASOTI, July 15: A person was killed and 12 others injured after a bus rammed into a stationary truck at... Read More...