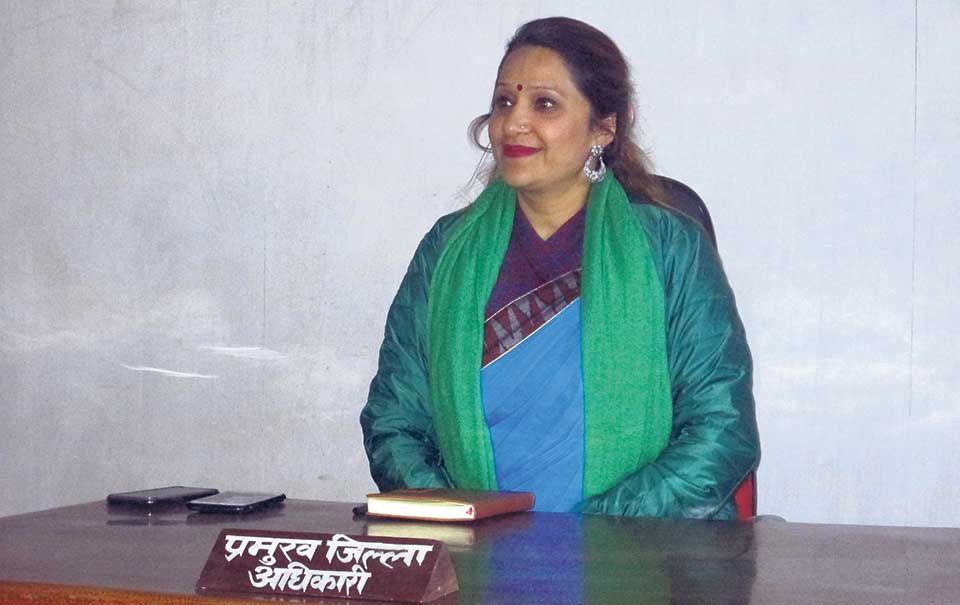 JUMLA, March 1Since 1967, Jumla has welcomed a total of 40 chief district officers (CDOs). However, Durga Banjade has been able to write her name in history for being the first female CDO of the district. On Friday, she assumed her office shortly after landing at the Jumla Airport for the first time.Locals of Jumla are delighted to have their first female CDO.

They expect that this will strengthen the situation of law and order in the district and help maintain loyalty and transparency in government works. CDO Banjade says she will create an environment where all people will show their solidarity to positive campaigns.

"I will utilize all my knowledge and skills to justify my position. I am determined to maintain the quality and transparency in government works," said Banjade. On her first day in office, she held a meeting with the officials of the District Administration Office (DAO), representatives of the security bodies and Karmachari Milan Kendra.

She even interacted with the local journalists and shared her upcoming plans. Speaking at a press conference, Banjade said, "It's you all who will make me successful or unsuccessful. I hope you all will help strengthen the relationship between the service seekers and government authorities."

She urged the journalists to promote and publicize the developmental works and warn those who are doing substandard work in the district. She confessed that she repeatedly urged the government to provide her the opportunity to work in Karnali and especially in Jumla. As she will have to be strict and calm depending on the situations, she requested the people to understand her role.During the conference, journalists expressed their disappointment towards the local representatives for their involvement in illegal activities, excavation of resources, money embezzlement and negligence. "Right now, all we lack is transparency.

If you will maintain that, you will always have our support. We want you to earn the recognition of a successful female CDO," said Karna Bahadur Bhandari, district reporter for Nepal Television.Women rights activist Dilmaya Shahi urged the newly appointed CDO to take initiatives to curb growing child marriage, multiple marriages, Chhaupadi among other ill practices. CDO Banjade assured that there would be zero tolerance against corruption from now onward.

"We will soon a hold a discussion with the chiefs of government offices in the district regarding the government authorities and the delivery of their services," Banjade added.As it was her first visit to Jumla, CDO Banjade was welcomed in a grand way. Earlier, Usha Nepal was appointed as the CDO of Nepalgunj.Caption: Durga Banjade, first female Chief District Officer of Jumla.

TIKAPUR, Nov 2: In order to compete in the upcoming parliamentary elections, both the left and right alliances have fielded women... Read More...

JUMLA, Nov 27: Youths have demonstrated against the ‘negligence’ of the security bodies in the stealing of idols from Chandannath... Read More...