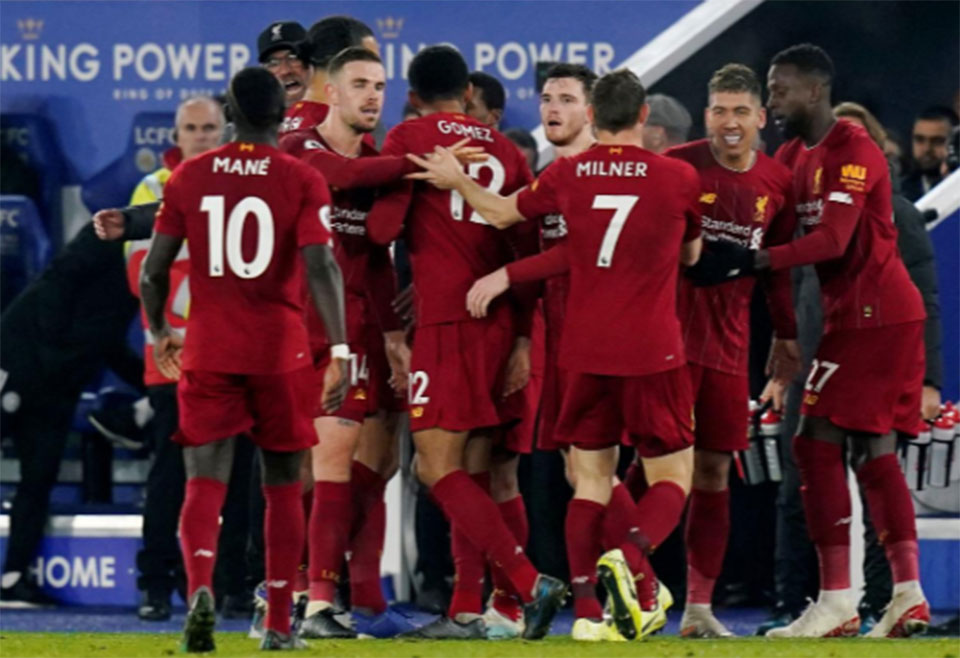 The victory was inspired in large part by attacking right-back Trent Alexander-Arnold who created three goals and scored one himself.

With Firmino deadly in front of goal and Liverpool in total control throughout, it was a performance that suggested the title race is all but over at the half-way stage.

Liverpool manager Juergen Klopp has been vocal in his criticism of his team’s intense schedule but the European champions showed no signs of any adverse influence from their trip to Qatar, where they won the Club World Cup.

A trip to Leicester, who went into the game unbeaten at home this season, was the toughest test of the season, but Klopp’s men passed the test with barely a hint of drama and it will now take an extraordinary slump for them to fail to win their first title of the Premier League era.

“We played really good football after all the travelling and intense period, yes it is the best performance of the season and we controlled it, to get four goals is something to be proud of,” said Alexander-Arnold.

“You don’t really think you will be 13 points clear but we are happy to be in this position and we won’t take it for granted. This is the Premier League and anything can happen,” he added.

Popping up in the inside-left position, Alexander-Arnold floated a pinpoint cross to the backpost for Brazilian Firmino to head Liverpool into the lead in the 31st minute.

Leicester keeper Kasper Schmeichel then produced an outstanding close-range save to foil Sadio Mane and Liverpool would be have been disappointed to go in at halftime with only the solitary goal.

Liverpool were utterly dominant but had to wait until the 71st minute to extend their lead when Alexander-Arnold’s corner struck the left arm of Caglar Soyuncu and substitute James Milner slotted home the penalty with his first touch of the ball.

Firmino then made it 3-0, collecting and firing home a powerfully struck low-cross from Alexander-Arnold before the 21-year-old rounded off the rout, hammering a low shot into the far, bottom corner at the end of a swift counter-attack.

Liverpool have 52 points from 18 games; Leicester are on 39 points from 19 matches and Manchester City are 14 points behind the leaders before their game at Wolves on Sunday.

“It’s one of many successful nights so far this season,” said Milner.

“We are not even halfway. So much can change and happen. The strength of this team is we tale it one game at a time.”

Death of over 1,000 chicken in two days worries farmers
34 minutes ago