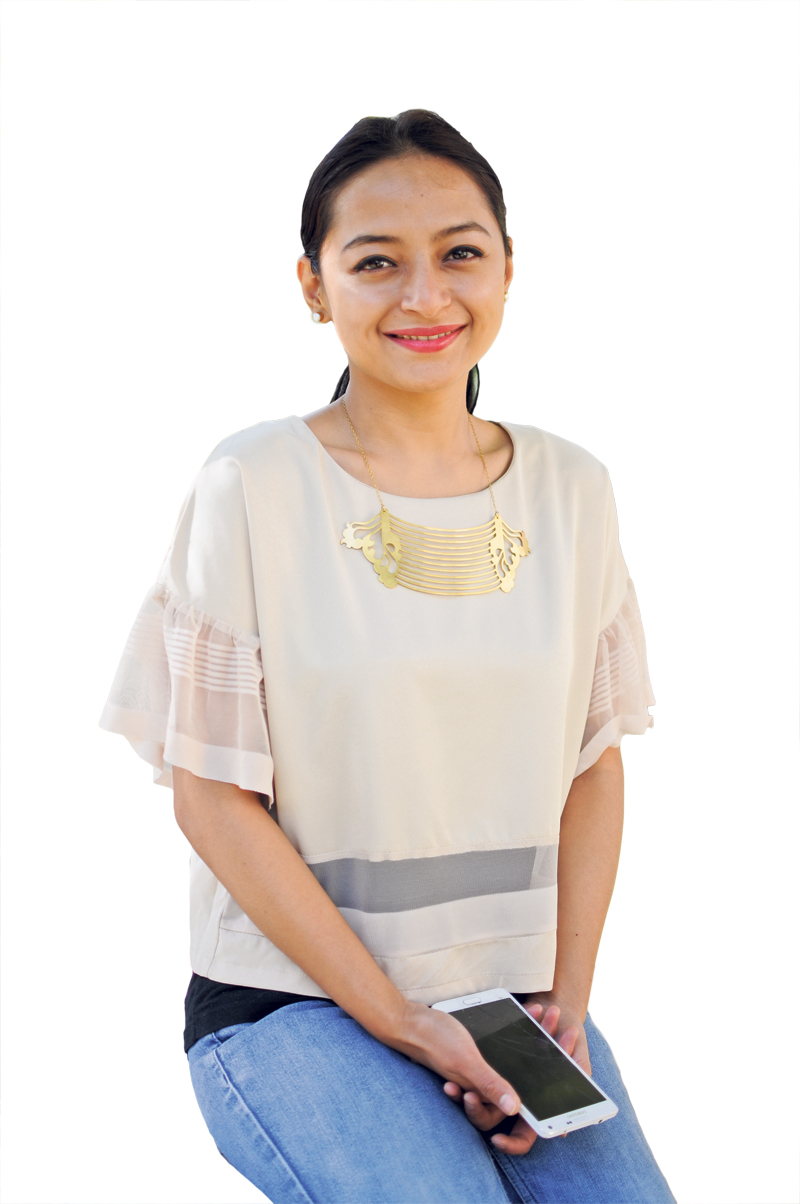 A graduate in BFA Graphic Communication from Kathmandu University (KU), Aayusha Shrestha has been designing gold plated brass jewelry under the brand name AAMO for a little over a year now. And the handcrafted pieces have gained quite the reputation and popularity to boot. Each piece of AAMO jewelry, in its perfect fusion of the traditional and the contemporary, carries a story of Nepal and its history and heritages, which is why they are unique and refreshing.

Here Aayusha Shrestha talks about what goes on behind designing beautiful jewelry, and what it means to her.

I completed my schooling from India and after coming to Nepal, initially I felt really lost and out of place. It was difficult for me to speak in Nepali yet I was always curious to learn. Spellbound by the beautiful architecture of Patan, I began to carry my research and read books through sources that were very limited. Exploring Patan through a tourist perspective, I realized that there was more to Patan than just buildings. I extended my research to include the fascinating jewelry stores in the area, and in the process, switching from sociology to graphics, AAMO was born.

People often miss out the second ‘a’ of Aayusha when spelling my name. Amo in Spanish means ‘I love’. I added the extra ‘A’ to personalize it. AAMO is my love for the skills of the craftsmen of Patan and my passion that reflects from it. I’m really passionate about products made in Nepal. However, while carrying out my research, I found out that the local jewelries were mostly Indian, made for the fashion conscious consumers. Every year, the designs that came into the market were the same. The skill of jewelry making that was passed down in a certain caste of the Newar community was dying. There was this huge market misunderstanding and gap. And that’s where I decided to come in. I made a decision to wear my own jewelry, thus supporting the craftsmen.

My designs carry inspiration from anything. It either comes from reading the news, a situation, personal experience, environment, research, or subjects of interest.

Then, I do extensive research on it and play the design in my head until it’s perfectly modeled. Then, I put it down on paper.

Each piece is important to me because it’s my concept. I don’t want to limit myself as a designer. I want to leave room for growth that way. But right now, my role as a designer is crucial in the work I do. I want to give back by integrating designing and problem solving of issue faced as a designer, adhering to my ethics. A lot of things happen each day and I get affected, for which mostly, I can’t do anything. All I can do and do is come up with something creative.

I would never create something that I can’t wear or relate to. My designs are based on narration and not beauty. The Garima series, for instance, were based on the temples as I saw before the earthquake of 2015. Before the earthquake, I took the temples for granted, planning to go for research later because where would they go, right? Then, the temples collapsed. The Shakti series on Goddesses were inspired from the Delhi rape case that had left me feeling helpless. The Surya Chandra handcuffs depicts that, despite political turmoil, Nepal is at least safer than a lot of places in the world. The Surya Chandra is a reminder of the importance of home for all Nepalis. I created a piece, ‘Namaste’ which has three small chains with prayer flags. Namaste as a greeting is really important to me because these days, people create shortcuts and that way culturally we have lost so much.

After giving them the specification sheet where the precise measurement and details of the pieces are illustrated, I brief the so that the final piece comes out as it is in my head. The pieces are then cut out in the design as illustrated in the specification sheet. Under fire, the brass gives a golden yellow color to which gold plating is done later and other gemstones are also added according to the design. Only a few pieces are made at first so that my relatives and I can wear it for couple of days and note down the lightness and heaviness of the pieces and make alterations accordingly. When I’m satisfied with the final product only then are the pieces packaged for delivery.

People still think that AAMO’s pieces are Chinese laser cut but it’s purely hand crafted. The design is exquisitely complementary to any looks and is of close proximity to the social, cultural and global events and incidence of significance. The Alphabet series that was inspired by the street children of a school at Bungmati and the profits from it were donated to the school. Also in the case of the Rose earrings that was dedicated to her aunt Rose who lost her battle with cancer 10 years ago, 50% of the money from the entire sale was donated to Rose Foundation which with its volunteers spreads cancer awareness with fantastic workshops and programs. This way AAMO is also about sustainable charity as much as good design.

Tinder is a social search service application that needs Facebook to create your profile, and uses location services to facilitate... Read More...