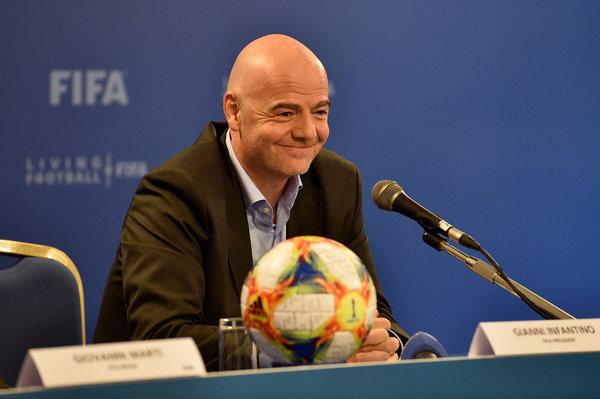 LONDON, March 7: Fifa is pressing ahead with plans to expand the 2022 World Cup despite the concerns of some officials in the host nation, Qatar, whose support the project requires. The move, a politically perilous project but one heavily backed by Fifa's president, Gianni Infantino, would grow soccer's biggest championship to 48 teams ahead of schedule and require navigating some treacherous regional rivalries.

Under the plan being considered, most matches in the 2022 tournament would still be held in Qatar — which won the rights to a 32-team event and continues to prepare for one — but other games would take place in Kuwait and Oman as part of a broader Middle Eastern World Cup. Infantino's expansion would not send games to countries that are leading a political and economic blockade of Qatar, like the United Arab Emirates (UAE).

Infantino, elected Fifa president in 2016 and seeking re-election to a four-year term in June, has been among the biggest proponents of an expanded World Cup that, through increased places for Fifa's member associations and increased sponsorship revenues, could prove popular among countries that rarely get to compete in the tournament.

A final call on the idea was expected to be made next week when Fifa's governing council meets in Miami, but Infantino has decided to move the final decision to Fifa's annual Congress in June, where he is standing unopposed for re-election.

Should Qatar agree to the change — its consent is required — and should logistical challenges be overcome, Infantino would most likely seek the approval of Fifa's 211 member federations, a grouping long known for rubber-stamping policies favoured by the president. He had said previously that the decision would be taken up by the smaller Fifa Council, which governs the sport worldwide.

Fifa and Qatar's World Cup organisers did not comment on the matter.

Privately, though, some senior members of the organising committee who have been working on the event since Qatar controversially secured it a decade ago are opposed to sharing the competition and frustrated that it may yet happen. Qatar's final position on the matter will be defined by its rulers, who may see political advantage in agreeing to include specific neighbors.

While Infantino has suggested that sharing games with Qatar's neighbors would help heal rifts in the region, a Fifa-led group conducting a feasibility study has concluded that it would be impractical to include the blockading countries, which also include Bahrain, in hosting plans, leaving Oman and Kuwait as favoured choices. Infantino recently visited both countries, where he discussed the idea, according to people with knowledge of the talks.

Infantino has pushed an expansion of the World Cup at every opportunity in recent years, despite setbacks along the way. He pulled the issue from the agenda at last year's Fifa Congress amid a backlash from various stakeholders.

But Qatar's posture — it has not publicly rejected an expanded World Cup, even as logistics almost certainly require bringing in partners — has emboldened Infantino to forge ahead to secure the expanded format, which has been adopted for the 2026 World Cup and beyond. Qatar 2022 organisers have said since last summer that they will reserve judgment on a 48-team tournament until a comprehensive study has been carried out.

Infantino has vacillated when asked about the intensity of his push for a 48-team World Cup, veering between sporting justifications that centre on growing interest in the sport and politically hopeful ones that suggest it could ease political tensions in the region.

"There are tensions in this particular region, and it's up to their respective leaders to deal with that, but maybe it's easier to talk about a joint football project than more complicated things," Infantino said in January. "If it can help all the people in the Gulf and all the countries in the world develop football and bring a positive message to the world about football, then you should give it a try."

Kuwait and Oman have remained largely neutral during the Gulf crisis, which has been characterised by bitterness and often petty behaviour between opposing countries. That enmity was laid bare at the recently completed Asian Cup, where Qatar routed host UAE in a final that was played in a poisonous atmosphere and will be remembered for the scores of shoes and other types of footwear that rained down from the bleachers toward Qatar's players as they celebrated goals in a 4-0 victory. With flights blocked between the countries, Qatari players traveled to the tournament via Oman, while its fans were largely barred from attending.

The travel restrictions are also a concern for World Cup organisers who had banked on thousands of supporters travelling to the event from Saudi Arabia and the UAE.

There are several logistical hurdles to clear for an expanded tournament. Fifa officials have ruled that Qatar, smaller in size than Connecticut, won't be able to absorb the additional games, and now must decide if neighboring countries possess infrastructure that meets its exacting demands.

Potential hurdles include a ban on serving alcohol in Kuwait as well as the provision of training venues and airports.

Separately, Fifa will have to work out how to add 16 more games into a schedule that has been reduced to 29 days to appease European soccer leagues left furious by moving the tournament from its traditional June-July calendar to November-December because of the ferocious summer temperatures in the Gulf.

DOHA (Reuters) - Qatar will begin sifting through fan feedback from the Club World Cup to see how it can... Read More...

LYON, July 4: FIFA has denounced “ill-informed and unjustified” criticism of its president, Gianni Infantino, after the coach of the... Read More...

KATHMANDU, June 19: Qatar Airways, an official airline and partner of FIFA, has congratulated Ukraine for winning the FIFA U-20... Read More...