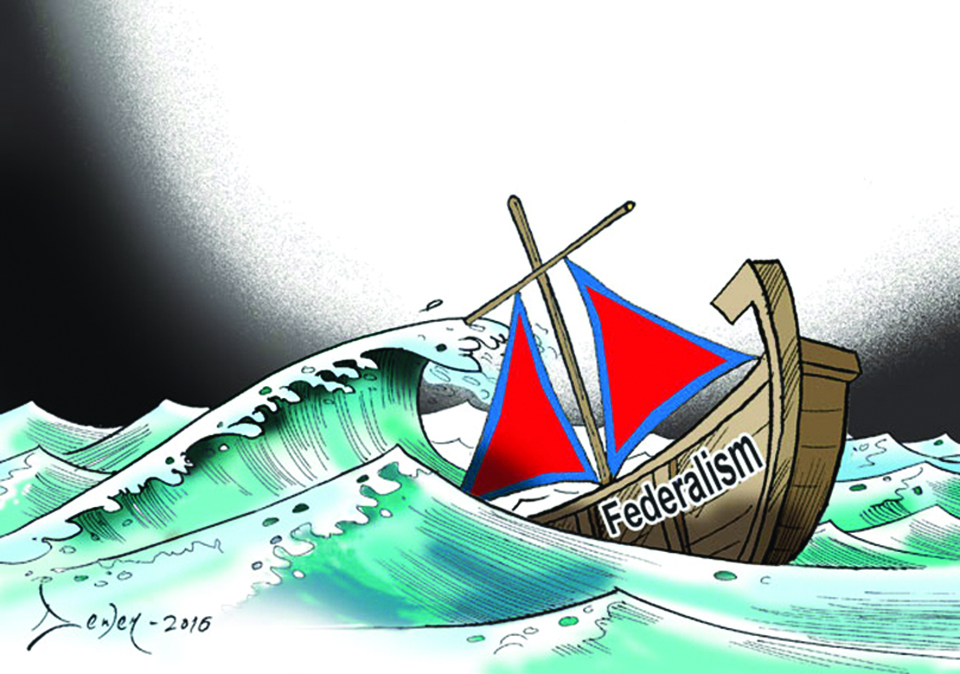 The author is a research professional with Master’s Degree in Rural Development
news@myrepublica.com

Leaders whom we entrusted infant federalism have limited vision or skills as to how they will nurture the new system. They are running the show like they did under constitutional monarchy

While there has been an extensive discussion surrounding the resource constraints and financial implication of the new federal structure as a probable cause for ineffectiveness of the federal and local governments in Nepal, there is yet another reason that might have a far more consequential impact if not given proper thought.

Competent and visionary leadership is always as important as resources for a properly functioning system. This is more crucial if the system in question is at a nascent stage. History has shown us that continuity of a new governance system has always been determined by the skill, astuteness, acumen and most importantly the vision of the individuals who were the first to take the helm. A new system that has weak leadership has almost every time failed or has not been effective. Let’s look at some examples from history.

Two events that shaped the world as we know today took place in the 18th century. First, the thirteen colonies of the North America declared independence from the British Empire. Second, the House of Bourbons which had ruled France for more for 200 years was overthrown. Both the United States of America and France were declared republic. But while one republic thrived under new governance system, the other fell into chaos and about a decade later a good part of Europe was at war as a result of that failure. There might be several factors for these two drastic outcomes. However, one irrefutable reason is the leaders who led the post-revolution government.

The United States had the likes of George Washington, Thomas Jefferson and Alexander Hamilton who with their leadership skills, political acumen, and vision led the new nation through transition toward a stable republic. On the other hand, the post-revolution leaders of France, though knowledgeable, were more concerned in securing individual powers and positions. This political bickering led to the rise of a dictator which put an end to the new republic. The French simply did not have among them a leader who had a vision and the skills to transfer the new republic into a functioning state. Or people with those skills never got a chance.

The history of the South Asia has also seen similar trends. Let’s look at the one most important event that probably decided the fate of the entire sub-continent: Partition of India and Pakistan. In 1946 the British ended their colonial rule in India and as one of the last acts, divided the large empire into India and Pakistan. Overnight two nations emerged from under the British Raj. As of today, India by far has been able to establish a well-functioning democracy whereas the same cannot be said about Pakistan. While there are numerous arguments, writings and reasoning to explain this, one prominent reason is the presence of charismatic and strong leaders like Jawaharlal Nehru and Ballav Bhai Patel leading the Indian Democracy whereas after the passing Mohammad Ali Jinnaha, Pakistan lacked leaders that could steer their democracy to a proper direction.

Coming closer to the present, the recent events are indicative of the same. The post-war Iraq, the post-Gadaffi Libya or post-Mubarak Egypt, all sought to establish a new system of government but either they utterly failed or rolled back to the very system that people sought to change. Again, to a large extent this is due to a lack of leaders who could unite a nation to navigate a treacherous path of institutionalizing a new governance system. The world politics and history are filled with such examples.

A governance system is, more often than not, evaluated on the basis of how the people or persons leading it function. If a leader is visionary and can deliver to the country the benefits of modern development, people do not always crave for democracy. Look at Singapore. Believing that the democracy and federalism can thrive on the sole merit of their conceptual idea is as foolhardy as it can get. In a new governance system this is even more so as every activity of a leader is seen as a direct outcome of the new system. The first decades or so should therefore be dedicated in building the trust among people on the new governance and aligning them into a vision of what the future could look like.

However, Nepali leaders seem to have failed to understand this fundamental requirement. Instead of focusing on institutionalizing new system they are found to be running the show as they did during the constitutional monarchy.

Nepal’s new governance is facing a challenge of inept leadership. While the governance structure has changed, we cannot say the same about the leaders and their mindset. The leaders whom we have entrusted our infant federalism have limited vision or skills as to how they want to nurture the new system. Their leadership style and acumen reflect those of a feudal state and much less an equal democratic state. Elected representatives accepting salutes placed higher on chairs and tables is one example of the orthodox mindset of the leaders. The situation is further exacerbated by the lack of functional knowledge among leaders on how a federal structure functions or on new laws and regulations that come with the system.

While we have decentralized authority, we have failed to decentralize the vision that gave birth to the federalism. The leaders, if we can call them that, are more concerned about securing their power bases rather than securing the achievement acquired at the great cost. There is a high risk of people being increasingly disfranchised with federalism. And if not properly addressed, this disfranchisement could lead to another conflict which Nepal cannot afford.

It is disheartening to think that our federal system could fail just because we lack apt leaders.

A year after its formation, the government of Province 2 has not been able to address the concerns of the... Read More...

First case of coronavirus confirmed in Nepal : MoHP
10 hours ago