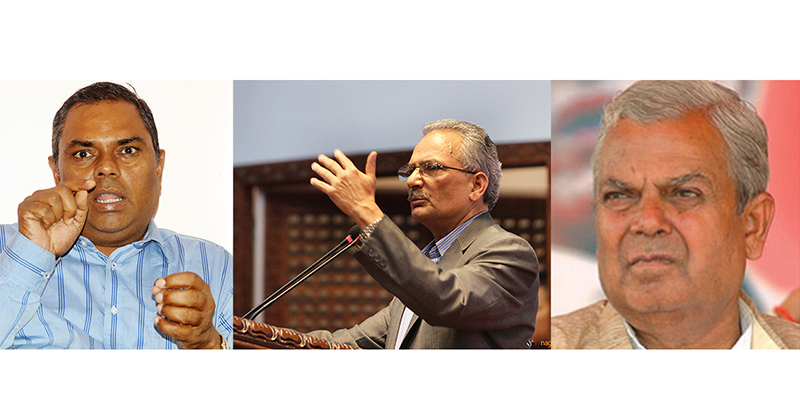 At a meeting held at the Babarmahl-based residence of NSP-N leader Keshav Man Shakya, leaders of FA and NSP have decided to move ahead through the formation of a working alliance.

Leaders said they will formally make their decision public by organizing a press conference on coming Thursday.

In the meeting Tarai Madhes Democratic Party (TMDP) leader Brishesh Chandra Lal asked Bhattrai why he did not resign as a lawmaker before the promulgation of the Constitution.

In response, Bhattara said if he had resigned prior to the promulgation of the Constitution, the Nepali people would not have achieved republic, secularism and federalism, said a source privy to the meeting.

Stating that the existing seven federal provinces will not bail the country out of the current imbroglio, Bhattrai stressed on the need to implement the proposal of a10-province model submitted by the then state restructuring commission.

The meeting also agreed to exert pressure on the Parliament to endorse the constitution bill with amendment in favor of Adivasis Janajatis and Madhesis.

Similarly, Dr Baburam Bhattarai, Devendra Paudel and Karishma Manandhar were present in the meeting from NSP-N.