Farmers let down by sugar mills to return to protests 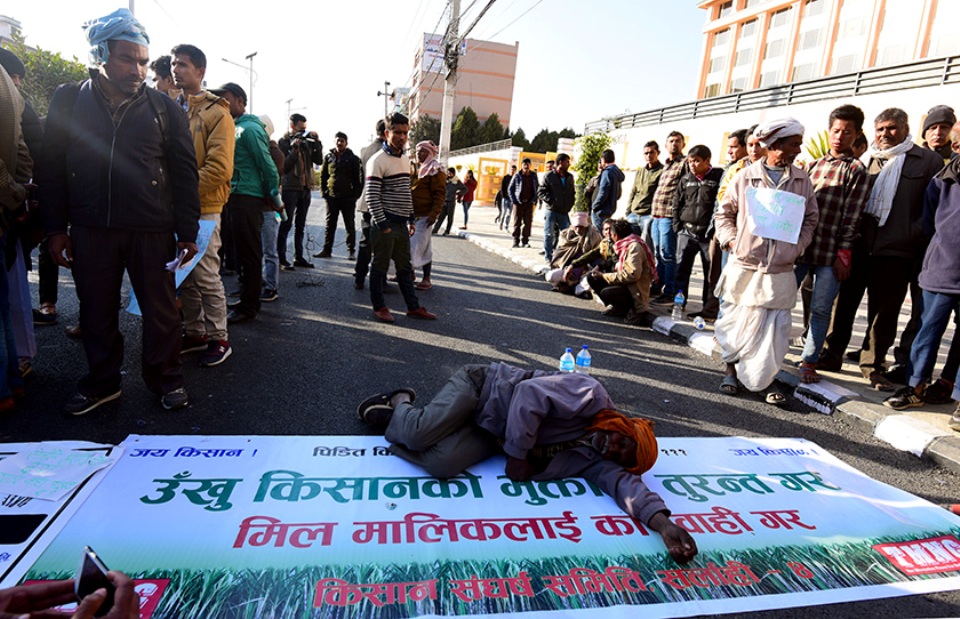 KATHMANDU, Jan 30: Sugarcane farmers have warned that they will start protesting again as they have yet to receive full payment of their dues from both the sugar mills and the government even a week after the agreed deadline.

The farmers said the sugar producers are yet to clear dues to them amounting to some Rs 1 billion. According to them, they have also not received subsidies totaling Rs 1.20 billion from the government.

“Both the sugar mills and the government have deceived the farmers, who depend entirely on the sugarcane they sell to meet their daily needs,” said Rakesh Mishra, a member of the sugarcane farmers’ action committee. He said farmers in Sarlahi district are still owed Rs 560 million by Mahalaxmi Sugar Mill and Annapurna Sugar Mill alone. Similarly, they have not received Rs 280 million in subsidies due from the government.

According to Mishra, Annapurna Sugar Mill has shut its operations ever since the farmers launched the first phase of their protests. He said the farmers are now busy harvesting the new sugarcane crop. “Farmers are compelled to sell to the unscrupulous sugar mills in expectations of receiving past dues also,” Mishra added.

In December, sugarcane farmers from various districts staged a week of protests in Kathmandu. They withdrew the protest on January 3 after the mill owners made a commitment to release the owed payments by January 21. But the mills have paid the farmers only a nominal amount, leaving the farmers in real distress.

According to Mishra, the farmers had to return to their land as the harvest season was starting. “We have scheduled a meeting for Saturday to decide on the modality of new protests,” he said.

Among the sugar mills failing to pay farmers, Shree Ram Sugar Mill had proposed to pay after selling off fixed assets. Annapurna Sugar Mill said it will be able to pay farmers only after it receives payments due from Nepal Electricity Authority (NEA). Sugar mills generate power for the national grid from biomass byproducts. Mahalaxmi Sugar Mill has cleared almost half the amount it owed  farmers and expressed a commitment to clear the remaining dues soon.

Meanwhile, the Ministry of Industry, Commerce and Supplies (MoICS) said it has been in constant touch with the sugar mills to press them to pay the farmers. “The ministry has been coordinating with NEA and the land revenue office concerned to recover dues from Annapurna Sugar Mill and Shree Ram Sugar Mill,” said Dhruba Ghimire, a joint secretary at the ministry.

Ghimire said the ministry has called in Birendra Kanaudiya, proprietor of Mahalaxmi Sugar Mill, for a meeting on Thursday. Mahalaxmi Sugar Mill has paid Rs 25.5 million out of the outstanding amount of Rs 60 million, he further said. MoICS had also been coordinating with the Ministry of Finance to release the subsidies to farmers soon.

NRB flexible on transaction via electronic wallet, while being stern on fee of interbank ATMs uses
15 hours ago
Ruling coalition in Jeopardy
11 hours ago