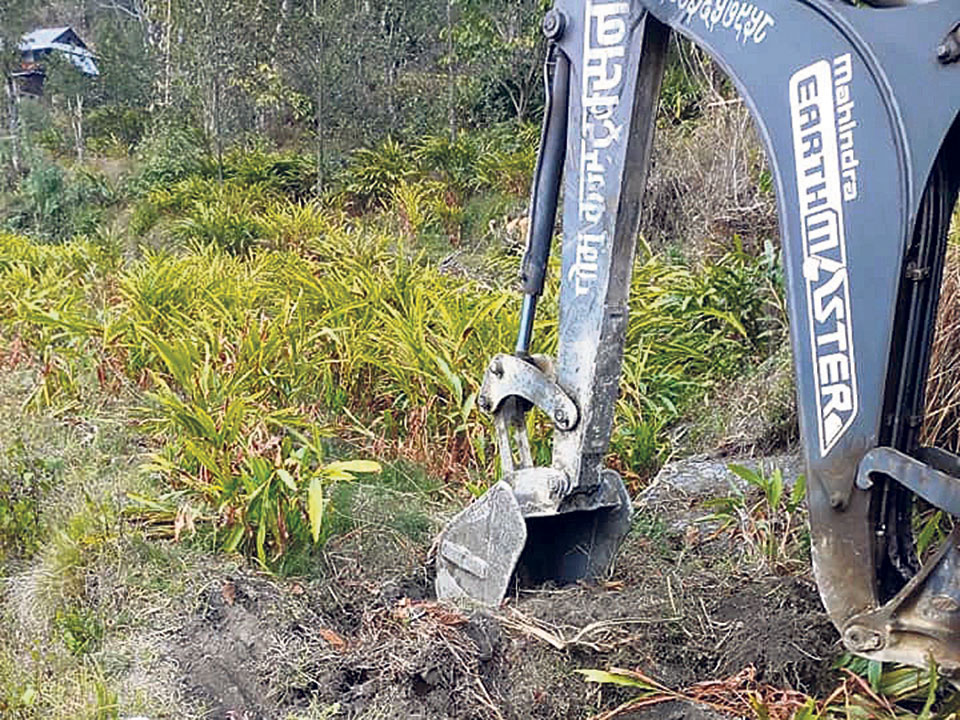 TAPLEJUNG, March 7: A few years ago, when the market price of cardamom was at its high, reaching up to Rs 3,000 per kg, many paddy farmers in eastern hills shifted to growing black cardamom, considering it as a path to prosperity.

Now that the price of cardamom dropped significantly [price in March is Rs 575 per kg], frustrated farmers in Taplejung district have started destroying the plantations using excavators.

Dil Kumar Menyangbo of Phungling Municipality-9 is one such farmer who recently ran excavator on his cardamom fields. He said he was distraught by the falling price of cardamom and took the harsh decision.

“I destroyed the cardamom plantation to use the lands for vegetable farming instead,” said Menyangbo. “Income from cardamom farming wasn’t sufficient even to cover the costs. So I decided to quit and move on.”

Seven years ago, Menyangbo, a paddy farmer, had switched to cardamom farming. He grew cardamom in his five ropani of land. He has already sown vegetables on the field.

Farmers in upper region of Faktanglung Rural Municipality have similar stories to share. As cardamom attracted higher prices each year, these farmers switched to cardamom farming and the production increased drastically.

Until a few years ago, one would see cardamom fields everywhere in the rural municipality. But now with cardamom prices dropping to ‘historic’ lows, the farmers look dejected and have shifted to traditional crops.

Bir Bahadur Bishwakarma of Faktanglung-3 said he fell for the greed of cardamom’s high price, leading him to use 20 ropani of land for cardamom farming. “I sacrificed millet and paddy crops which would feed the family for a year. Now we are suffering.”

Like many others, he has also started running excavator on the cardamom fields. Many farmers have now switched to growing vegetables and paddy. Another local farmer Sancha Bahadur Limbu said they had never imagined that market would crash this badly.

Bal Mani Baral, chairman of Taplejung chapter of Cardamom Farming Association, urged the government to find solution to the cardamom farmers’ plight saying a large number of farmers have been affected.

KATHAMNDU, July 2: Export of woolen carpet, Ready Made Garment (RMG) and cardamom improved in the first 11 months of... Read More...