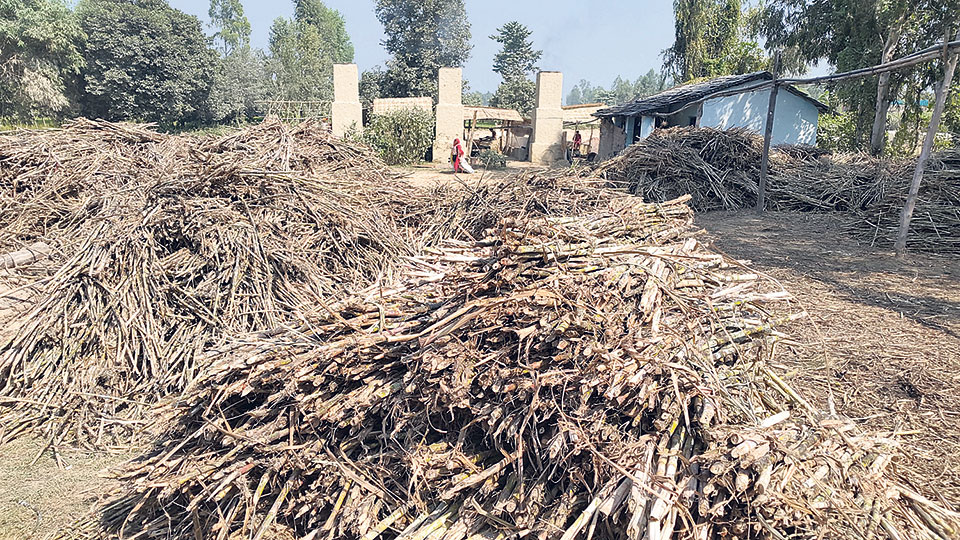 Sugarcane stored in the premises of a crusher factory at Gair in Sarlahi district. Photo: Tanka Chhetri/Republica

SARLAHI, Nov 25: As sugar mills are demanding a revision in sugarcane price to resume operation, farmers are compelled to sell sugarcane to local molasses crushers at very low prices.

Despite several commitments and directives from the government, farmers are still struggling to get payment of their past dues from the sugar mills.

Farmers have said that they have been left with no option than to sell their products to molasses crushers.

"It is better for us to sell sugarcane to the crushers than to let it dry on the field," said Laxman Roy, a farmer. "It is still uncertain when the sugar mills start operation. So we have started selling it to the crushers at half price."

Soon after the Tihar festivals many crusher industries have come into operation to produce molasses refining the sugarcane.

The crusher industries pay only Rs 230 to 240 for a quintal of sugarcane.

Last previous year, the cabinet meeting had taken a decision to provide the farmers a subsidy of Rs 65 per quintal of sugarcane, requiring the sugar mills to pay the farmers Rs 471.28 per quintal.

"There is no point selling sugarcane to the mills if we are not getting our payments even after two years," Roy said. "That is why farmers are selling their sugarcane to crusher industries at half price."

Farmers complain that delay in fixing sugarcane price has ultimately benefited the crusher industries, who are taking advantage of the farmers' situation by randomly fixing price of sugarcane.

"But we can't wait for the mills to resume operation. That is why we are helplessly selling our products to the crushers," Roy added.

Kapil Muni Mainali, president of Nepal Sugarcane Producers Federation, said farmers were worried that their products would get dried on the fields as mills were not operating.

"The government needs to fix sugarcane price immediately based on farmers' costs," Mainali said, "Industrialists are already manipulating the farmers. In such case, the government should act responsibly to protect the farmers.”

There are around 100,000 commercial sugarcane farmers in the country. Nepal produces approximately 20 million quintal of sugarcane annually.

Maha Astami, eighth day of Bada Dashain, being observed across the country today
9 hours ago