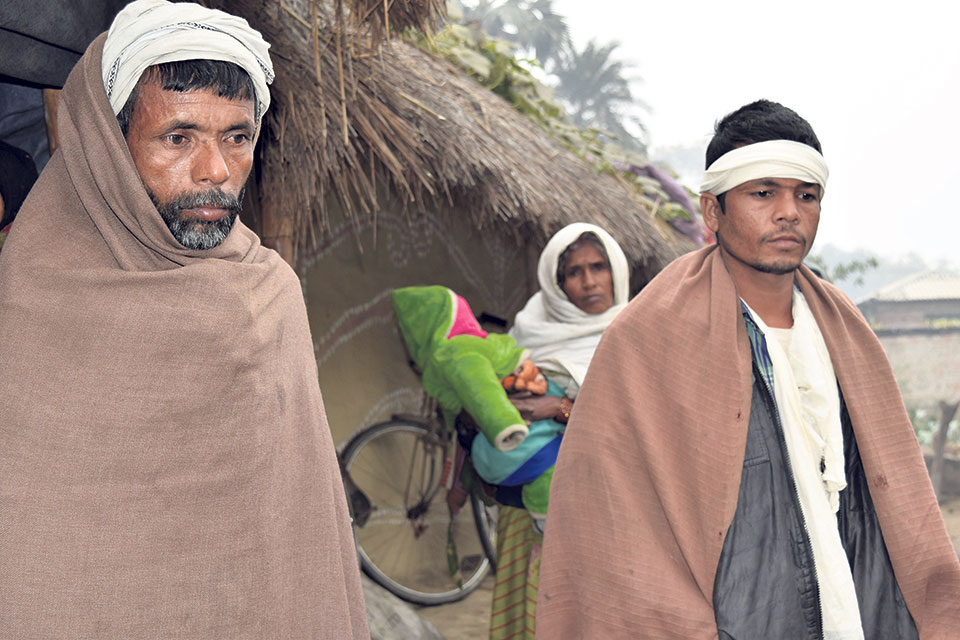 Parmeshwor Paswan (L) of Sitapur, Laxmipur Patari-6, waiting for relief to perform the final rites of his wife.

On Tuesday, his wife Mako Devi slept on the freezing floor of her house by making a bed of hay but she never woke up. As the family won't be able to claim relief without the postmortem of the deceased, Parmeshwor agreed to allow the postmortem of his wife. "I would not have allowed anyone to dissect the body of my wife if I were financially strong," he said. He has somehow managed timber for burning the dead body but is worried how he will arrange money for the feast. The District Administration Office (DAO) is yet to provide relief to the cold victims.

Parmeshwor who is already debt-ridden cant dare to ask the landlords for more loans. "I can't ask for money with anyone because I have not been able to pay my previous loans," laments Parmeshwor. The couple was jointly earning money to pay back the loan.  "We used to pay the interest of the landlord with her earning while my earning was used for buying food," said Parmeshwor.

However, he is not the only one as there are many people who are going through the same situation. There are 68 households of Paswan and 30 households of Musahars in this settlement. All of them share similar problems. They have been living in unregistered land and lack warm clothes. "Winter often brings deaths to our community. I don't know how we will survive this time," said Rajdev Paswan, one of the locals.

Rajeshwor Sah, ward chief of Laxmipur Patari-6, informed Republica that the ward office has submitted a written letter requesting to provide Rs 20,000 each to the victims' families for performing their final rites.

Caption: Parmeshwor Paswan of Sitapur, Laxmipur Patari-6, waiting for relief to perform the final rites of his wife.