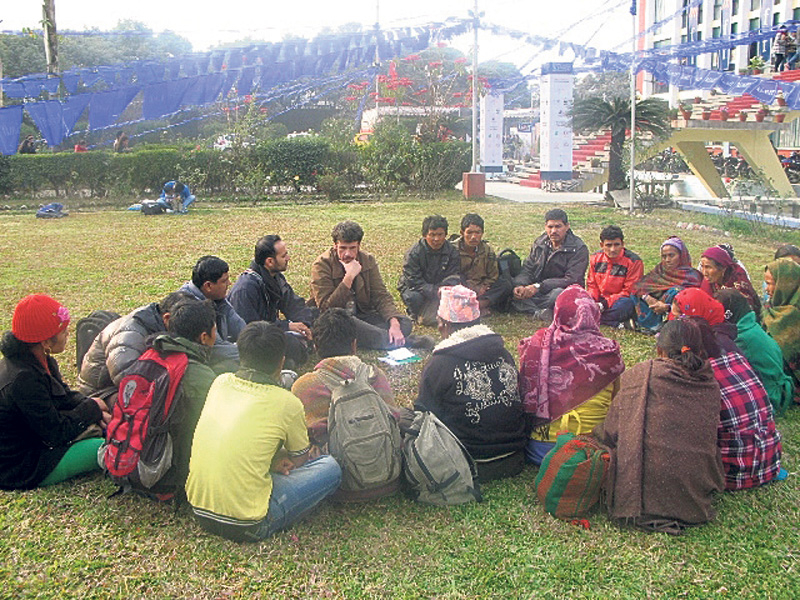 Victims’ family members who had reached Kathmandu to watch the documentary based on the Kotbada incident. Photo: Republica

DHADING, Feb 14: On Saturday, Tara Air successfully conducted a test flight at the airfield at Kotbada in Kalikot district, but the families of 35 laborers who were shot dead there by the Nepal Army during the Maoist insurgency are still waiting for justice.

Fourteen years after the dreadful incident, family members of 17 of the civilians who were killed at the airport and who were from Dhading are desperately waiting to see whether the army personnel involved in killing their loved ones would ever be booked.

Buddhisara Chepang of Hekrang keeps bursting into tears, missing family members and relatives whom she lost  to the armed conflict between the Maoists and the state. “Our family members had gone for the construction of the airport but where are they now?” she asked. That day turned out to be a black day for many who lost sons, husbands and fathers.
It has been more than a decade but the families have not received the bodies of their dead nor have those involved in the massacre been called to account. The whole district turned numb when the 17 laborers from Dhading who had reached Kotbada were shot dead at the airport. Among the deceased, most were from Chepang, Magar, Gurung and Bishwokarma families in Dhading.

The other laborers killed were from Gorkha, Makwanpur and Ramechhap districts. The laborers who had reached there to construct the airfield were killed on Falgun 12, 2058 BS for suspected involvement in the Maoist insurgency. It was later learnt that army personnel had encircled the site and turned it into a killing field.

Just ahead of the Kotbada incident, the Maoists had attacked Mangalsen, headquarters of Accham district, and then fled to a safer place. Army personnel in hot pursuit saw the large number of laborers at the airport and opened fire.

Before they fled, the Maoists had apparently told the laborers not to allow an army helicopter to land at the airport. When army personnel reached there, they mistook the workers for the Maoists. and opened fire without  any reconnoitering.

People around the country protested the Kotbada killings and later a democratic government announced financial  relief of Rs. 1 million to each  family of the victims. But that turned out to be just another promise. The killings left the families facing hard times. They have been constantly accusing the government of adding salt to their wounds through false promises.
ICRC and Nepal Red Cross Society, Dhading has constructed a monument and a waiting room in memory of the labourers from Hekrong who died at Kotbada. They also made a documentary film on the massacre, titled 'Last Journey'.

Caption: Victims' family members who had reached Kathmandu to watch the documentary based on the Kotbada incident.

People from Dhading killed at Kotfbada: