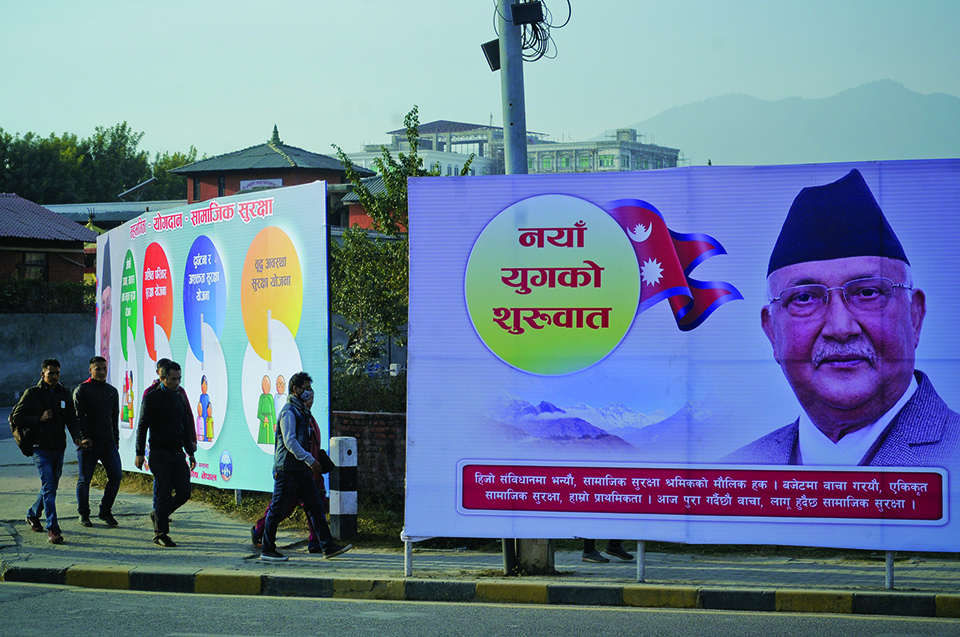 The poster boy of national progress and prosperity is losing his sheen, with his freshly-hung pictures looking down mockingly

Siddhapokhari, Bhaktapur, yours truly is quite sure, is not an unfamiliar place for many of you. But it can be different things for different people, depending on their age, areas of interest and state of mind.

For those with religious-spiritual bent of mind, it is a sacred place. On the day of Ashwin Krishna Dwitiya (a day after Indra Jatra) devotees from different places come here to take holy dips and worship Goddess Indrayani expecting to receive her blessings.

Our scriptures regard water bodies as the abodes of the Nagas (snakes) and people believe that pleasing the Nagas is one sure way to end the spell of drought and get bountiful rain.

In times of drought, people offer puja to Vasuki Nag at this place asking for those precious drops from heavens that bring everything on the Earth to life.

For the young and the growing ones, especially those living in Kathmandu Valley and the surroundings, this pond, also called Ta-Pukhu (Newari) and Indra Daha, is a favorite hangout. At night, Siddhapokhari, with twinkling lights and a rhythmic, cool breeze, offers a sumptuous feast for your senses.

Stretch your imagination a bit further and you may see those divine beings descending to this very place for a romantic rendezvous, a feast, a fest or other merrymaking activities, in those good old days.

Talking to local people or turning on the pages of history, you may find that this pond is a storehouse of many myths. Let yours truly share with you one such myth with an acute realization that he may have forgotten some of the details that would have made it more interesting. (Learned scholars, please correct me if I have misinterpreted some of the details, for lack of deep knowledge of the subject, of course.)

Long long ago (stretch your imagination a bit), a demon used to live in this pond. This demon, like many of its kin living comfortably in our ancient books these days, was a ferocious being, a source of fear and terror in the locality. Presently, yours truly does not have the details of terror it unleashed upon local communities back then, but one thing was clear: Its reign of terror was becoming unbearable.

Such situations, according to stories new and old, demand the rise of superheroes. In the figment of imagination of writers, knights, often in shining armor and astride white horses, enter the scene during such emergencies, exterminate the evil and establish the reign of dharma on Earth.

As per this myth, which seems to have no evidence of Mother Earth, unable to withstand the sins of the demon, shaking violently and pleading for divine intervention from Lord Vishnu and the latter renewing his pledge to re-establish the reign of dharma by taking a new avatar, a powerful Tantrik decides to exterminate the evil and provide respite to the hapless locals.

So, on a designated day, the Tantrik goes to the pond along with a priest (Were the curious kings and nobles as well as divine and semi-divine beings of those times accompanying the Tantrik to the pond that day or were they too terror-stricken? Yours truly has no idea).

The Tantrik tells the priest: I will take the form of a demon to kill the evil living inside. Once I have finished off the resident evil, you shower on me the sacred Askhyata by chanting mantra so as to bring me back to my original form.

Some people believe that the evil lives inside the pond to date.

You may be wondering as to why yours truly is spinning the ancient yarn, that too so boringly. Let me tell you why by clarifying, first and foremost, that the myth is not boring at all. If the storytelling style of yours truly has got you disinterested, then I need to develop my storytelling skills further and further, taking clues from granny’s tales.

But for now, bear with me and let me continue by saying that this myth is quite relevant. Let me tell you why.

Our contemporary struggle against unjust and undemocratic rulers dates back to around seven decades. Before that, though empty-bellied and ill-equipped oftentimes, we were fighting foreign forces that were inimical to our country and her interests.

Since that time, leaders of different hues and colors have rallied us into struggles against injustice. After winning in struggles against homegrown tyrants, these leaders have themselves emerged as new tyrants using the new system to their advantage, at the expense of the people and the country. Our history is testimony to the fact that those fighting the Rana regime became more or less like Rana rulers, while arch foes of Shah Kings appear no less royal.

Giving continuity to this sad state of affairs, a political force that had stood against the inhuman blockade, a force that had stood against lampasarvaad, a force that had pledged to push Nepal towards an era of unprecedented progress and prosperity, is fast losing its credibility, not long after winning elections with a two-thirds majority in the Parliament. A government that had pledged to stand against unregulated non-government organizations is looking increasingly like a non-government organization itself by appearing increasingly like a co-organizer of a summit organized under the aegis of some NGOs, principal among which has been mired in controversies.

Amid all this, the poster boy of national progress and prosperity is losing his sheen, with his freshly-hung pictures looking down mockingly at the sorry picture.

The priest could easily have brought the Tantrik-turned-demon to his original form by reciting some mantra and showering Akshyata on him, but how do you bring a two-thirds majority government, which appears unsinkable like the Titanic, back on track?

No country for new leaders