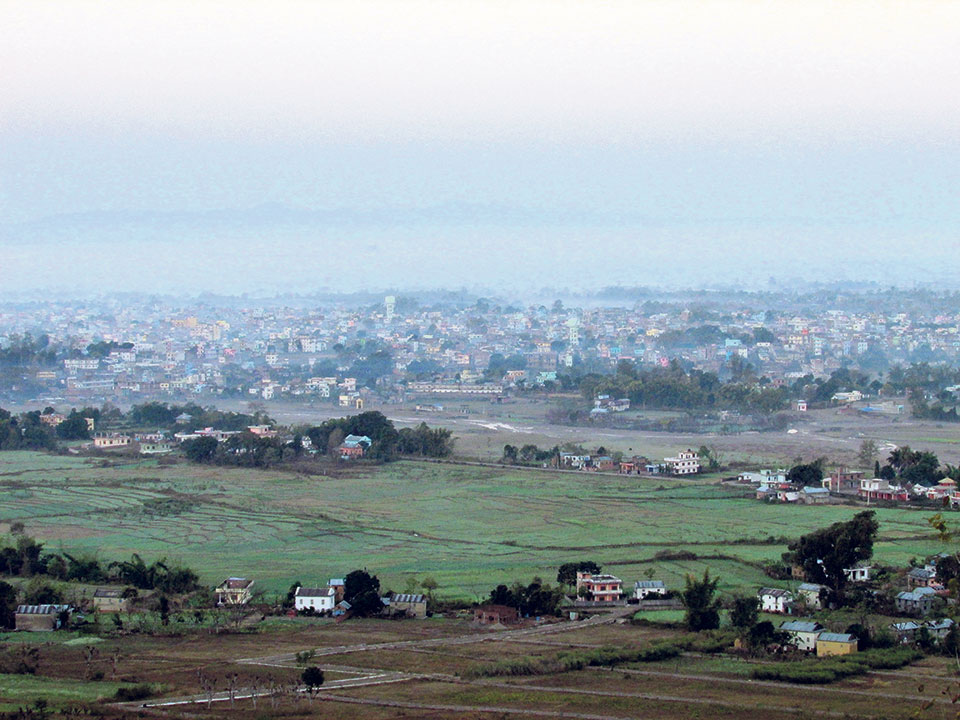 A recent picture of Ghorahi of Dang. Photo: Kuldeep Neupane

DANG, May 23: ‘Smart city’ was a buzzword during the local level elections a year ago. Political parties and candidates told voters that they would leave no stone unturned to turn their constituencies into smart cities. That means, people who were struggling for even basic services would have access to luxuries of life in their own localities. Locals of Dang were promised so by their leaders.

One year down the line, the dream of smart city seems to have faded. Neither the leaders are aware of their tall promises, nor do the parties show interest in tracking development works. The agenda continues to bother only the commoners.

“We voters are unaware about what they are doing. Our leaders and political parties were so much eager to change our towns into smart cities then. Now, after the elections are over, nobody is talking about it,” noted Poshan Shrestha, a local of Gorahi.

“We, as locals, cannot take that level of initiative. We had dreamt of it anyway,” he added.

Smart city was the agenda of all the parties contesting the elections. At least Ghorahi, a major hub, needed to show some signs of change, according to the locals. “However, neither Ghorahi nor Tulasipur are any better in this regard,” Shrestha said.

During the election campaigns, the voters skeptical about the tall promises made by the parties in their election manifestos. But the candidates made them believe that they would fulfill their promises. In a few weeks, locals of Dang started to dream that their localities would turn into very well managed settlements. However, to their great disappointed, nothing such has been done so far.

“We are facing hardships here. Our worst problem is the pathetic condition of the roads. Life has become a hell due to the dust, potholes and mud,” said Shrestha.

Ghorahi and Tulasipur are two sub metropolitan cities of Dang. It has been years since the construction of four-lane roads started here. But let alone blacktopping of the roads, even the widening process has not been completed. Similarly, the market places of Ghorahi and Tulasipur are equally in mess. Poor condition of stalls, roads, bus parks, drainages speaks volumes about the utter mismanagement.

“We thought that few things would change as soon as the local body comes into existence. However, they blame each other for the delay. They should not have promised in the first hand if they were not going to deliver,” Shrestha stated.

According to Chitara Bahadur Oli, chairperson of ward number 11 of Tulasipur metropolis, the agenda of smart city was only an election agenda. No one was actually serious about it.

“That was just to hoodwink the voters. Everyone was talking about smart city then,” he said.

Oli stated that the agenda indeed helped some candidates win the election. Whoever could sell the dream drew more votes, according to him.

“But the same spirit is now not reflected. We do not see that kind of attitude among mayors or other office bearers of the metropolis,” Oli said.

Mayor’s overseas visit to get idea about smart cities

In the name of turning towns of Dang into smart cities, and getting idea about it, Mayor of Tusalipur Metropolis Ghanashyam Pandey has already visited several cities overseas. However, locals are not impressed with this. According to them, the mayor’s priority was only to enjoy the trips. Even staff at the office of the metropolis are not happy about the visits.

“The mayor went to China and elsewhere to gather knowledge about smart city. But nothing such has been implemented here,” said a staff requesting anonymity. “We have seen no difference as all,” he added.

Meanwhile, Shrestha stated that local representatives are more centered on reaping benefits for their own personal good rather than for the benefit of all.

“Just by visiting others’ countries you cannot develop your own city. You have to be genuine and understand your own ground reality first,” he stated.

He further said that the agenda of smart city is no more a priority of mayor of Ghorahi. Only during the election time, Narulal Chaudhari, the current mayor of the metropolis, had touted about it.

“Now, he does not even talk about it,” Shrestha reported. “So, that means, you can say anything during the election time and just forget about it post election,” he fumed.

Chaudhari, however, defended himself by saying that all basic facilities are almost already there in Ghorahi. “We are trying to make things better. We are doing our best. Smart city does not mean entirely a different scenario,” he said.