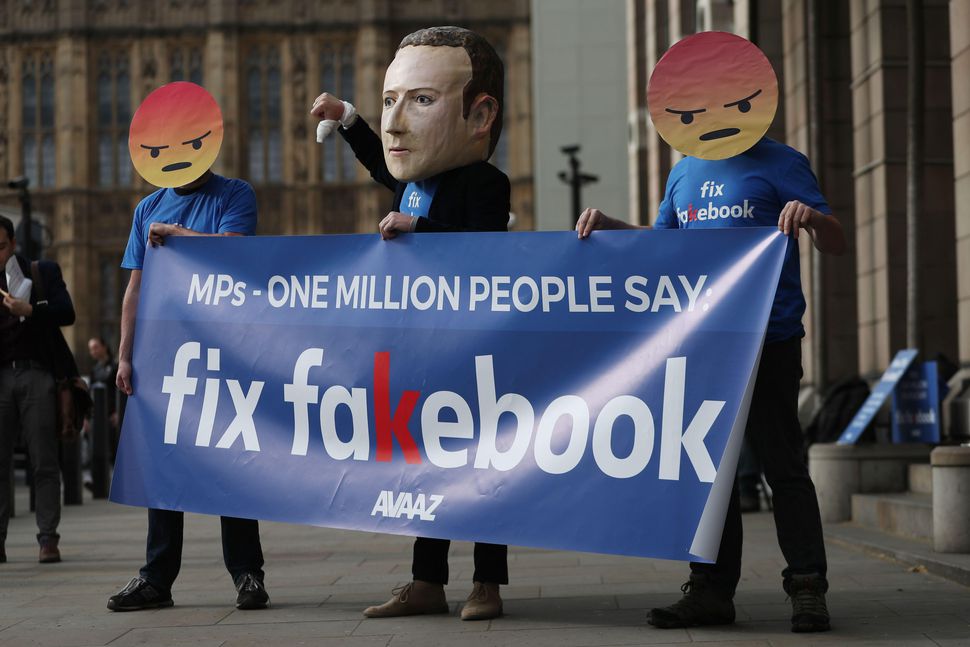 Has the rise of fake news plunged democracy into crisis? Some UK politicians believe it has.

The report paints a picture in which people's data is being manipulated and voters are being targeted without their knowledge via disinformation and hate campaigns on social media that are designed to skew the results of elections and referenda.

In particular, the report calls out Facebook for its contribution to the spread of fake news and centres its recommendations around getting social media companies to take greater responsibility for "misleading and harmful content" on their sites.

The publication of the interim report by Parliament's Digital, Culture Media and Sport (DCMS) Committee is the result of a yearlong inquiry into fake news. It will be followed by a more in-depth report in the fall.

"We are facing nothing less than a crisis in our democracy," Committee Chair and Member of Parliament Damian Collins said in a statement. He described how the inquiry that he's led for the last 12 months has "pulled back the curtain on the secretive world of the tech giants, which have acted irresponsibly with the vast quantities of data they collect from their users."

Last summer, when the DCMS committee launched the inquiry into fake news, it expected the investigation to last around six months. But the more evidence and witnesses the inquiry absorbed, the more questions and issues came to light, particularly when the Cambridge Analytica data scandal broke this past March.

The investigators questioned key figures from Facebook and from Cambridge Analytica and other data firms that were drawn into the scandal. It worked closely with whistle-blowers and journalists to help bring to light the fact that Vote Leave, the official leave campaign during the 2016 EU referendum, exceeded its spending limit. It helped uncover evidence suggesting Russian state-sponsored interference in the referendum. And even though the inquiry has now officially concluded, Collins said it feels like more information may come to light.

"I believe what we have discovered so far is the tip of the iceberg," Collins said.

The names of a number of major tech platforms appear in the report, but while Twitter is mentioned 23 times, Google 13 times and YouTube five times, there's one particular company that draws the majority of the committee's scrutiny. The word Facebook appears in 236 instances in the document, giving a clear indication of the platform lying at the heart of much of the committee's inquiry.

Facebook is where many micro-targeted advertising campaigns around elections have been found to take place, where bots and fake accounts are prolific and where fake news has been discovered to run rampant. One of the committee's main aims during the inquiry was to understand the minute details around the mechanisms and policies that allowed users and their personal data to be exploited by campaigns without the users' knowledge or consent.

On multiple occasions Collins asked Facebook CEO Mark Zuckerberg to give evidence to the committee in person or over video link, but Zuckerberg has consistently declined the offer. Instead he sent various executives, including Facebook CTO Mike Schroepfer, in his place.

"I can't believe there are things of importance Mark Zuckerberg doesn't know," Collins told CNET in an interview in May.

The committee reiterates Collins' sentiment within the report, and it doesn't attempt to hide its frustration with Facebook.

"What we found, time and again, during the course of our inquiry, was the failure ... of Facebook and other tech companies to provide us with the information that we sought," the report says. "Facebook was reluctant to share information with the Committee, which does not bode well for future transparency."

In a statement Sunday, Facebook said the DCMS committee raises important issues, that the company agrees political advertising should be fair and transparent, and that Facebook will work closely with the British government to develop transparency tools.

"We have already made all advertising on Facebook more transparent. We provide more information on the Facebook Page behind any ad and all the ads that Page is running, even if they are not targeted at you," Richard Allan, vice president of policy at Facebook, said in the statement. "We are working on ways to authenticate and label political ads in the UK and create an archive of those ads that anyone can search."

For a long time, Facebook has insisted it's a platform rather than a publisher, but the DCMS committee disagrees, saying such an interpretation lets the company abdicate all responsibility for policing content while profiting from whatever content most engages users, regardless of what it might be.

One of the recommendations the committee puts forward in the report is for the government to create a new class of tech company that's neither simply a platform nor publisher, with a different set of rules to govern such businesses. This would force tech companies to be more transparent, and in certain instances would mean they'd be held liable for content posted on their platforms.

"Just as the finances of companies are audited and scrutinised, the same type of auditing and scrutinising should be carried out on the nonfinancial aspects of technology companies, including their security mechanisms and algorithms, to ensure they are operating responsibly," the report says.

The committee also suggests that the Information Commissioner's Office, the UK's data protection watchdog, should have expanded powers to scrutinize tech companies and should be assisted in hiring staff with more technical expertise to perform these duties. Tech companies should pay a levy to fund this, the report says.

The report further recommends that the Competition and Markets Authority should consider conducting an audit of the operation of the advertising market on social media, in particular to crack down on the use of fake accounts.

The government should think, too, about establishing a Digital Atlantic Charter in conjunction with the US, the report says. This would reassure users that their digital rights are guaranteed, by establishing what they can expect in terms of liability and protections.

"This is a watershed moment in terms of people realising they themselves are the product, not just the user of a free service," Collins said. "Their rights over their data must be protected."