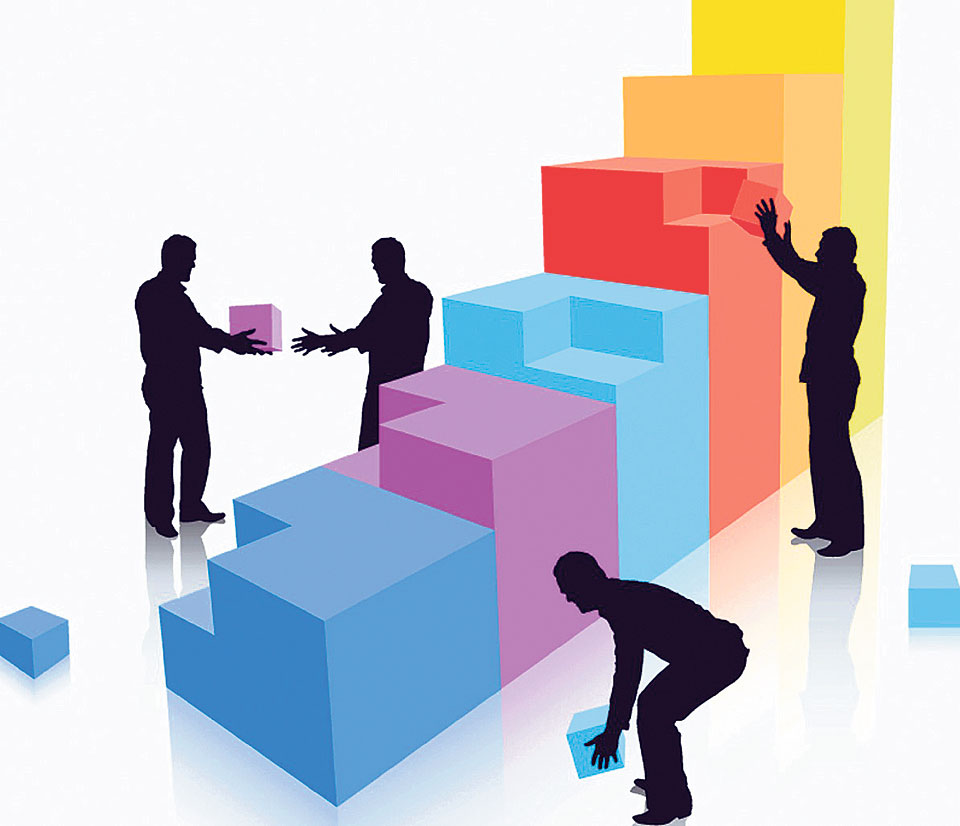 Removing foreign investment related barriers in small and medium enterprises should be immediate priority. This will attract private investors and open new avenues of investment

A follow-up interaction session between National Planning Commission (NPC), attended by a senior member of the commission, and Nepal Policy Institute (NPI) was held in Bangkok on May 29 this year. During the session, NPI recalled priority issues which were proposed as development planning goals in areas of (1) food security, for Nepal’s imports of basic food items have not abated (2) lifting restrictions on foreign direct investment and (3) inducting economic diplomacy as top foreign policy instrument.

Priority should be increased production of basic food items because Nepal is faced with deficiency in domestic production. Shortages heighten economic vulnerability. We rely on large imports from India to meet local demand. Clearly, shortfall in indigenous staple commodities is a serious sovereign concern.

Nepal is confronted with challenges in attracting private investments in agriculture and it hampers rural employment. Sustainable investment in small and medium enterprises (SMEs) is the pragmatic way forward because it generates local employment and provides stable economic support. Foreign investment in (SMEs) does not preclude domestic enterprises. Instead, it nurtures competition, and smart entrepreneurs will create and innovate development possibilities contributing to increased production, quality product and lower consumer pricing. However, support to vulnerable local community will be essential for long-term sustainability.

Creativity and innovation
Presently, global economic environment is under a trough due to shrinking market and protectionist environment in industrialized countries because of income disparity, trade disputes between the US and China and others, and technology war between the economic superpowers.

The trade protectionism surge can be attributed to (a) widening income gaps between those who “have” benefitted from liberalized economies and those who “have not” (b) growth stagnation in Western Hemisphere (c) market shift to the East with falling demand in developed countries (d) innovative application of game-changer algorithm, and (d) anxieties and disruptions anticipated from advancing artificial intelligence.

These challenges will impact industries, manufacturing, production, employment, farming, human behavior, education, socio-political values and human security to say the least. Significantly, likely Supply Chain disruptions and faltering development philosophies, and quest for adaptive knowledge will be more challenging than we could foresee now. This will be felt by emerging economies and far beyond Asia. But every challenge comes with new opportunities provided it is recognized timely and responded with creativity and innovation.

Observers wonder whether government of Nepal intends to capitalize on opportunities. Some countries in Asia are either preparing for it or marching toward this. Nepal can catch up if it abolishes, forthwith, all restrictive foreign private investment barriers and embarks on making Nepal the most attractive foreign investment destination in the world. Nepal should follow global trends, join economic mainstream, forge economic alliance with economic powerhouses, create sound industrial base maximizing on comparative advantages and Supply Chain while simultaneously accessing larger markets.

Why would a smart entrepreneur come to invest in protectionist Nepal? Nepal is not on radar screen of big investors because of investment thresholds and restrictive measures. Should not we reexamine pragmatically economic strategies and investment principles based on realism? In this, economic diplomacy can play a good part in foreign policy. However, economic diplomacy focus should be realistic and timely, capable of alluring private investors in doing business with ease and in secure work environment.

Standard of living
Government can recalibrate policy strategies coherently drawing on relevant experiences from other countries, especially China. Nepal is, unfortunately, one of the poorest countries because it has become incapable of eradicating poverty although poverty alleviation program is running for decades. Poverty alleviation program suffers from poor management of funds, overlapping, duplication and lacks focus on sustainability because of faulty planning, implementation and monitoring, and lack of accountability. It has failed to ensure universal access to health care, clean water, schooling (beyond functional illiteracy), decent income, minimum nutrition, clothing, shelter and security which define standard of living.

Successive governments have been advocating Nepal’s graduation from Least Developed Countries (LDC) category to Middle-Level Income Countries by 2021 and attain Sustainable Development Goals by 2030. This requires raising either per-capita income to US$ 2,460 from the current estimate of US$ 1,007 or maintaining steady progress as per set thresholds with no less than minimum of 66 percent on Human Development Index and 32 percent on Economic Vulnerability Index.

Nepal suffers from positive perceptions in doing business due to corruption, lack of industrial base, infrastructures, connectivity, security, market and availability of efficient labor force. State institutions generally fail to cope with new challenges. Protectionist statutes in books do not inspire foreign private investors and entrepreneurs. Given this, Nepal is unlikely to achieve US$ 2,460 per capita income target for entry into the next category during the 2021 triennial review or able to sustain minimum threshold progress achieved on Human Development and Economic Vulnerability indices.

Development observers wonder how Nepal expects to move up to entry level of the next category without achieving sustainable development. If promoted, it will forfeit all favorable treatments accorded to LDCs in securing investments, loans, credit in conversational terms and access to trading and market facilities. This can only be a self-inflicting venture in nation’s economic development history.

Per capita income of US$ 1.90 per day (calculated at 2011 prices) is not adequate for a minimum standard of living. The moot question is what specific and productive activities are contemplated to raise income to reach US$ 3.20 per person per day required for entry and sustain at Lower Middle-Income Countries level in the upcoming development planning cycle?

Without manufacturing and heavy industries mere emphasis on annualized projected growth based on unstable services sector and mercurial agriculture will not ensure sustainability at the next level. Primary challenge is to bridge income disparity by raising real income of citizens and maintaining it, beyond cash subsidy by state, for those who live at lower economic margins. Economic gains, otherwise, will remain trapped and plans will keep spinning around the confines of middle class that dominates Nepal’s economic landscape, and socio-economic disparity will continue to widen further.

Lessons must be learned from the experiences of Brazil, Argentina, South Africa, the Philippines and India where economy is trapped within the spread of middle-income group. This phenomenon, without social compact, widens income disparity and exclusion of majority will contribute to rise in political populism—disguised in nationalism.

Environmental concern
Kathmandu Valley has notoriously become one of the most polluted cities in the world and speedily melting of Himalayan glacier will not spare us from unforeseen disasters. We must urgently explore options and find a permanent solution to mitigate this.

National capital city faces serious health hazards due to air pollution (reportedly kills some 35,000 persons annually), depleting water supply, industrial poisoning and soil erosion. Research reports indicate Kathmandu Valley, which lies on alluvial soil structure and Himalayan fault lines, is susceptible to extreme propensity earthquakes. This is no time for complacency if we are to avert likely annihilation of treasured civilization and architectural marvels of the valley.

Policy makers should contemplate relocation of capital city. National Planning Commission can study options for reasons of earthquake vulnerability, congestion, health hazards, water shortage, growing population, over-crowding and technical impediments in redesigning infrastructures, and, more importantly, for better quality of life and safety. It can undertake feasibility to separate political capital city with administrative hub and others or plan a new city; away from unsafe valley and promote valley’s national heritage and religious sites as prime tourist destination.

Cities around the world are redesigned and relocated to new locations for multiple reasons. Recently, Indonesian government decided to relocate waterlogged and flood prone capital Jakarta to a new destination. During the 60s, Pakistan relocated capital city from Karachi to one of the best living cities of Asia in Islamabad. Myanmar designed entirely a new capital city Naypyidaw away from Yangon. Bangkok was declared capital away from ancient capital of Ayutthaya for security reason. Likewise, Brazil moved capital from Rio de Janeiro to Brasilia to mitigate overcrowding, congestion and pollution.

The author, a retired UNHCR international staff and the President of We for Nepal, has served for over three decades in countries of Africa, Asia, the Middle East and Europe
Neupanek1950@gmail.com