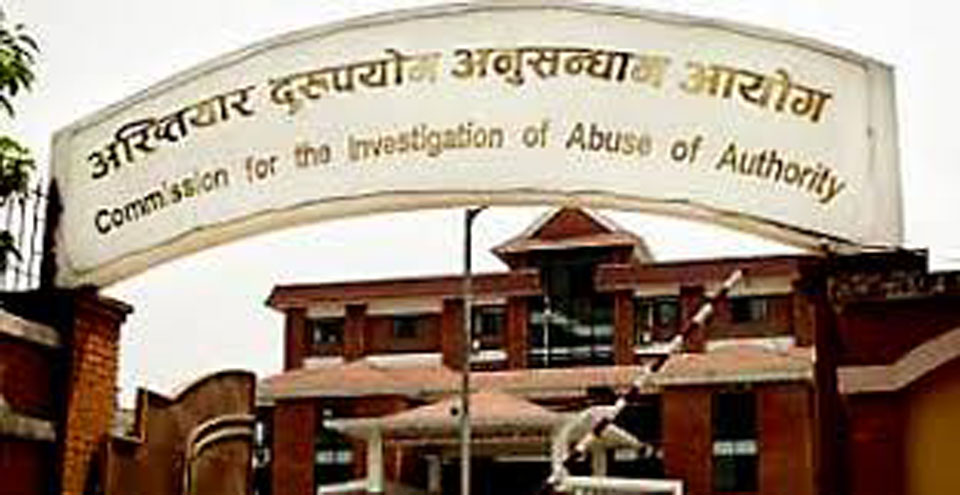 KATHMANDU, August 21: On January 7 this year, a team from the Commission for the Investigation of Abuse of Authority (CIAA) caught Shyam Aryal, a non-gazetted official of Lalitpur District Court, red-handed while taking a bribe from a murder-accused.

Aryal who had promised to settle his case was arrested. But a day after Aryal’s arrest, the antigraft body received a letter from the Supreme Court. The letter issued after consulting the then Chief Justice Sushila Karki had asked the anti-graft body not to investigate Aryal’s case.

Instead, the apex court asked the constitutional anti-graft body to hand the accused over to the court administration without further delay.

“The Supreme Court had asked us in writing to hand over the accused and we did accordingly although the court later sent the accused back to us,” CIAA Spokesperson Jib Raj Koirala recalled the incident, “Bringing him under our investigation process wouldn’t have been possible, if the media hadn’t raised the issue.”

The apex court effort to obstruct the CIAA’s investigation and dismiss the bribery case was foiled because of the media, according to CIAA officials. Legally, probing into corruption or wrong doings of judges falls under the jurisdiction of the Judicial Council, the body responsible for holding judges accountable, but the court wants to settle cases involving the civil servants working there, too, on its own.

Parliament ratified the United Nations Convention against Corruption (UNCaC) on February 25, 2011, committing to bring key state institutions including the judiciary and the army under the ambit of the CIAA. Subsequently, the government formulated a national strategy and action plan aimed at bringing these institutions under the CIAA’s jurisdiction in accordance with the spirit of the UN Convention.

The action plan formulated by the then Baburam Bhattarai government had pointed out the need for amending 27 existing laws, formulating seven new laws and establishing several other financial oversight bodies to expand the anti-graft agency’s ambit.

Acts in accordance with the action plan could entrust the antigraft body to investigate corruption in the judiciary, Nepal Army, BFIs, I/NGOs, the private sector and political parties.

The action plan had listed out works to be done for revising national laws in accordance with the UN Convention, which Nepal is a party to since 2011. But the government has not succeeded in revising any law as per the mandate of the UN Convention. “So far, we have received three revised draft bills related to the Corruption Prevention Act, CIAA Act, and Good Governance Act."

Other agencies are also said to be working to revise the laws although they have not submitted any draft bill to us” said Hari Prasad Panthi, spokesperson for the Prime Ministers’ Office.

Former CIAA chief Suryanath Upadhyay terms the government’s delay in revising the national laws in accordance with the UN Convention as its negligence towards minimizing corruption. “It seems to address internal affairs i.e. constitution writing and implementation of federalism have overshadowed the task of curbing corruption. It’s worrying that both the government and anti-corruption agencies are not doing even doable jobs,” observes Upadhyay.

There are almost no complaints against the judiciary and army,” explains CIAA Spokesperson Koirala, “Even if someone registers a complaint, we simply forward them to the offices concerned as we are not mandated to probe into corruption cases involving certain institutions like the army and the judiciary.”

On an average, the CIAA receives around 90 complaints daily but there is rarely a complaint against the judiciary and the army. CIAA officials say people don’t want to register corruption complaints against these institutions because they are not convinced that that the anti-graft body would be able to investigate corruption cases involving the officials of the judiciary and the army.

Both the army and judiciary have their own mechanisms to deal with corruption while the private sector is still outside the CIAA’s jurisdiction.

Glimpse of Buddha's remains to public

KATHMANDU, Oct 16: Ashti Dhatu, the remains of the Gautam Buddha, has been put on a display for public view... Read More...