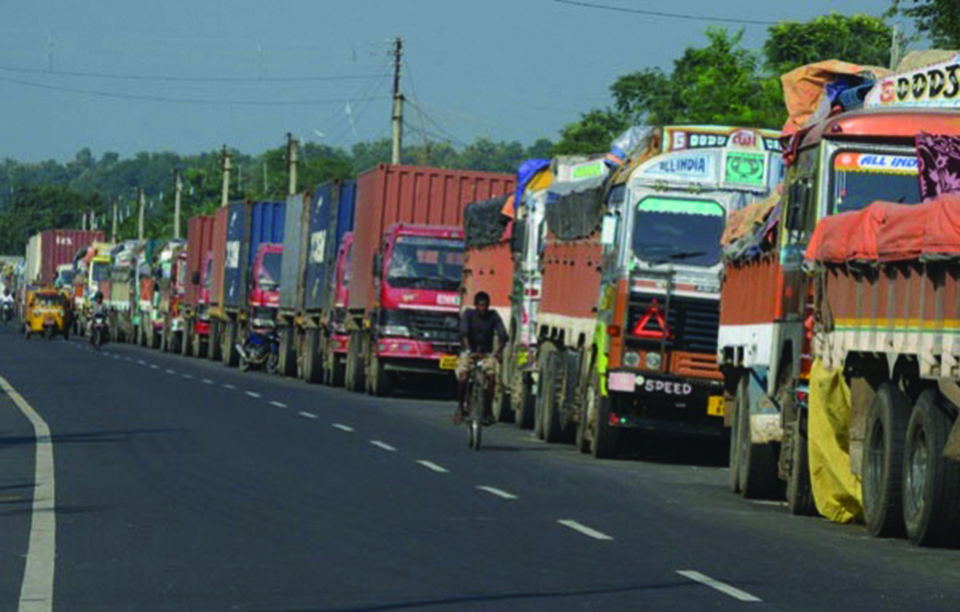 Nepal should engage with both China and India through increased connectivity, trade facilitation and investment enabling measures to enhance its economy

Wedged between the two larger global economies, Nepal is not yet prepared to leverage its locational advantages. Both China and India had demonstrated an impressive economic growth of more than seven percent over the last decade and half while the performances of Nepali economy was marred by the armed conflict and political upheaval followed by a decade long transition. The ripples of transition are still reverberating despite the formation of government, commanding two-third majority at the center, provinces and local level.

Bilateral trade of Nepal with India and China has been steadily rising over the past two decades. This has reached more than three-fourth of overall Nepali trade in recent years. The overall external trade of Nepal in 2000-01 was NRs 171 billion presenting an export import ratio of 1:2.   The figure in 2017-18 has gone up NRs. 1.3 trillion with export import ratio of 1:14. This abysmal figure of trade is attributed to increased imports of consumer goods from the neighboring countries.

Trade preferences are available from India and China under the cover of bilateral trade agreements or the unilateral concessions. Nepal-India trade treaty provides duty free market access to all types of Nepali goods in the Indian market except three items of tobacco, alcoholic liquor and perfumes. Government of China has offered unilateral preferences to the Nepali export in more than 8000 items in six digit customs classifications.  These provisions are in place over a long period, but our export performances are not showing any sign of improvement.

The debate on burgeoning trade deficit comes as a whirlwind when the quarterly trade date is made public by Nepal Rastra Bank or Trade and Export Promotion Center (TEPC). The newspapers make this the headlines in their finance and business pages and views of government officials and other stakeholders are drawn up in their news reporting. The rhetoric repeatedly appears in the news media but no concrete plan and programs to address the issue is put forward except the lip service by the concerned authorities.

One of the various reasons may be inducement and enticement of the government to collect more revenue that incentivizes the import of luxury goods, adding insult to the injury.

The objectives of free trade or preferential agreement lie in achieving complementarity of trade which comes from the enhanced investment and reducing the barriers to trade. But, the case of Nepal’s engagement with her neighbor does not support this argument.  India and China both are leading trade partners of Nepal particularly from the perspectives of filling the demand gap of essential goods and services.  Bilateral trade figures have been built upon the foundation of Nepali import, since the share of Nepali export in both markets is virtually nil.

Investment is the key to generation of trade, but the investment linkages of Nepal with both neighbors are  very weak. According to the World Investment Report published by UNCTAD, outward investment from China was US$ 125 billion and US$ 11 billion from India in 2017. Indian and Chinese investments are now focused more on African countries. India is also making investment in Russia while China has made huge investment in Pakistan for development of China-Pakistan Economic Corridor.

Despite being close to both India and China, Nepal has not been able to leverage the diplomatic clout for bringing substantial investment from these countries. Developing a meaningful partnership with the neighbors has remained a distant dream in the wake of poor performances of Nepali diplomacy and asymmetry in economic and strategic strength.

Diplomacy is the key

To remedy bleak trade and investment situation, we need not only strategic approach but also a smart diplomacy in order to increase the industrial production and services by garnering support and investment from the potential countries. Trade and investment are the intertwined sectors that require creating stakes of the investors for achieving a sustained market access to the investor’s home country. This notion is well entrenched in the global trading regimes that also work as the factor for normalizing or improving diplomatic relations between the trading nations.

Economic interest is taking over the political interest as it can be seen from the bilateral engagement of India and China. Although India and China seem to be competing in defense and strategic space in the region, their relation in the economic front is less hostile, even cooperative. Bilateral trade between China and India in 2000 was US$ 2.92 billion which grew to US$ 70 billion in 2016 increasing economic complementarities between the two nations.

Nepal as a small economy pursuing the political plurality and liberal economic regime has not been able to tread along with its two neighbors. Forging the trilateral cooperation could be the best option for a buffer country, but this seems to be farcical due to non-convergence of this idea on both sides of the borders.

The alternative for Nepal, thus, would be engaging bilaterally with both neighbors through increased connectivity, trade facilitation and investment enabling measures. This requires a two pronged approach: Putting the domestic affairs in orders and using tools of diplomacy.

World Bank’s doing business report has presented a bleak picture of investment regime of Nepal as the country slipped back by five positions landing it in 110th position out of 190 countries. This does not send positive message to the potential investors.

Prosperity can be only built upon the foundation of increased investment and employment for the people. Thus improving the investment enabling conditions has become a priority need of the country. Besides, our diplomatic effort should be geared towards making a comprehensive deal for sustaining the trade and economy for a longer term rather than simply focusing on getting piecemeal support from the neighboring countries.

The author is former Secretary of Government of Nepal. Views are personal

A transit agreement with China was a long time coming. Nepal should have pursued one in the aftermath of the... Read More...