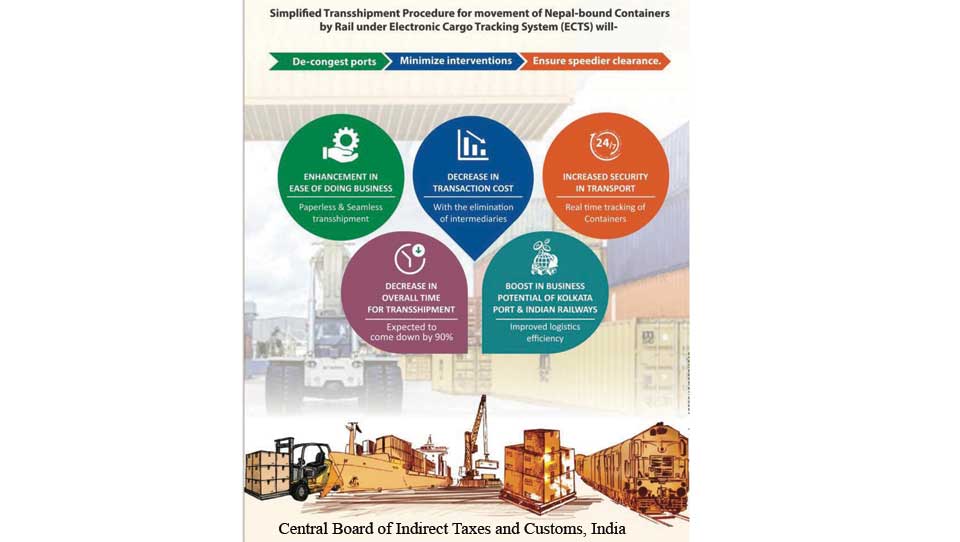 The first cargo train with the electronic tracking system equipped with the newest technology was inaugurated by Vinit Kumar, chairman of Kolkata Port Trust and Ek Narayan Aryal, Kolkata-based commissioner for customs and consul general of Nepal. The new transshipment procedure is introduced as a pilot project in the rail route from Kolkata/Haldia to Birgunj dry port.

The implementation of new technology brings with it features like tracking functionality, high-security electronic locks and a faster rate of transshipment procedure that helps to control possible misuse of supplies along the route.

This is also expected to significantly reduce the time taken for transshipment procedure, which is expected to come down by 90 percent, according to India’s Central Board of Indirect Taxes and Customs, responsible for administering indirect taxes for the Government of India.

Under the newly introduced modality, Nepali traders and importers will also benefit from the added advantage of not having to file Transit Declaration, which significantly decreases bureaucratic hurdles for traders. The importers and traders are also optimistic that the new mechanism will rid them off demurrage charges in the ports.

The high-security electronic lock, a feature of ECTS, will also enhance the ease of doing business for traders and importers in the country by reducing the cost by decreasing the number of intermediaries when bringing cargoes to Nepal.

The implementation of the new technology is also expected to increase security for the goods in Nepal-bound cargoes due to the added feature of real-time tracking of the containers.

Alongside, the improved logistics tracking will also help in decongesting the hub in Kolkata and also increase the efficiency of the Indian Railways.

The development in trade mechanism is a result of a bilateral meeting between the two governments that was organized to discuss the viability of implement ECTS System to the trade between two countries. The meeting, which was held in collaboration with Asian Development Bank (ADB) in June last year in Mumbai, included senior officials from the concerned government agencies from India and Nepal.

The recent implementation of improved transshipment technology will further enhance the trade relationships between India and Nepal and will also bolster the commitment of the Indian government to improve transit facilities for Nepali trade.

KATHMANDU, Aug 6: Authorities of Kolkata and Vishakapatnam, which is also known as Vizag, ports of India have expressed commitment... Read More...