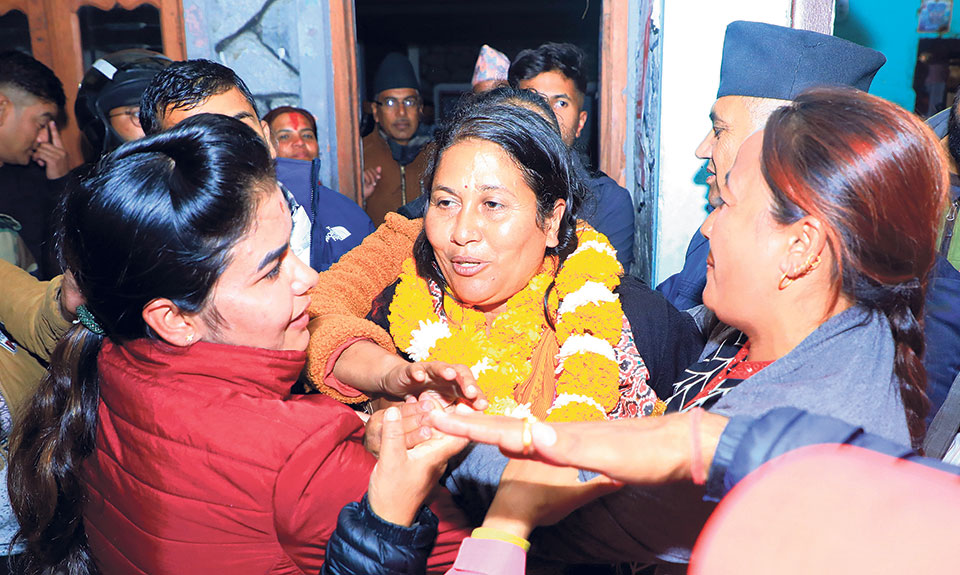 Nepal Communist Party's Bidya Bhattarai is congratulated by supporters on Sunday after she won Kaski-2 parliamentary constituency in the by-elections held on Saturday.

KATHMANDU, Dec 2: By-poll results have shown no major change in the strength of the ruling Nepal Communist Party (NCP) and the main opposition Nepali Congress (NC) than the mandate they had secured in the 2017 elections.

Early results from vote counting show the ruling NCP bagging the most seats where its leaders had emerged victorious in the election held three years ago.

The main opposition Nepali Congress could not snatch seats from the ruling NCP except in a provincial assembly seat in Bhaktapur and a few positions of local governments.

Nepali Congress is the second largest political force in terms of the seats won in the elections. Some newly-formed parties like Bibeksheel Nepali Dal and Sajha Party,  which introduced themselves as alternative political forces, performed poorly in Saturday’s elections.

Political observers had predicted that the by-poll would be a mini-referendum on the ruling NCP’s policies. But the poll results show public support for the ruling party still remains unchanged.

“The election results show that the level of popularity of the government has not come down to the level suggested by the media,” said political analyst Krishna Pokharel.

Pokharel argued that the defeat of the ruling NCP in a few places seems to have been caused by various other factors such as the candidates themselves, some local issues affecting the local people and internal dynamics of the party.

The seat had fallen vacant after the then tourism minister Rabindra Adhikari, who was elected from NCP, was killed in a helicopter crash in Taplejung in February.  The NCP had fielded Adhikari’s widow in the by-election.

Bhadel garnered 13,448 votes while got 11,197 votes. In the 2017 provincial assembly election, NCP leader Hari Sharan Lamichhane was elected from the constituency.

NCP candidate Bimala Oli was leading the vote count in Dang 3 (b) and Khim Bahadur Shahi of Rastriya Janamorcha, who also enjoys support of the ruling NCP was leading in Baglung 2(b), according to early results released by the Election Commission Sunday.

In 2017, EC had conducted all three sets of polls in local, provincial and federal government. But the election body had to conduct the polls in 52 vacant positions after leaders elected for these positions died naturally or in accidents. 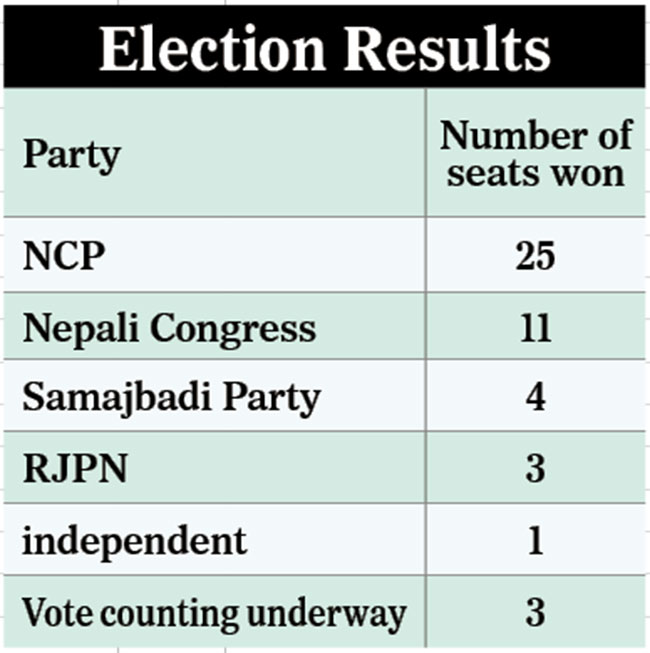 BAGLUNG, Nov 11: Despite failing to officially withdraw his candidacy for the provincial by-election in Baglung, a candidate from the... Read More...

KATHMANDU, Sept 14: With the government’s backing, a proposal of the ruling Nepal Communist Party (NCP) to provision a seven-year... Read More...