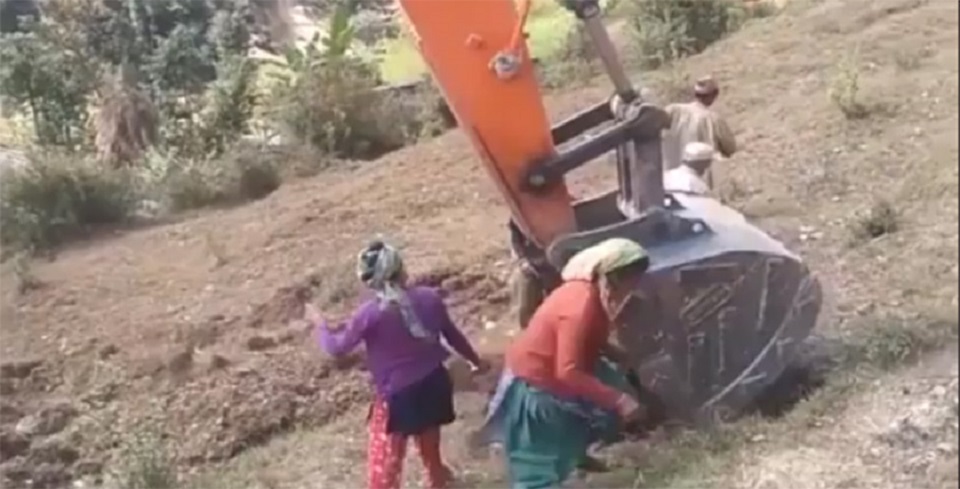 BAITADI, Oct 22: Eight people were injured, two of them seriously, when the bulldozer driver attacked them with the bucket of the vehicle in course of a dispute regarding the construction of the road.

A viral video on social media shows the driver is being seen attacking Gaura with the bulldozer bucket. Those seriously injured in the incident were taken to the District Hospital Baitadi for treatment. The District Hospital referred them to Kohalpur Hospital in Banke after they could not be treated there, chief of the District Police Office Baitadi, Deputy Superintendent Dilli Narayan Pandey, said.

One group of people was in favour of the construction of the road from Sunnakhan to Parsa while the next group opposed it. Hansraj Joshi, a local resident, said that the party constructing the road forcibly operated the bulldozer on their land even though they were trying to reach an understanding on the issue. According to him, the land on which one side tried to construct the road is a Guthi land (land belonging to a religious trust).

Joshi said since the plot was a Guthi land, they proposed to first forge a consensus among all the locals before going ahead with the road construction but the side supporting the construction tried to push through.

Another local, Durga Datta Joshi, said there was a dispute regarding the construction of the road and the situation took a nasty turn. The clash between the two sides erupted after Gaura Joshi was shoved by the bulldozer bucket.

Chief District Officer of Baitadi Ananda Poudel said that the dispute would be settled through negotiation with the disputing parties. Meanwhile, police have arrested Kishor Bohara, the bulldozer driver who shoved a local woman with the bucket of the bulldozer amidst the dispute over construction of a rural road.

As the video relating to the incident went viral on social media, the local police arrested the driver who is a local resident of Dehimandau, Dasharath Chand Municipality-2. Police said they have detained three more people in connection with the incident. Police investigation is on in this regard, it is stated.

BAITADI, Oct 23: After a video of an excavator haphazardly attacking the residents of Dasharath Chand Municipality went viral on... Read More...

BAITADI, 28: The Patan Municipality in Baitadi has decided to offer accident insurance service for free to the migrant workers... Read More...