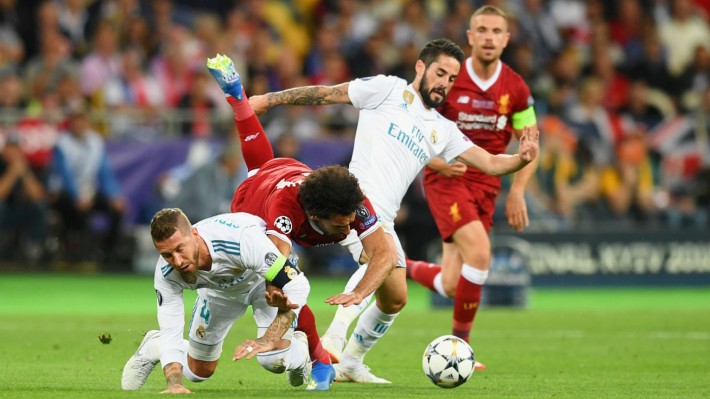 Mohamed Salah believes he’ll be fit for next month’s World Cup but that hasn’t stopped one angry Egyptian filing a €1bn (£873m) lawsuit against Sergio Ramos.

The Real Madrid captain was the cause of Salah’s nasty fall during Saturday’s Champions League final and initially the prognosis was bleak for the Liverpool talisman. The left shoulder that bore the brunt of his fall, as Ramos grappled him to the ground, was thought to have ligament damage severe enough to sideline Salah from the World Cup.

Liverpool manager Jurgen Klopp said on the club’s website that the injury was “really serious”, but Salah subsequently told Egypt via Twitter that he was “confident” he would recover in time for their first World Cup match against Uruguay on 15 June. “Your love and support will give me the strength I need,” he added.

There was a similar upbeat message from the Egyptian FA, which said Salah had suffered a sprain in the shoulder ligaments but they were “optimistic” he would be fit for Russia.

During an appearance on national broadcaster Sada El-Balad, Wahba accused Ramos of a deliberate act that inflicted “physical and psychological harm” on the whole country.

He added: “Ramos intentionally injured Mo Salah and should be punished about his actions. I’ve filed a lawsuit and a complaint to Fifa.”

Asked what he hoped to obtain from his lawsuit, Wahba replied: “I’ll ask for compensation, which could exceed €1bn, for the physical and psychological harm that Ramos gave Salah and the Egyptian people.”

If the lawsuit is successful Wahba has promised to donate the money to Long Live Egypt Fund. A petition has also been launched on Change.org, demanding that Uefa and Fifa take action against Ramos for what he did to Salah. As of this morning it had received 459,000 signatories.

Meanwhile, elements of the Egyptian press have blamed Saudi Arabia for what happened to Salah, claiming it’s all part of a dastardly plot by their World Cup rival. The two countries are in the same group and Turki al-Sheikh, the Saudi sports minister, has spoken in the past of his wish to see Salah “absent from the World Cup”.

KATHMANDU, Nov 30: The Commission for the Abuse of Authority (CIAA) has filed corruption cases at the Special Court against former... Read More...

5 teams advance at Euro 2020 without playing
10 hours ago