KATHMANDU, Dec 8: The Election Commission (EC) has distributed the seats proportionally for the provincial assembly and House of Representative elections held on November 20.

After the counting of votes was over on Tuesday, the Election Commission distributed the seats of the provinces and the House of Representatives proportionally on Wednesday. The commission has assigned seats according to sub-sections 2 and 6 of section 60 of the House of Representatives Election Act 2074 BS and schedule 1 and 2 of the same act and sub-section 2 of section 60 of the State Assembly Member Election Act 2074 and schedule 1 of the same act.

On the direct side, independent candidates along with representatives of 12 parties will represent in the House of Representatives. According to the latest direct results, Nepali Congress (NC) has become the first party with 57 seats. CPN-UML won 44 seats, CPN (Maoist Center) 18 seats and CPN (Unified Socialist) won 10 seats. Rastriya Swatantra Party (RSP), Rastriya Prajatantra Party (RPP) and Janata Samajwadi Party (JSP) won 7 seats each.

Likewise, the number of parties getting proportional seats in the provincial assembly has reached 13. In which, UML has got the most 70 seats in all seven provinces while NC has got 64 seats. Similarly, the Maoist Center got 29 seats, RPP 17, and Unified Socialist 9 seats. Despite winning 10 direct seats in the House of Representatives, Unified Socialist has failed to get the three percent vote required for proportional representation. However, in the provincial assembly, it has got proportional seats in the provinces except Gandaki province. Similarly, JSP and Janmaat Party got 9/9 seats, Nagarik Unmukti got 5 seats, LSP got 3 seats, NWPP got 3 seats. Rashtriya Janamorcha, Hamro Nepali Party and Nepal Sanghiya Samajwadi Party got 1/1 seat each. 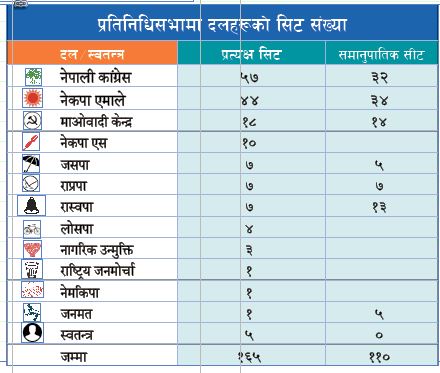 KATHMANDU, May 20: Political parties associated with the five-party ruling coalition have won the elections to more than two-thirds local... Read More...

KATHMANDU, May 7: With preparations for the May 13 local level election coming to a final phase, the Election Commission... Read More...

The Election Commission (EC) has urged all the stakeholders concerned including the leaders of the political parties not to make... Read More...

Weather to be cloudy and foggy in Terai, snowfall in highlands and Himalayas
27 minutes ago

#Book Review The Old Man and The Sea
40 minutes ago