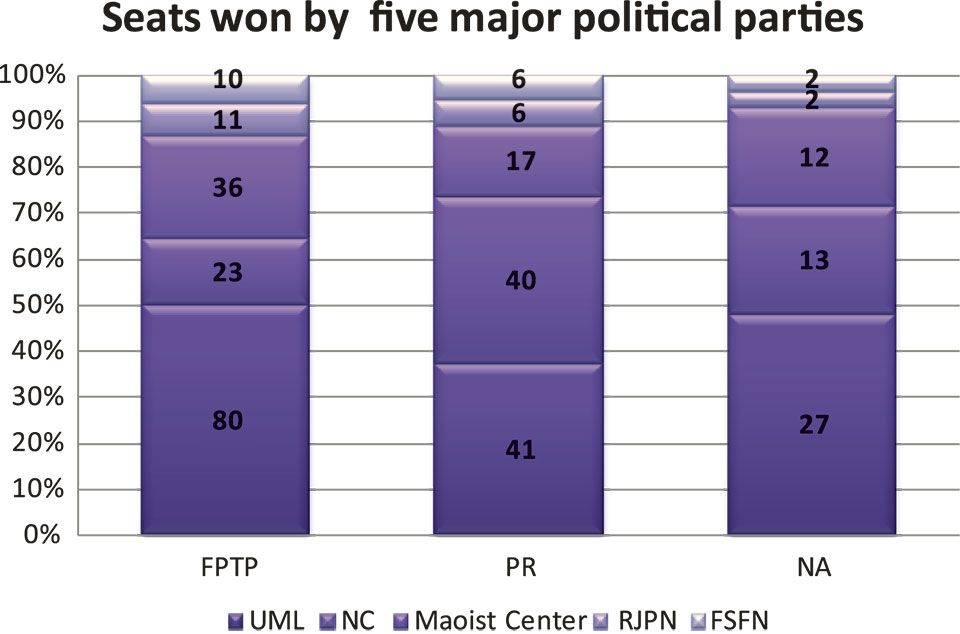 Maoists, NC get 17 seats each

KATHMANDU, Feb 10: More than two months after the parliamentary elections, the Election Commission (EC) on Friday announced the proportional representation (PR) results for the lower house.

As per  the results published by the election body,  CPN-UML has secured 41 seats out of the total 110 whereas its electoral ally CPN (Maoist Center) got 17 seats. Nepali Congress also got 40 seats while Rastriya Janata Party Nepal (RJPN) and Federal Socialist Forum Nepal (FSFN) each bagged six seats in the lower house of  parliament.
Altogether 49 parties contested under the PR category but only five parties managed to secure seats in  parliament as most of them failed to meet the three percent threshold.

Out of the total 95,44,779  valid votes,  UML has secured 31,73,494 votes (37.1 percent). NC was a close second. It secured 31,28,389 votes (36.6 percent) whereas Maoist Center got 12,03,721 (15.3 percent), and. RJPN and FSFN  4,72,254 (5.5) and 4,70,201 (5.5) out of the total valid votes.
Since the constitution has a provision for electing one-third women out of the total membership of parliament including both houses, UML needs to name at least 37 women members to make its presence in parliament inclusive. Similarly, NC needs to elect 20 women candidates from its closed list, and Maoist Center 16 women  under  PR. RJPN and FSFN have to elect five women members each .
Calculating the parties' strengths in  parliament and the mandatory constitutional provision for  electing at least one-third women, the election body has asked the parties to elect the maximum number of women candidates under PR category by Monday.

If the seats secured by the two left parties--UML and Maoist Center--are to be taken together, the left alliance seems to have a commanding majority for leading the federal government. The alliance is also likely to form the governments in six of the seven provinces.

Out of total 165 seats under the first-past-the-post (FTPT) electoral system, UML has won 80 seats whereas Maoist Center has secured 36. The ruling NC was limited to 23 seats and RJPN and FSFN won 11 and 10 seats respectively. The number of popular votes secured by the individual parties under FPTP  is not  yet known.

The election body had demurred over  allocating the PR seats, citing ambiguous constitutional provisions. This has led the parties winning the polls to stay away from government for months.

The EC plans to submit the overall poll results to the Office of the President by February 19. Once the poll results are officially handed in, the parties commanding a majority will form the new government.

EC in fix over PR seats for lower house

KATHMANDU, Dec 29: Polarization among the political parties over the modality for electing the National Assembly has put the Election Commission... Read More...

KATHMANDU, Dec 22: Election Commission (EC) has announced the number of seats secured by the political parties in the Provincial Assembly elections under... Read More...