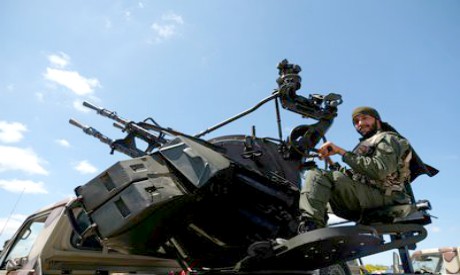 LIBYA, April 8: The Libyan National Army (LNA) force of Khalifa Haftar, which backs a parallel administration in the east, last week launched an advance on Tripoli in the west, home to the internationally recognized government.

The offensive intensifies a power struggle that has fractured the oil and gas producer since the 2011 overthrow of Muammar Gaddafi.

The LNA reached the southern outskirts of the capital on Friday and says it took the former international airport, though the Tripoli military officials deny this.

At least one warplane carried out an air strike in the area, a resident said.

“The air force took part for the first time in the military operations,” said LNA spokesman Ahmed Mismari. “It conducted a very successful operation to secure the airport road (to city center),” he added.

The LNA moved up north from on the road from former airport in the district of Khalat Furgan, coming some 11 km from the city center, a resident said, adding he could see the troops as forces loyal to the Tripoli government withdrew.

The U.N. mission to Libya (UNSMIL) called on Sunday for a truce for two hours in southern Tripoli to evacuate civilians and wounded, it said in a statement without giving details.

But the true was not observed by evening, one U.N. official said.

In another sign of the situation worsening on the ground, a contingent of U.S. forces supporting the U.S. Africa Command evacuated Libya for security reasons, a U.S. statement said. It gave no details.

Forces allied to the Tripoli government meanwhile announced their own operation called “Volcano of Anger” to defend the capital, a spokesman said, without giving details.

The offensive has taken the United Nations by surprise, undermining plans to find agreement on a road map for elections to resolve the protracted instability in Libya.

Lawless since Gaddafi was toppled by rebels backed by NATO air strikes, Libya has become the transit point hundreds of thousands of migrants trekking across the Sahara with the objective of reaching Europe across the Mediterranean Sea.

Haftar, 75, who casts himself as a foe of Islamist extremism but is viewed by opponents as a new dictator in the mould of Gaddafi, enjoys the backing of Egypt and the United Arab Emirates, which see him as a bulwark against Islamists and have supported him militarily, according to U.N. reports.

The UAE, however, has joined Western countries in expressing its deep concern about the fighting.

“No justification for LNA move on Tripoli,” UK Foreign Minister Jeremy Hunt tweeted, adding he was watching the situation very closely and would discuss the “next steps” with the European Union on Monday.

In the past, Haftar has struck deals with armed factions outside Tripoli to advance his forces. But gaining control of Tripoli - the ultimate prize for Haftar’s eastern parallel government - would be far more complicated.

Armed groups allied to the Tripoli government have moved more machinegun-mounted pickup trucks to defend Tripoli from Misrata down the coast. Misrata is known for a spirit of resisting “old regime” figures, developed during 2011 when pro-Gaddafi forces besieged it for three months.