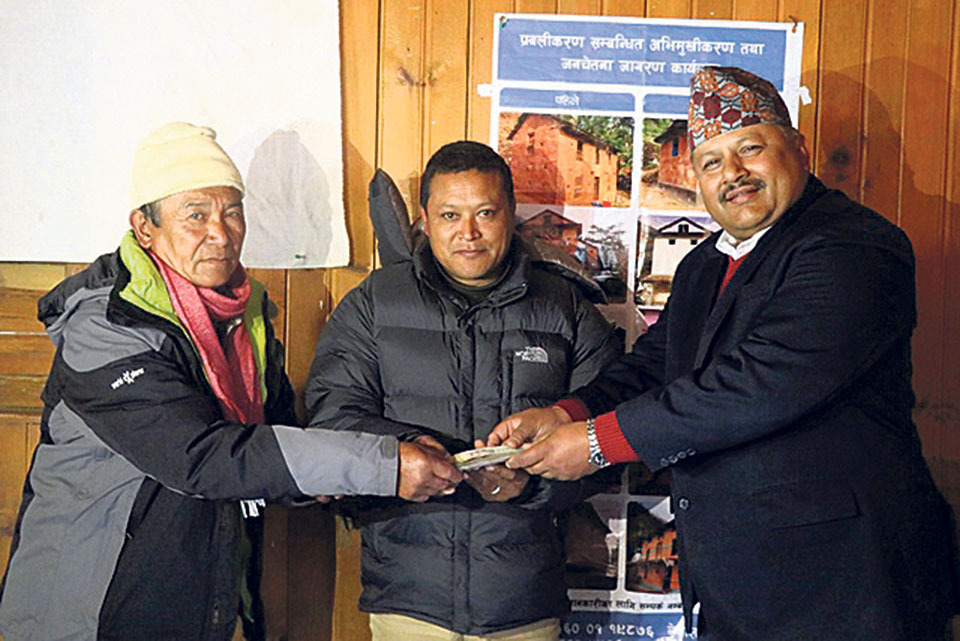 Angbabu Sherpa (left), the uncle of an earthquake victim Chhiring Sherpa of Solukhumbu, returns Rs 50,000 that his nephew had received as first installment of the housing reconstruction grant to an official of the National Reconstruction Authority (NRA), in Solukhumbu on Wednesday after Chhiring was unable to rebuild his house without the deadline set by the NRA. Photo: Sikhar Jung Shrestha/Republica

SOLUKHUMBU, Dec 13: An earthquake victim of Solukhmbu has returned the relief amount provided by the government for the reconstruction of his quake-damaged house. Chhiring Sherpa of Solududhkunda Municipality-6, Khoriya has returned Rs 50,000 of the first tranche of the grant to the National Reconstruction Authority (NRA).

Sherpa was obliged to return the amount after not being able to construct his house within the deadline set by the NRA. Quake victims were strictly told to meet all the requirements for receiving the second installment of the grant by mid-January. Handing over the relief amount to Bishnu Lamichhane, chief of the District Project Implementation Unit (DPIU) on Tuesday, Chhiring's uncle Angbabu Sherpa said, "My nephew decided not to misuse the money provided by the government as he can't construct his house within the deadline."

Chhiring has planned to build a quake-resistant house with his own money in the future. He is currently living in the United States of America for employment. Earlier, he had urged his son to accept the first tranche of grant. He could not reconstruct his house as he is abroad and his son had to go to India for his study. With this, Chhiring has become the first quake victim to return the grant in the district.

"Victims who accepted the grant but have no intention to build house or cannot afford to build their own houses should better return the grant. It is a positive move," said DPIU chief Lamichhane. He further informed that the authority itself would start collecting grant if the victims do meet the prerequisite for receiving the second tranche by mid-January.

Those willing to return the relief amount should contact the district chapter of NRA. They will have to write an application requesting to remove their name from the list of beneficiaries and return the amount.

BARPAK, May 10: Barpak, a village situated in the Northern part of Gorkha, was the epicenter of 2015’s earthquakes. The... Read More...

The landless squatters are yet to begin reconstructing their houses owing to financial crunch ... Read More...

54 quake damaged monasteries to be rebuilt in Solukhumbu

SOLUKHUMBU, June 23: The National Reconstruction Authority (NRA) has approved the budget for the reconstruction of 54 monasteries of Solukhumbu... Read More...