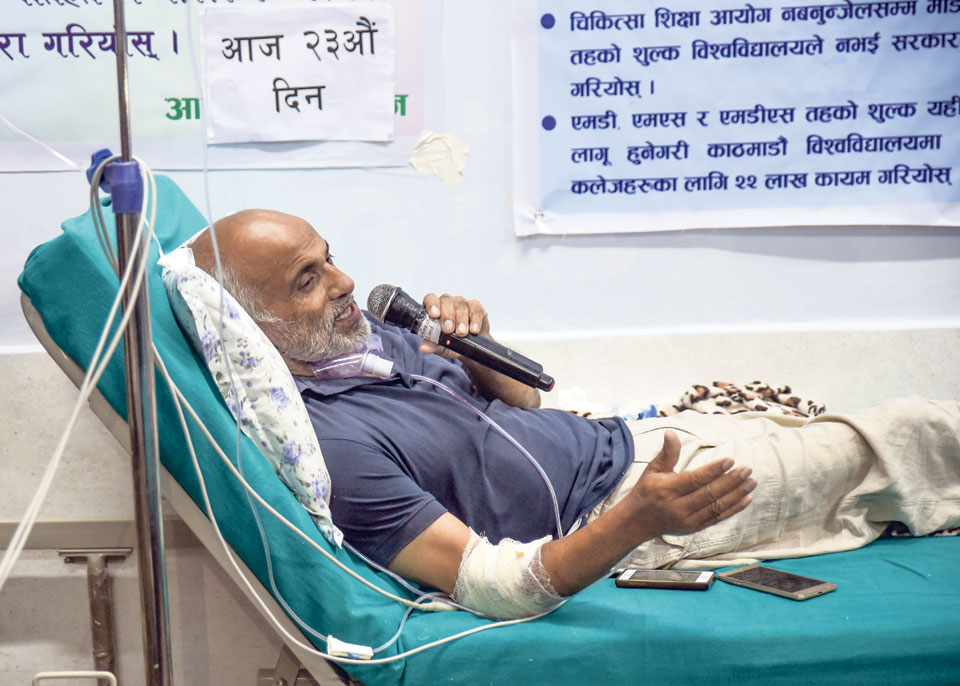 KATHMANDU, Aug 15: After the government took the initiative to address almost all his demands, Dr Govinda KC, professor at the Institute of Medicine (IOM), postponed his 11th fast-unto-death on its 23rd day Tuesday. This has been his longest  hunger strike so far.

The government is ready to bring in the Medical Education Bill as recommended by the Mathema task force, appoint deans for IOM as per its recommendation, and Tribhuvan University will allow IOM to fix the fees and quotas for medical colleges.

A cabinet meeting on Tuesday has formed  a panel headed by the chief secretary to study  the purchase of Manmohan Memorial Institute of Health Sciences. The Medical Education Bill will be tabled after a few days, as per conclusions reached during different meetings held at the prime minister’s  office and his official residence.

However, no written agreement was signed between Dr KC and government this time. “As per the cabinet decision  to address our demands and bearing in mind the flood disaster in the country, we have decided to postpone the hunger strike,” states a statement prepared on behalf of  Dr KC by his talks team. “If the government fails to address the demands within a certain period of time, we will be forced to launch another strike,” the statement warns.

The  statement quotes Dr KC  as saying, “I am disheartened by the toll from the flood disaster. This is a time to help the victims.” KC further said that he would continue to struggle for the betterment of health services. “The Medical Education bill should be approved as per the Mathema report. Otherwise, I will go for another strike,” he further said adding, “Until  decentralized health services are ensured for the people at local level, I will keep on fighting for it.”

Dr KC’s condition had become critical, according to  doctors involved in his treatment. He fainted twice on Tuesday because of low blood pressure, said the doctors. “ He must be admitted to the ICU right now.”