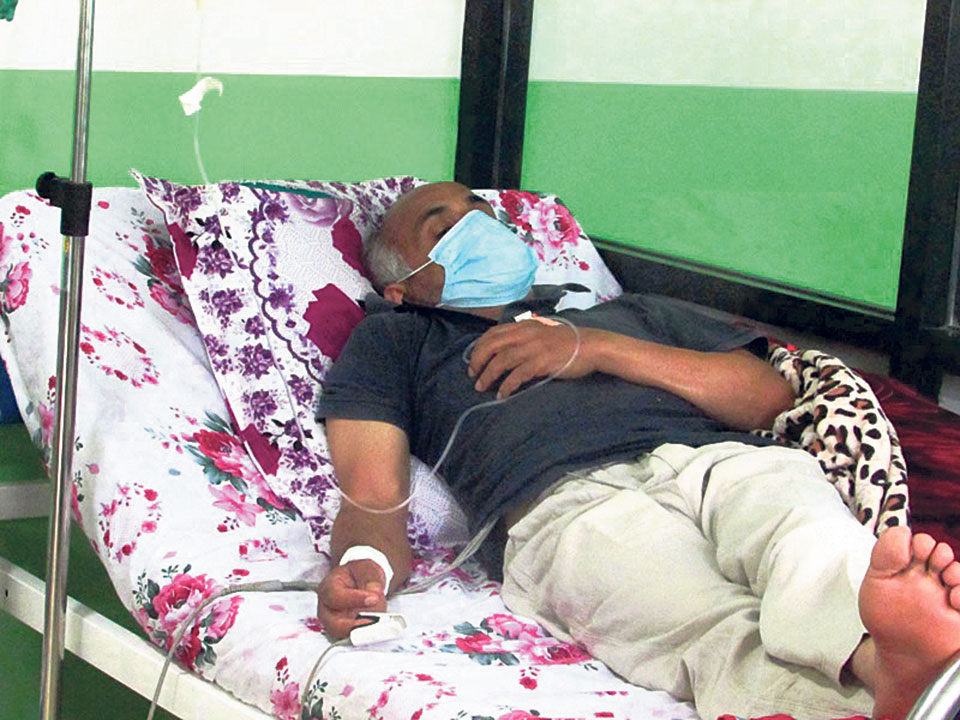 Dr Govinda KC on the 11th day of his fast-unto-death at the Karnali Academy of Health Sciences on Tuesday. Photo: Republica

JUMLA/DADELDHURA, July 11: A tussle between the government and the Jumla-based Karnali Academy of Health and Sciences (KAHS) has been in the spotlight for the past some days. In fact, KAHS by many has been portrayed as “a new opposition” for the government.

Chief District Officer of Jumla, Bishnu Paudel, feels KAHS is standing against the government. The reason this organization has become a pain in the neck for the government is it is supporting Dr Govinda KC who has been staging his 15th fast-unto-death at KAHS in Jumla. The government, which sees KAHS as its opposition, considers Dr KC as its commander.

“How fair is it for a government-run organization to encourage an anti-government activity?” CDO Paudel questioned. Meanwhile KAHS has been maintaining that Dr KC’s health is the responsibility of the academy. Assuring of taking care of Dr KC’s health, vice-chancellor of KAHS, Rajendraraj Wagle said, “If people consider the role played by us as that of the opposition, we choose not to comment on this.”

According to some people, Dr KC became an ‘antagonist’ to the government after he was arrested while trying to enter KAHS through the way of District Administration Office (DAO). Not only the government but also some local parliamentarians like Gajendra Bahadur Mahat see Dr KC as an ‘antagonist’ to the government. According to Mahat, Dr KC has given a reason to some parties to stage unnecessary protests. “It is so childish for a reputed person like him to stage protests to force the government to do what he wants,” said Mahat. He urged Dr KC to reach an agreement through talks instead of continuing his hunger strike.

Another parliamentarian Ganga Tharu demanded Dr KC’s resignation in the parliamentary meeting on Tuesday. She accused him of challenging the government by becoming a shield for the Nepali Congress (NC). “How can a doctor who dares to go against the government as directed by some party be a government officer?” she questioned. Speaking at the meeting, Tharu stated that Dr KC can no more make the government his puppet.

Prime Minister KP Oli too vented his ire against Dr KC saying “a person cannot tell the government what to do.” Meanwhile, Dr KC has clearly stated that he won’t leave Jumla unless his demands are addressed.

Hero to public
On the 11th day of his hunger strike, Dr KC was successful in garnering more love and support from the public. “We don’t see him as carrying any party’s flag. People are making unnecessary speculations about him and seeing the antagonist in him. That’s not fair,” said Padam Shahi of Tila, Jumla. He stated that those who are trying to misrepresent Dr KC feel insecure because of the love and support he has been receiving from across the country. “He is fighting for ordinary people like us,” Shahi said.
Supporting Dr KC’s latest fast-unto-death, the doctors and health workers of Dadeldhura Sub-Regional Hospital have expressed disappointment with the government by wearing black bands.
It has been 11 days since senior neurosurgeon Dr KC started his 15th hunger strike in Jumla. Pressurizing the government to save his life, health workers and doctors staged a protest on the hospital premises. Nepal Medical Association has been staging protests in all 77 districts of the country against the government for neglecting Dr KC’s health and refusing to reform medical sector as per Mathema Commission’s report.
Speaking at the function, doctors warned of continuing their protests until the demands put forward by Dr KC are addressed. Dr Jitendra Kandel, superintendent of Dadeldhura Sub-Regional Hospital, informed Republica that Dr KC had initially planned to go to stage his fast-unto-death in Dadeldhura but later he made up his mind to go to Jumla.

Jumla women hit the streets
Demanding to save Dr KCs life, women from various parts of Jumla organized a procession on Tuesday. The procession started from near KAHS and proceeded toward Krishna Mandir and concluded at the Bus Park.

KATHMANDU, July 21: The political parties always support Dr Govinda KC when they are in opposition but oppose him when they... Read More...