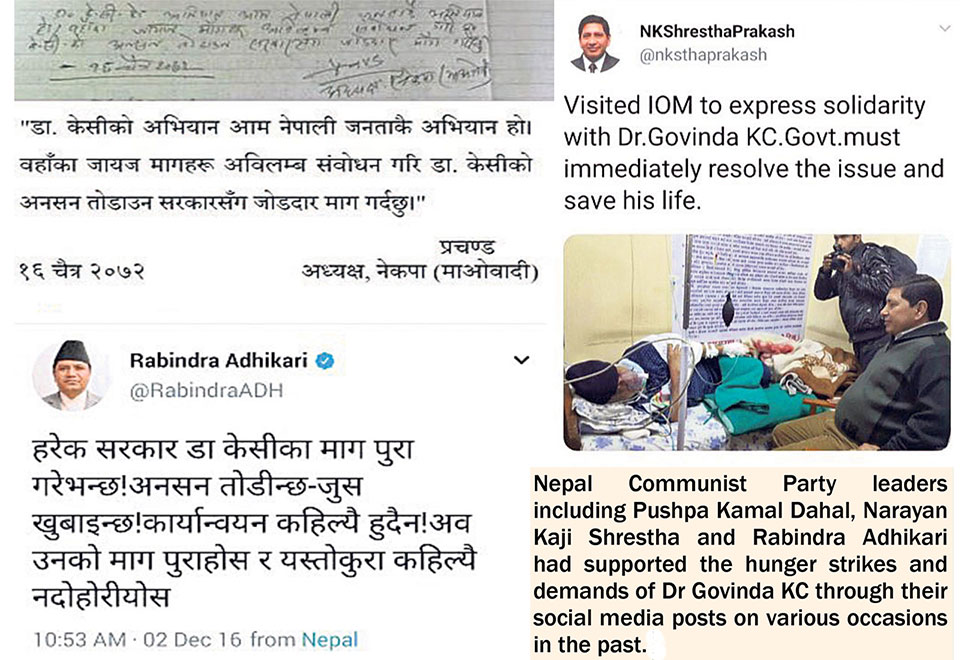 Health and education should not be privatized: Prof Mathema

Dr KC, senior orthopedic surgeon and professor at the TU’s Institute of Medicine, has been on fasts-unto-death for a total of 187 days as of Friday, demanding reform in the medical education sector. He staged his hunger strikes seven times under Nepali Congress-led governments, six times under communist-led governments and twice under the Khil Raj Regmi government.

Pushpa Kamal Dahal, chairman of the Nepal Communist Party (NCP), signed the solidarity paper when visiting Dr KC on March 29, 2016 during one of the hunger strikes.  “Campaign of Dr KC is the campaign of all Nepali people. I strongly demand the government immediately address Dr KC’s demands and pave way to end his strike,” Dahal said in his signatured statement.

A tweet posted by Narayan Kaji Shrestha, spokesman of the NCP on March 29, 2015, says, “Visited IOM to express solidarity with Dr Govinda KC. Govt. must immediately resolve the issue and save his life.”

Tourism Minister Rabindra Adhikari on December 2, 2016 said in his tweet that every government claims Dr KC’s demands have been addressed but never implemented. “His strike is ended by feeding him juice. Now his demands should be fulfilled and may he never need to repeat.”

Almost all the political parties supported Dr KC while they were in opposition but all of them opposed him and did not care to address his demands once they were in government, according to analysts and experts. “Democratic and socialist or even communist governments did not address the concerns of ordinary people but they have always worked for the rich, big business and mafia groups. Now, the PM Oli government has treated Dr KC brutally and taken stance not to fulfill his demands,” Prof Kedar Bhakta Mathema, former vice chancellor of Tribhuvan University, said.

During the tenure of PM Oli two years ago, a four-point agreement was signed with Dr KC. The agreements included buying the Manmohan Memorial College and merging it with the National Academy of Medical Sciences, and approving the Medical Education Act.

Dr KC, who first started staging his hunger strikes in  2012 initiated his 15th hunger strike from June 30 in Jumla.

The Ordinance has provisioned not allowing a university to grant affiliation to more than five private medical colleges, as  recommended by a probe panel headed by Prof Kedar Bhakta Mathema. The report was submitted in June 2015.

Prof Mathema recalled that Education Minister Giriraj Mani Pokharel thanked him for preparing a socialist report in the best interest of ordinary people. “Minister Pokharel told me you did what we should have done,” he added. “Health and education sectors should be operated by the public sector in our country.”

There are 21 medical colleges in Nepal. Among them, 17 are private. Mathema suggested that nationalization of the private medical colleges can be one of the options for solving the present problem. “However, the government is not efficient enough to run all these medical colleges under its own management. The public sector should first be strengthened,” he added. “Only  Gagan Thapa showed interest in solving the problem when he was health minister.”

Bishwa Prakash Sharma, spokesman for the Nepal Congress, claimed that the NC-led governments addressed many demands of Dr KC through the formation of the Mathema Commission and by bringing the Medical Education Ordinance. However, Sharma was not for nationalizing the private medical colleges. “First, the communist-owned Manmohan Memorial College should be nationalized. It can be a model for replicating this concept with other medical colleges.”  A large majority of existing  private medical colleges are owned by persons close to the NC.

NCP spokeman Shrestha said the Ordinance will never be brought as a bill . “We are ready to adopt the concept of the Mathema Report but we will decide what should be included and what should not,” he said. “We will go ahead as per the spirit of the Constitution and the need of the time,” he added. “We have always taken the same stance that we took in the past.”

JUMLA/DADELDHURA, July 11: A tussle between the government and the Jumla-based Karnali Academy of Health and Sciences (KAHS) has been in... Read More...