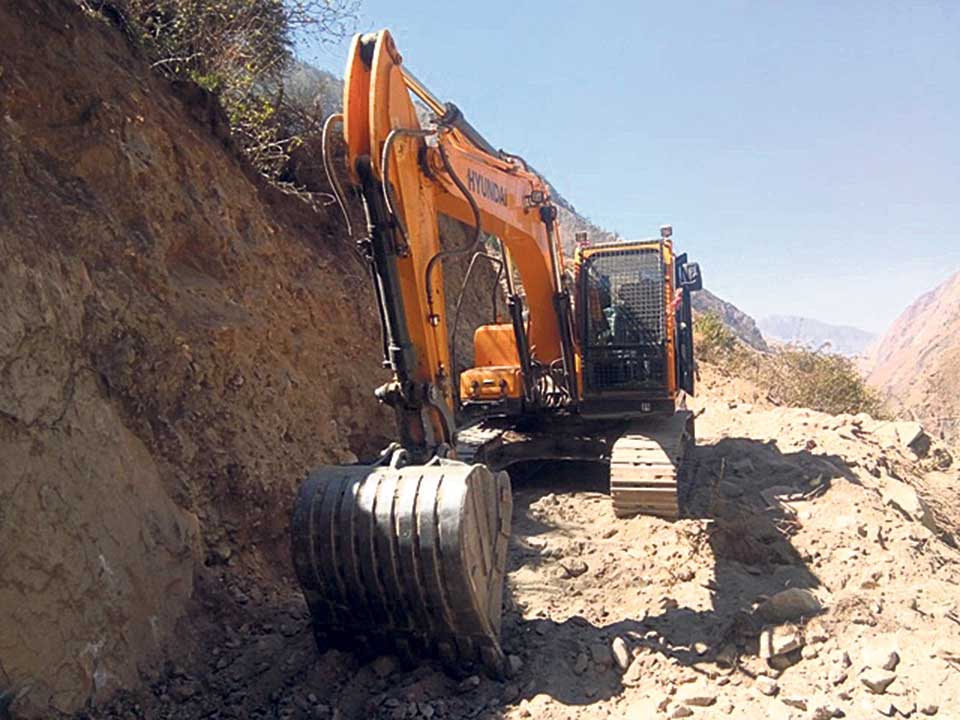 A dozer used for digging a road in Dolpa. | Photo: Republica

DOLPA, Oct 27: A dozer purchased by Tripurasundari Municipality in Dolpa for development activities has instead been a source of earning for the elected representatives.

The municipality spent Rs 10 million for buying the dozer in order to perform various development works for facilitating the people. Instead, this dozer has been the chief source of paying salaries to the people's representatives.

The provincial government had instructed the local authorities to manage their salaries through internal sources. But the failure of the local units to collect adequate tax has left the dozer as the only source of paying salaries at the local unit.

Tripurasundari Municipality started paying salaries to the elected representatives only from mid-July although the elections were held more than a year ago. So far, it has managed to pay three months' salary and Dashain bonus to the office bearers.

The municipal meeting called in the second week of September determined the monthly salary of 19 ward chiefs at Rs 19,000 and Rs 6,000 for ward members. Likewise, the salary of members of the municipality was fixed at Rs 11,000. Furthermore, the salaries of mayor and deputy mayor were fixed at Rs 34,000 and 30,000 respectively. In the past three months, the municipality has spent around Rs 2.4 million for the salaries of altogether 60 elected representatives.

The municipality had collected the amount by collecting Rs 10,000 per hour for digging a road from Khadag to Lha village. According to a source at the municipality, all the money collected by the dozer was spent on the salaries of the office bearers.

Gauri Shankar Upadhyay, a member of Nepali Congress Mahasamiti, said that it is shameful for the people's representatives to accept salaries when they have not been able to fulfill any of the demands of the locals.

The elected representatives have been widely criticized for using the budget meant for the welfare of people for themselves. If a proper source of income is not developed and tax is not collected effectively, the local unit may face difficulties to collect Rs 7.1 million annually for the salary.