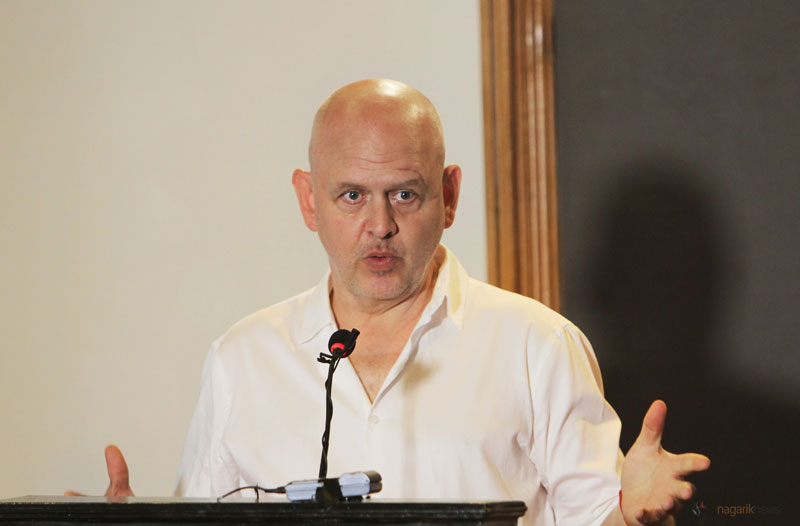 KATHMANDU, Oct 6: Stephen Freiheit, a Denmark based photographer and artist was recently in Kathmandu to attend the annual award event hosted by South Asia Communications (SAC) to honor the ‘Pattern Breakers of the months’ (2014-2016).

Since last three years, Freiheit has been conducting such programs along with a Danish businessman and social worker, Thomas Kurek in collaboration with SAC.

He has been visiting Nepal frequently since last 15 years to bring a remarkable change in the Nepali society. Working as an advisor, Stephen has contributed to be a part of the successful 30-minute monthly TV program aired on NTV Plus that highlights young people who have somehow broken traditional patterns finding solution-oriented ways of approaching challenges.

Assuming you started as an aspiring photographer, how did you opt to take photography as a full-time career?

At first, I wanted to become a painter. When I was 19-20 years old, I moved to Amsterdam to join an art school. But, I felt it was boring to be alone at the studio all the time. I wanted to do projects, collaborate and create things together.

So, I started working with a theater group that covered fashion and assisted photographers. Then, I thought they do it o.k. and I could do it better. It led me to apply for a film school in Czech Republic where I got accepted.

I started with fashion photography. But, I always wanted a twisted angle to it. So, instead of going to model agencies, I went to streets looking for stories.

Yes, I learned lot of lighting, technical stuffs and beauty from fashion photography but, not a special reason to portray them. I learned that one should first be good enough to break rules. And, when I felt like I was good enough, I started breaking rules. That’s how I started.

When I visited Nepal, I felt very much as home and got interested in producing documentary films by collaborating with Thomas and SAC being supported by Danish Centre for Culture and Development. While working for a role of six documentary programs from around Nepal, it was interesting for me to see photos come to life, things move, not only 2D product like a photo or a paint art, but that starts having its own life, that started the production of a monthly 30-minute TV program.

What inspires you the most to press your camera’s shutter?

Variations. Things those are peculiar to me, which feel, smell, and look different.
For me, photography is a mix of therapy for your brain and then it’s like exploring how a society deals with grief or happiness, their culture; like it when something is opposite to what I’m brought up.

Where does photography lie in your pyramid of life?

Come to think of it, I don’t have a pyramid of life. But if it’s there to exist, photography would lie high, probably next to love. (laughs)

What is the driving force behind you willing to work for Nepal?

I actually came to Nepal like 15 years ago with a friend who had been travelling a lot. The second time, I was hired by the foreign ministry to go to Bangladesh to work for a project based on women dominated societies.

I worked there and flew here to join Thomas. We were asked by the Danish Embassy to give a lecture to youths of SAC. It was Saturday and we thought there would only be about seven of them but to our surprise, there were 70 people, all equally interested to bring a positive impact in the society.

Looking at their enthusiasm, it gave me a fresh hint of myself when I was 15 or 16; holding an urge to make a difference which I knew took effort, and somebody had to do it then why not me as a part of it? I recognized the will and energy of youths at this organization and we had a photography workshop and set up an exhibition at Nepal Art Council. So, it wasn’t really me, it was the youths here.

Art has enticed numerous Nepali to be a part of it. However, judged by a common misconception “passion is just a hobby”, every year many long-term artistic dreams shatter. How true is it to you that one should follow their passion to work? And what would you like to cite about it to aspiring artists?

If you can’t stop creating art then you have a feeling inside that tells this is the right thing for you. It takes a long time to reach a point where you really don’t care about what people talk about you. Sometimes, all it takes is one single person to feel your effort. If, it touches a person, it surely will touch some others. Critics will always criticize you and sometimes you need them too but, it takes strength to choose whom to listen to.

How far do you believe that one should have professional devices to practice photography?

There’s definitely difference in quality but, I think one should find a camera that suits them. After exploring parts of it, one realizes they’re better than the camera and that’s when they crave to learn more enough to upgrade it.

If you were to live only a day, would you spend it with your camera? Why?

Well, I’m lucky to be 51. I’ve taken a lot of pictures. (laughs) When I first came to Nepal, I used to live in Bouddha, and literally took pictures of everything.

I even got in the kitchen, photographing from the vapor belonging to huge pots serving lunch to the monks and nuns, and I think they must have thought what a crazy person I was.

But yes, I’d definitely like to hold my camera that day but also if I didn’t get to, I would remember 99% of photos that I’ve taken.  So my head is kind of a hard disk full of photos and I hope it still has few spaces for those last magical moments of mine.

What has your camera, a handy and trustworthy friend, taught you outside its lens?

It has taught me that you don’t need to be greedy. For instance, when I started working on analog cameras with films, it made me spend a lot of money on development.

Later, I realized that if you have motive in front of you, you don’t have to shoot 20 photos of the same thing. At first know what you want, think it further, then move to third or fourth idea, sometimes it is crucial to be spontaneous but, I learned to think about what kind of stories do I want to tell with my photos.

Somewhere you’d never end up with your camera: The Republican Campaign Office

Somewhere you’d never end up without your camera: Nepal (smiles)

Your life without camera would be: Reflective

The must follow rules of royal wedding in England

With just one day to go, Prince Harry and Meghan Markle are probably experiencing some wedding jitters right, but spare a thought for their 600 guests. Read More...

We witness business graduates who are spending a good amount of their post college time in job searching.  It seems... Read More...