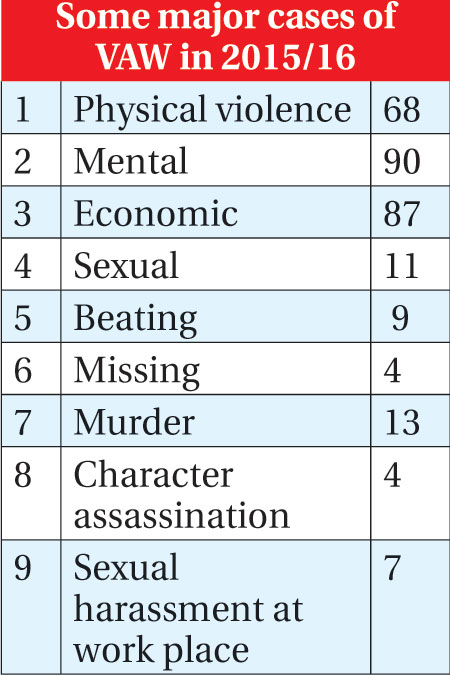 KATHMANDU, Oct 24: Violence against women in the country is till rampant despite several attempts to fight against the social ill.

A woman from Bhaktapur, who took refuge at the National Women's Commission (NWC) recently, was beaten black and blue by her husband.

“He is educated and has travelled abroad. But he always beats me brutally,” said the woman, who is mother of a child. She came to seek help from the commission to solve her problems.

It is not the only case. There are dozens of cases filed at the commission seeking justice, said NWC officials. The cases are related to physical assaults, mental torture, sexual harassment, rape, partiality in offices, disappearance, killing and character assassination.

In the fiscal year 2015/2016, the number of cases of violence against women (VAW) lodged at the commission was 660. According to the commission, 319 cases were solved in the last fiscal year and 341 cases are still open.

“Gender based violence is an increasing trend. It was prevalent in the society in the past and continues to thrive in the present day too,” said, Bhagawati Ghimire, acting chairperson of the National Women's Commission.  “Increasing population and lack of job opportunities have caused the rise in the number of VAW cases,” she added.

Especially young people have been filing the cases of VAW. The issue of domestic violence is higher in love marriage than arranged marriage, said Ghimire.

“Cases of VAW are also seen frequently in the educated family. However, VAW and domestic violence are highest in the poor and uneducated households,” said Ghimire.

According to Ghimire, “Women are compelled to tolerate the domestic violence because they aren't self dependent. Having no rights over parental property and lack of job opportunity are making women endure the violence silently.”

She further said that women are discriminated since their birth.

“The constitution has given rights to women. Rules and regulation are all good but the problem is lack of implementation,” said Ghimire.

Int'l Day for Elimination of Violence against Women

Life becomes luxurious and easy with the help of science and technology. But, violence against women and girls is one... Read More...