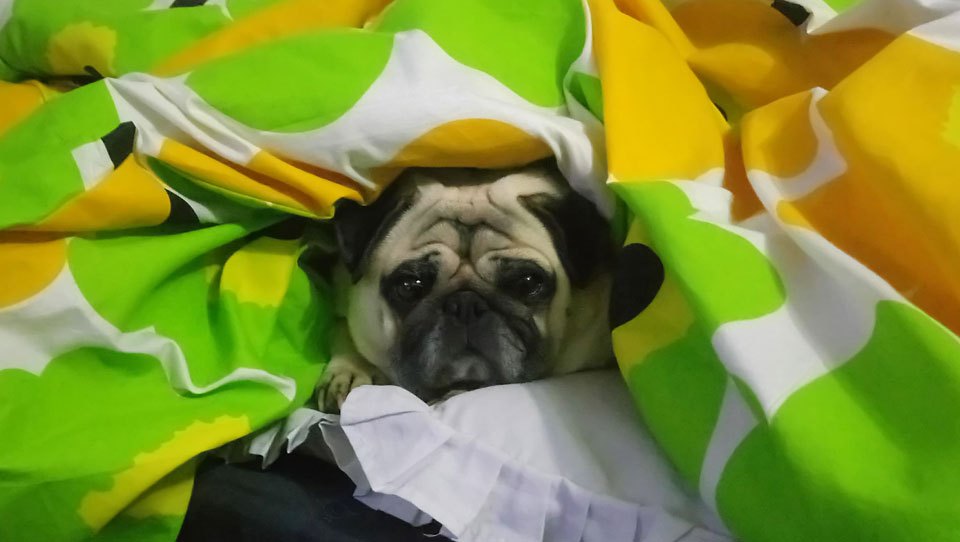 As humans, how we perceive the world is how we define our own reality. And for the vast majority of humans, perception is handled through sight.

Your hearing, and your senses of smell, taste, and touch also play roles — no doubt — but sight is the most immediate way we experience the world around us.

This isn't the case for dogs.

The adorable snout on your pup isn't just for petting — dogs "see" the world with their nose first. "We assume that non-human animals' perception would be kind of like ours, but simpler," dog cognition researcher Dr. Alexandra Horowitz told me in an interview last year.

But that isn't the case. Instead, dogs "see" the world through smells. Here's how it works.

"It's really hard to get outside our perspective."

"You could think of it as just another perceptual modality," Horowitz told me. "You can close your eyes. You're still having an experience as a human, and it's transformed in some ways. But there's still a room. There's still a reality — a room that you can hear, you can smell, you can touch. And even though it's not one that we're that familiar with, we're still co-existing."

That's the first way to understand how dogs see the world — close your eyes, maybe cover your ears with sound-canceling headphones. Now take a sniff! As humans, our sense of smell is nowhere near as adept as that of dogs — but you can begin to understand how a dog perceives the world. Maybe you smell something delicious, or something rotting, or the sterile blow of an office air conditioner.

"We basically have a cloud of smell around us. That's interesting, because it means a dog can smell you before you're really there," Horowitz said. "If you're around the corner, your cloud of smell is coming around ahead of you."

"Ultimately, their bigger interest is smell than vision."

Which isn't to say that dogs don't literally see you — their eyes are another form of input, just not the primary one. "They might look at someone with their eyes; as you approach, they look at you," Horowitz said. "But then once they've noticed that there's something with their eyes, they use smell to tell that it's you. So they sort of reverse that very familiar use of ours."

And that's crucial to understanding how dogs see the world.

You, as a human, might smell something delicious and then use your eyes to look around to locate the source of that delicious smell. "Ah, it's pasta sauce slowly coming together on a stove!"

For dogs, the opposite is true. Or, as Horowitz put it:

"We smell something and then when we see it we're like, 'Oh yeah, that's it. That's what it was. It was cinnamon buns.' And dogs when they see you, they're like, 'Okay, that's something to explore, I'm gonna smell it. Oh yeah that's Ben.'"

"Instead of all the things that are bouncing into my eyes when I sit in a room, I'm just perceiving that room through things — molecules of smell. That's really the transformation you have to make."

We perceive depth, as humans, through stereo vision — our two eyes triangulate on the world around us, and our brain converts that video feed into three dimensions. That same concept applies to dogs, except — once again — it's through scent rather than sight.

"Where something is in a room, or what something even is, kind of changes a bit if you imagine it as an olfactory precept instead of as only a visual precept," Horowitz said. To translate that a bit, your perception of the world fundamentally changes if it's viewed through the lens of scent.

It means not only do you perceive what's immediately around you, but also what was once around you and what's coming up. In this way, how dogs perceive the world is actually moredeveloped than humans — their sense of smell doesn't just alert them to the present, but it alsotravels through time.

Dog noses are the perfect shape for identifying smell.

Due to the shape of dog noses, the way they intake air and expel breath encourages a more developed sense of smell. It's actually the latter effect that enables more new odor molecules to be absorbed on the next breath — and it's the same reason why dogs get so ridiculously close to things they're smelling.

As a dog expels breath from their nose, an air current is created that actually kicks up more new odor molecules. As the dog takes its next breath, it's absorbing the molecules that it kicked up when expelling its last breath. Through this system, dogs are not only sniffing but actively enabling "better" sniffs.

Dogs have far more smell receptors than humans, and they also have an organ we don't that's specifically used for smell perception.

Beyond the shape of a dog's nose determining how well it can suss out scents, the internals are crucial.

This is why a dog might eat something it shouldn't — it's an attempt to learn more about that object. It also might just be hungry and ambitious.

"Smell is just information for them, the same way that we open our eyes and we see the world."

Notably, dogs are unlikely to classify scents as "good" or "bad." In the same way you don't look at feces and shudder, a dog is unlikely to sniff feces and immediately back off.

"We don't have a great vocabulary for smell, so we do end up saying that's a really great smell, or that's a horrible smell," Horowitz explained. Unless you're someone who specializes in scent — a perfume scientist, for instance, or a wine sommelier — you're unlikely to have a highly-developed sense of smell when it comes to descriptions. I smell fresh baked bread and react with, "That smells delicious!" A dog might react with, "That smells like flour and water and yeast and heat."

Horowitz described the effect as such: "We might try to say what the smell is of, but we're often not even good at that. 'I recognize that smell, I don't know what it is.' Since we don't have a vocabulary, and most of us aren't primarily using smell, we tend to think of smells as good or bad."

But for dogs, it's just information. That's why they put up with your post-workout stink in the same way they're happy to stick their nose directly into a pile of poop. No judgment — just information.

From the way you move and sleep, to how you interact with people around you, depression changes just about everything.... Read More...

Indonesia police chief, others removed over soccer disaster
21 minutes ago