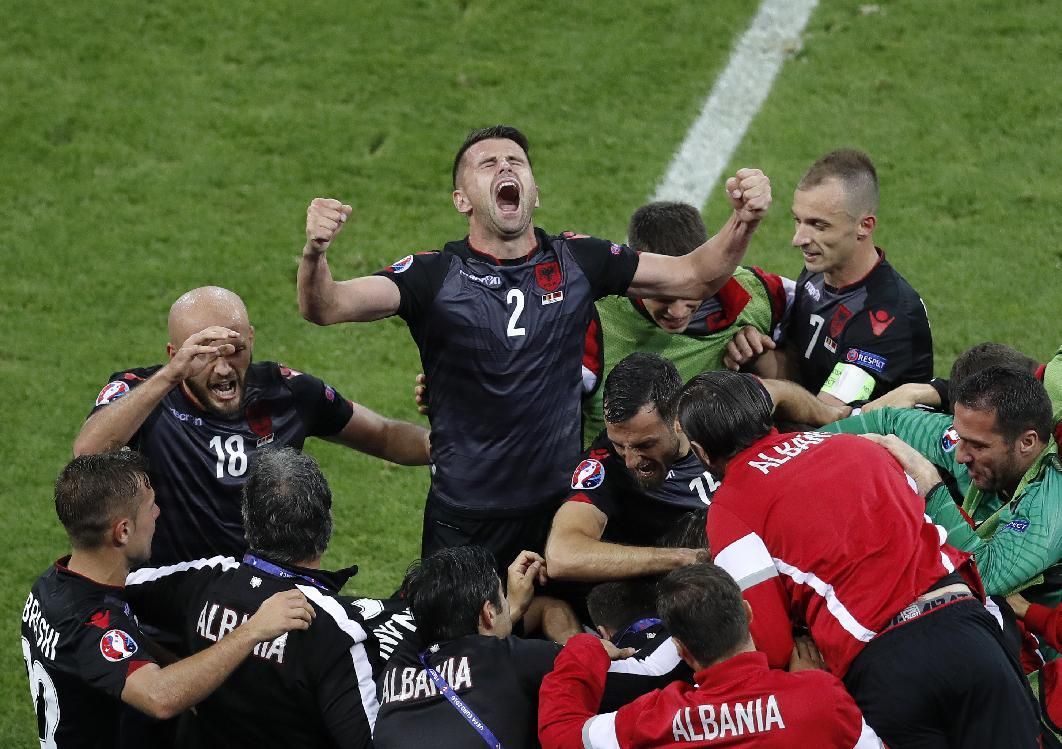 LYON, France, June 20: It's going to be a long three days for Albania as the small Balkan country waits to find out if it's to qualify for the knockout stages of the European Championship.

Albania kept its hopes of qualifying for the round of 16 alive with a 1-0 victory over Romania on Sunday, a result that eliminated its opponent.

The result meant Albania, playing in its first major tournament, went above Romania in the group rankings into third place with three points, and still in with a chance to make the round of 16.

"It was historical for us to reach the European Championship's final stages, and finally we have won the three points," Albania center back Arlind Ajeti said via a translator. "We have made history."

Ajeti and the Albania team will have to wait until the group stage of Euro 2016 finishes on Wednesday before it finds out whether it will be one of the four third-place teams to make it through to the next round.

Albania's future in the competition depends on what happens over the coming days but coach Giovanni De Biasi said his team will be preparing as though it has another match to play.

"If we stay in the tournament we will be trouble to other teams, to important teams, because today we got some more confidence, we needed the first two games to settle in," he said via a translator.

Albania's defense has impressed in Euro 2016 and the team stuck to the same type of game plan it used in its two hard-fought losses to Switzerland and France.

Armando Sadiku scored the sole goal in the match and Albania's first in an international competition in the 43rd minute with a header.

Ledian Memushaj picked out Sadiku drifting at the far post with a well-placed cross that the striker coolly nodded back over goalkeeper Ciprian Tatarusanu, who had left his line.

"Tonight we won with heart and with quality," De Biasi said. "We didn't get many chances, we played with our head, with mental strength."

Romania strived to get back on equal terms but failed to produce many chances, its best effort coming in the 76th minute when substitute Florin Andone hit the crossbar with a fierce. Otherwise, Albania contained Romania while Sadiku continued to trouble Romania's defense. Romania was eliminated after only earning one point in its three matches.

"I can't find the words to express what I'm feeling right now and the fact that we've disappointed millions of people who believed in us," Romania defender Nicolae Stanciu said. "I think we controlled the game but we didn't manage to create clear chances — we weren't decisive enough in front of goal."

Albania's players celebrated the historic victory with their Italian coach after the final whistle, while the team's large contingent of fans cheered wildly at the Stade de Lyon.

"A very happy moment to see all the Albanians, to make them happy and see them rejoicing," goal scorer Sadiku said.

As humans, how we perceive the world is how we define our own reality. And for the vast majority of... Read More...

My claim for the post of General Secretary is natural: Leader Pun
32 minutes ago