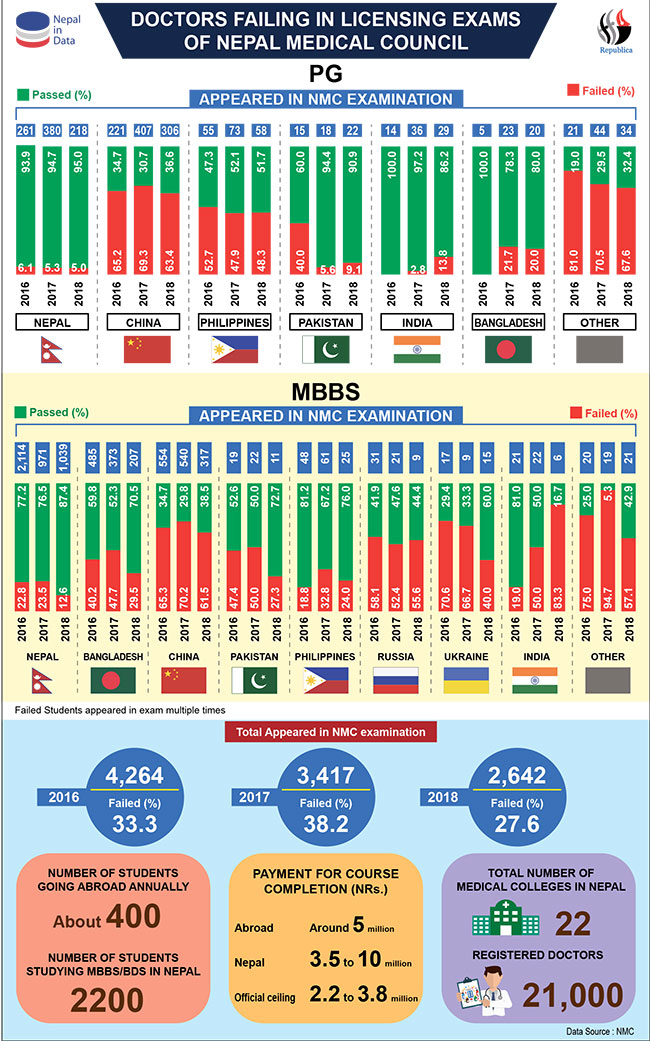 KATHMANDU, Sept 7: The number of doctors failing in the licensing exam administered by the Nepal Medical Council (NMC) is higher among those who studied in China, Russia, Kyrgyzstan, Ukraine and the Philippines. The pass rate for medical students who studied in Nepal is higher in comparison to those studying in various other countries. According to NMC, a total of 592 postgraduate doctors took the licensing exam in 2016 but 212 failed. Passing the test makes one eligible for practicing medicine in Nepal. 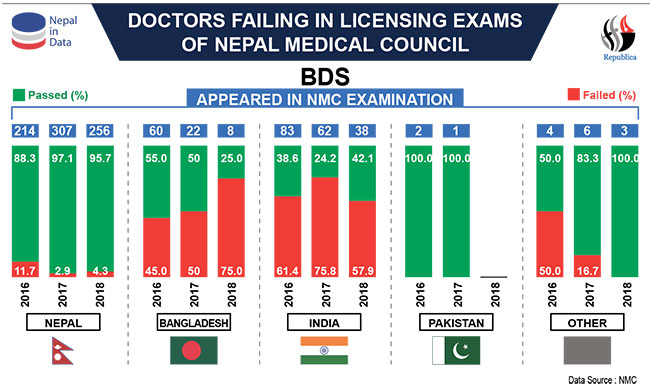 Dr Dilip Sharma, registrar at NMC, said that students who could afford to study medicine abroad although they had less marks are the ones who tend to fail the licensing exam. “Our test questions are standard and doctors who completed their studies but did not undergo proper internship fail the licensing exam,” he said.
At the same time, foreign universities allow Nepali students to pass even though their performance is not good since they think that these students will be returning to Nepal to practice their medicine, said some doctors requesting anonymity.

Students who went to study medicine abroad before 2016 failed the NMC exam as an eligibility test prior to going abroad was not mandatory then, said Dr Sharma. “Higher number of doctors will pass the exam after 2022 as students who went after 2016 will start returning in 2021 after completing their five-year course,” he added.

The number of students going abroad to study medicine decreased after NMC enforced a rule in February 2016 requiring students to pass an entrance exam before studying medicine in foreign universities.
Figures provided by NMC show that over 300 students were given eligibility certificates in 2016 for studying medicine abroad at undergraduate and postgraduate levels. At present, the number of medical students going abroad annually hovers around 400.

Students must pass the merit test administered by the Institute of Medicine (IOM) under Tribhuvan University or by Kathmandu University to study medicine abroad. IOM has set a minimum standard of 50 percent for the MBBS.

A student going abroad to study undergraduate medicine has to pay around Rs 5 million while a student in Nepal pays Rs 3.5 million to Rs 10 million. The official range is Rs 2.2 million to 3.8 million.

There are 22 medical colleges including private ones across the country. Some 21,000 doctors are registered with NMC. Officials at NMC said some 2,200 students are enrolled in MBBS and BDS colleges inside the country.

KATHMANDU, Nov 6: The training sessions for the Nepali national cricket team that have been affected by the COVID-19 pandemic... Read More...

KATHMANDU, Sept 30: With the increasing number of rape cases in society and extensive reporting on the crime, rape has... Read More...