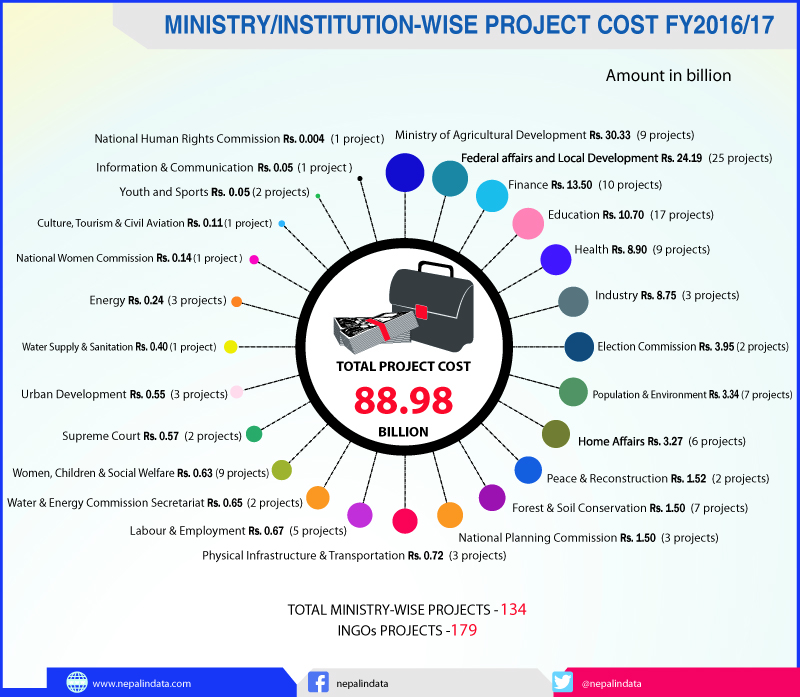 According to the Statement of Technical and Other Assistance published by the Finance Ministry, the INGOs are spending Rs 88.98 billion on 18 various  ministries including the Ministry of Home Affairs (MoHA), and on the Supreme Court and the National Human Rights Commission. This indicates that the government’s repeated attempts  to control the activities of INGOs within the ministries have gotten nowhere.

Former chief secretary in the government Leela Mani Paudyal had taken a decision not to accept any assistance from INGOs at the Office of the Prime Minister and Council of Ministers. “The decision not to take any assistance from donors and INGOs at the prime minister’s office was the first decision I took after assuming  office as chief secretary,” said Paudyal over the phone from Beijing, where he is currently serving as Nepal’s ambassador to China.
“Various influential persons including parliamentarians, ambassadors and others exerted  pressure on me through the prime minister to revoke that decision. But they eventually relented as I insisted that Nepal was capable of running the prime minister’s office on its own.”

According to Paudel, it took six months to sideline the support of donors and INGOs from the prime minister’s office. He argued that donors and INGOs should be kept away from the country’s policy-making bodies, including the prime minister’s office, parliament, the Supreme Court, ministries dealing with security, the president’s office and the offices of the speaker and the chief justice.

Paudyal recalled that his efforts to prohibit the involvement of donors and INGOs in such government bodies eventually failed due to pressure from various quarters including the political leadership.

The government bodies are keeping mum even as the donors and INGOs are investing in policy-making bodies rather than  investing in infrastructure and other development activities. Although the Prime Minister’s Office is continuing with the  tradition started by then chief secretary Paudyal, the donors and INGOs are influencing  policy-making through their investment in 18 government ministries.

As many as 179 INGOs are running 134 projects amounting to Rs 88.98 billion in the 18 ministries. According to details available in the Finance Ministry report, the projects will run till December, 2018.

Acting Secretary at NPC Tirtha Dhakal agreed that the entry of donors and INGOs in the policy-making bodies of the country is wrong in principle. “They should not be allowed in even if only because of reasons of  secrecy and security,” he told Republica. “They are found to have been increasing their pressure for carrying out  works suited to their own interests. This has been the practice here since 10-12 years back.”

Similarly, during the same period, INGOs and donor countries  spent a total of Rs 3269 billion on six projects at  MoHA. ADB, UNDP, the United Nations Children’s Fund (UNICEF) and countries like China, the UK, Japan, and South Korea among others have been investing at MoHA under  various project heads.

Likewise, the UK and UNICEF have also been spent millions on the  Nepal Police for ‘modernizing and improvements’ as well as for tackling gender-based violence. From December 2014 until December 2018, Rs 132.03 million is being spent on Nepal Police. ADB is also spending
Rs 51 million, to  combat violence against women and children with ‘technical help and capacity building’.

Two projects, budgeted at  Rs 572 million, are ongoing at the  Supreme Court (SC). Denmark is running a  Rs 3.6 billion project to ‘establish rule of law’ and ‘safeguard human rights and increase security capacity building’. The project  started in 2013 and is ending in December.  Japan is spending Rs 190 million ‘to increase SC’s capacity in conflict management’.

According to Supreme Court spokesperson Mahendra Nath Upadhyaya, those projects are being run   to help the court. “There are two programs being runs with the support of UNDP and JICA. One is being implemented under the registrar,” he told Republica. “There is no point making this an issue since these are joint projects of the government of Nepal and  UNDP. These projects are really meant for supporting the court.”

The Election Commission, likewise, has two projects of Rs 3.95 billion in total, funded by INGOs and donor countries. The European Union, the UK, Norway, Denmark, Australia, Japan, and the USA are spending  on the EC to help in the ‘election process and capacity building’.

Former minister Prakash Chandra Lohani described the situation as terrible and said, “It is a shame that those INGOs are operating freely without government control. They are in a position to run the country.” He further said that controlling the INGOs might be difficult, but  the country has no choice but to adopt a stern policy against them.

Nepali Congress (NC) lawmaker Gagan Thapa had urged   parliament during its first meeting after the second Constituent Assembly election not to allow entry of any donors and INGOs. “I raised this issue after learning that some INGOs had even prepared the CA Regulations. My statement stopped that,” Thapa told Republica. “It is high time we spelled out where  donors and INGOs can spend or provide assistance. We may not be able to handle them if this matter is delayed further.” Thapa said the government is already late in discouraging the current practice of seeking foreign aid even for minor works.

What has influenced you the most in life?

The environment children grow up in and the things that surround them during their childhood shape their lives to a... Read More...

Rohini Pande, Professor of Public Policy at Harvard Kennedy School and Co-Director of Evidence for Policy Design, is reputed for... Read More...