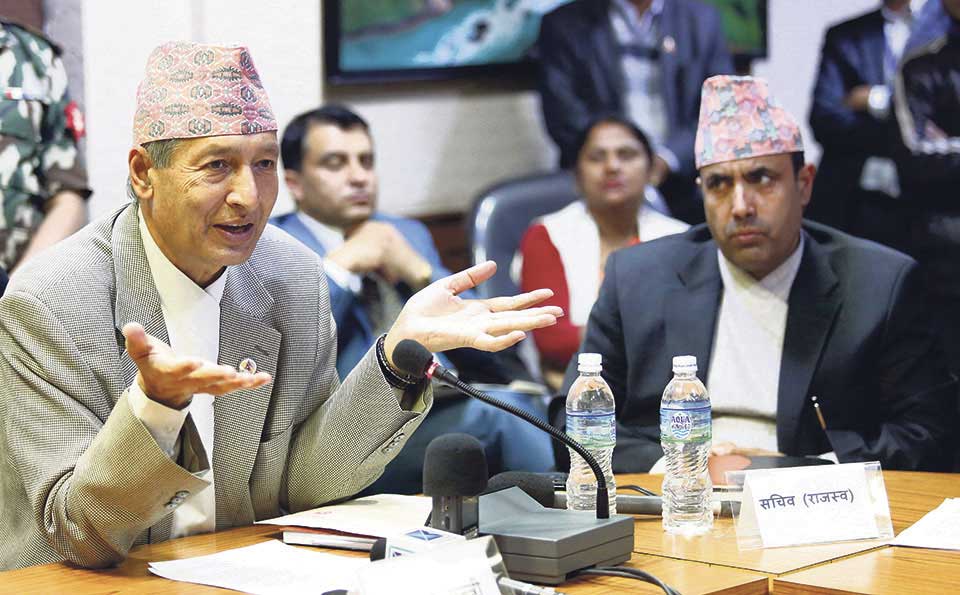 There is a debate raging in the country about the state of the economy. The government’s White Paper declared in no uncertain terms that the country is heading towards bankruptcy, financial indiscipline is rampant and virtually uncontrollable and project implementation and delivery capacity of the government has nosedived.

The tenor of the paper seemed to put the blame on previous governments, the last one under leadership of Nepali Congress. The finance minister seems to have forgotten that since the last few years the country has been ruled by three parties—CPN-UML, Maoists and Congress. Therefore for the deplorable situation of the country that he powerfully projects apart from Congress and Maoist his own party—UML—is also responsible.

Where is the money to finance new political and physical infrastructure including the salary and perks of thousands of newly elected officials?

Congress party seems to have come to the conclusion that the white paper is an indictment against it. Some Congress stalwarts have come to the defense and have argued that the economy is in good shape. Instead of a dispassionate analysis of the current situation, the argument is that the government has published the white paper just to discredit Congress and assert ‘holier than thou’ attitude of the leftist forces now in power.

Half full or half empty?
The debate is suggestive of describing a half-filled glass of water: one side views it as half empty while the other sees it as half full. Both are right and yet the perspective that they bring in describing the situation is based on different views of reality.

For those who see the glass half full there is no dearth of statistics to prove their point.  Irrespective of rising trade deficit the foreign exchange reserve of the country is satisfactory. While it is true that there is unemployment in the country and over three million young men and women are working outside Nepal, mainly in the Gulf States, mostly as unskilled laborers, it should not be a cause to worry. We live in a globalized world and it is quite normal for our young people to seek employment in other countries.

The remittance they send back home has helped to reduce poverty and has contributed to the increase in our banking infrastructure, new investments in shopping malls and numerous hospitals and other health facilities and even expensive private schools where the registration fee alone can be as high as Rs 1,00,000.  Our fast increasing imports has been a source of rising revenue for the government.

In the meantime, electricity supply has improved and there are some indications of increase in industrial production. Our development partners are willing to help us and are ready to increase their contributions to our development projects. In the social sector our progress has been impressive: The longevity of an average Nepal is close to 68 years.  As for rising trade deficit, that should not be taken too seriously because our debt to GDP ratio is still well below countries at our level of development.

We are making progress in tourism. No matter how polluted Kathmandu is, tourists are pouring in. As for economic discipline in the government there are already half a dozen reports written by both Nepali and foreign experts. Does not that show our seriousness in solving the problem? Therefore anyone who sees the glass as half empty has a negative attitude and is ignoring all the good things that are taking place in the country.

For those who see the glass as half empty too the statistics are impressive to prove their point.  Our trade deficit is increasing at an alarming manner that is simply not sustainable for the future. Even our prime minister seems to be aware of this reality.  The scale of out migration for jobs because of the sluggishness of the national economy poses the danger of Nepal turning into a nation of only children and old people.

For the first time in many years foreign exchange reserves are declining. We call ourselves an agricultural nation but a look at our import bill shows that our reliance on India from rice to vegetables to meat or fruit is increasing every year. The unpleasant reality is that the agricultural sector remains weak and anemic.

The contribution of manufacturing to GDP continues to decrease leading to forced out migration of labor. Regular government expenditure is rising faster than revenue. On the other hand, a significant percent of budgeted capital expenditure remains unspent. Even when it is spent the rising level of corruption and culture of impunity virtually assures that a large percentage is pocketed by a new corrupt elite consisting of politicians, bureaucrats and businessmen in the name of the downtrodden and the poor.

Government corporations have become a “hunting ground” of income for the new elites. Huge amount of resources is funneled in projects that are not even mentioned in the annual budget ratified by the parliament. This is blatantly illegal but in the name of democracy and the “mandate” of the people neo-feudalistic mentality of the worst kind has become a new normal. A culture of impunity is the only culture that is gaining roots in the nation. It is a culture based on a neo-feudalistic mindset that allows the rulers to view the people as commodities that can be manipulated for the benefit of the few at the cost of the many.

We now have a federal structure but financial implications of this new venture have not been worked out. Where is the money to finance new political and physical infrastructure including the salary and perks of thousands of newly elected officials? Of course, the government can increase the size of its deficit but it may not be possible because it is already too high. If this consideration is ignored what effect will it have on prices, trade deficit, foreign exchange reserves and ultimately the exchange rate? When we consider these questions it is clear that the process of the glass being empty has gained momentum.

Difficult road
The question posed at the beginning of this article has to be viewed in a dynamic frame of reference. The trend in governance of the country during the last few years has been characterized by a “warlord mentality” where those who got the chance to lead the nation have taken it as one more opportunity to enrich themselves and their cronies while proposing phony slogans and engaging in all sorts of tall talks about uplift of the poor.
But hypocrisy after a certain point can turn into a form of madness where the actor fails to distinguish illusion from reality. And the reality is that the process of governance so far is strengthening the rot within. Let us hope that the new government is aware of this reality. What is in short supply are not even resources but the commitment, integrity and a deep sense of responsibility to build the country and bring smiles and hope in the face of millions.

The author is the chairman of Ekikrit Rastriya Prajatantra Party (Rastrabadi)