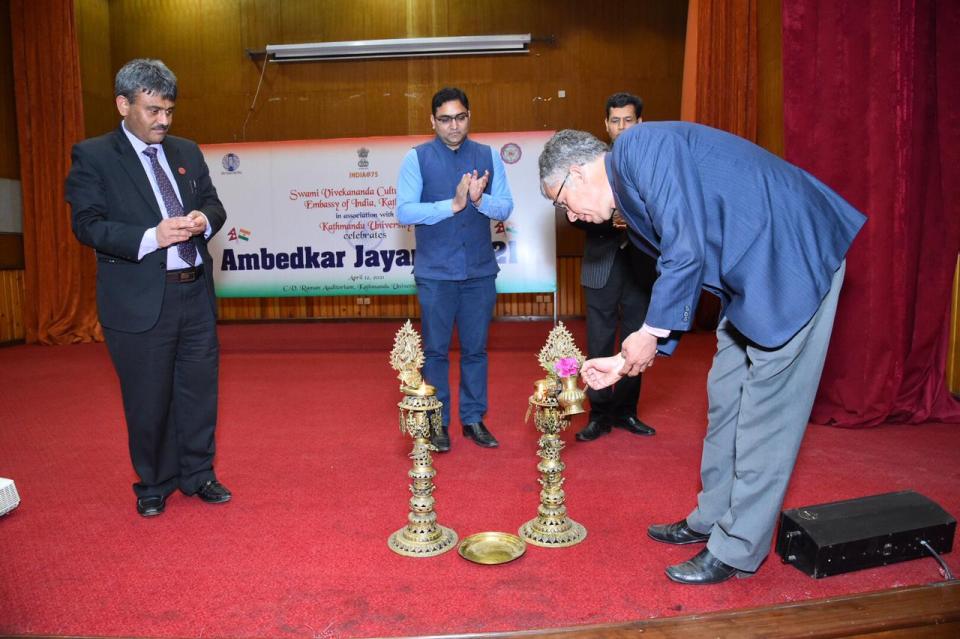 KATHMANDU, April 13: The Embassy of India, Kathmandu, in association with Kathmandu University on Monday celebrated Ambedkar Jayanti and organised a discussion on the relevance of Baba Saheb Bhim Rao Ambedkar in today’s world as part of the ongoing celebration of ‘India@75’ to mark 75 years of India’s independence.

According to a press statement issued by the Embassy of India in Kathmandu, the event was attended by Vice-chancellor Dr BholaThapa, Dean of School of Law Dr Rishikesh Wagle, Professor at Kathmandu University Dr Uddhab Pyakurel and First Secretary (PIC) Naveen Kumar and Dr Kedar Nath Sharma from the Embassy of India. The event was also attended by the students of Kathmandu University.

In his remarks, Vice Chancellor Dr Thapa emphasized the role of Baba Saheb Bhim Rao Ambedkar as the maker of modern India and his contribution to the social upliftment of the marginalized sections of society.

In his welcome remarks, First Secretary (PIC) Kumar encouraged students to follow the ideals of ‘Baba Saheb’.  Dr Rishikesh Wagle emphasized the role of the Constitution of India in the political and socio-economic transformation and integration of India with particular mention of the role of Dr Ambedkar.

A documentary movie on Baba Saheb Ambedkar titled ‘Mook Nayak’ was also screened on the occasion, according to the statement.

Nischhal Pradhan was like any other kid who liked taking pictures at family gatherings. He started out by clicking people... Read More...

What next: Midterm elections or a full-term Oli govt?
17 hours ago

KP Oli sworn in again as PM, no new faces in new cabinet
22 hours ago